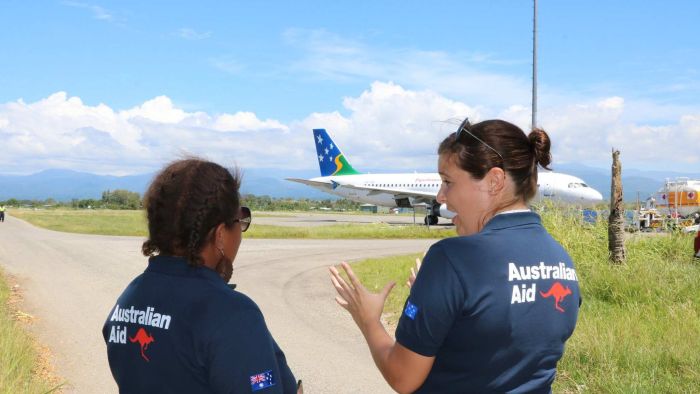 Key points:While official aid funding has decreased, the Budget includes a virtual increase in aid via a one-off coronavirus packageAustralia’s tourism-dependent Pacific neighbours are struggling with the economic fallout of travel restrictions due to the pandemicAnalysts and stakeholders have expressed disappointment at reduced development assistance for Asia and other regions

After years of cuts the official aid budget stands at $4 billion, down by $44 million from last year.

But alongside the decrease outlined in the Federal Budget, the Government announced a $305 million COVID-19 response package for the Pacific and Timor-Leste.

In its budget briefing the Department of Foreign Affairs and Trade said the package is supplementary funding for the next two years and is separate to the aid program.

Foreign Minister Marise Payne said in a statement: “It will help address the economic and social costs of the pandemic in the Pacific and Timor-Leste, helping to underpin our region’s stability and economic recovery.”

The separate, supplementary package has some development and foreign affairs observers scratching their heads.

“When you look at it, it is aid,” said Stephen Howes, director of the Development Policy Centre.

He said the COVID-19 package is good news for the Pacific and Timor Leste, even if the Government claims it does not represent an increase in the aid budget.

“I guess the Government wants to present it as temporary or doesn’t want to be attacked for increasing aid at this time of domestic economic need but given the needs in our region it’s a good thing we have increased aid,” he said.

In previous years the Government’s Pacific step-up policy has protected the region from aid cuts and that is still largely the case.

Papua New Guinea remains the largest recipient of Australian aid with $596 million. In the Pacific, Solomon Islands is next with $157 million.

DFAT said the programs in Solomons and PNG have both fallen by around $20 million because of the completion of the Coral Sea underwater cable project.

Aid programs to Vanuatu, Fiji, Samoa, Tonga and Kiribati have been increased.

Jonathan Pryke, director of the Lowy Institute’s Pacific Islands Program said the ongoing Pacific focus of Australian aid will be welcomed in the region but Pacific leaders are really waiting for the return of Australian tourists to reboot their battered economies.

“The bigger prize is to just get these borders back open as quickly as possible with Australian and New Zealand,” he said.

“That isn’t going to come from the aid program, that’s going to come from keeping our COVID numbers down here, and goodwill from governments in the Pacific and Australia to get moving on opening those borders as quickly as possible.”

The 2020 Federal Budget explained:Pacific step-up at the expense of other regions

The continued focus on the Pacific has again meant reductions in funding to other parts of the world.

“In the Philippines, with a strongman in charge, and in Indonesia, with the potential polarisation in these countries, the pandemic is going to be able to sow seeds of discontent,” she said.

“Then you add the economic downturn in each of these countries to that, and that would be a recipe for instability. So Australia really should step up at this point.”

Professor Yap said Australia was looking at aid as charity, “which is exactly what it is not”, and ignoring the potential to help development of close neighbours into possible future markets.

Some Australians have criticised Indonesian military spending on Twitter and other social media, saying the relief money for disasters should be taken from the country’s military budget, and not provided by foreign aid.

Pasanna Mutha, policy and government relations manager at Plan International Australia, said it was great to see $65 million allocated to address gender-based violence and women’s economic empowerment in the Pacific and South-East Asia.

But she said funding allocated for women sometimes meant that adolescent girls “fall through the cracks”.

“In the Pacific, especially … the rates of secondary school enrolment for adolescent girls is really low. And with the lockdowns, and so many school closures, we’re going to see a huge number of girls not returning to school,” she said.

“We’ve seen that over a number of years in our international development program that the focus has shifted away from Africa, which is unfortunate, given that there are high numbers of displaced people in the in the continent, and the growing food crisis.”

Aid to south and west Asia has been slashed by $72 million with Afghanistan and Pakistan the big losers.

Australia’s funding to the Middle East and Africa has been cut in half and now stands at $93 million.

The CEO of the Australian Council for International Development Marc Purcell said the cuts are disappointing, particularly those in Asia.

“Without some increase overall what we are seeing is the erosion of Australia’s aid program in different countries,” he said.

“For example in Afghanistan, where so many Australians have fought bravely with Afghan people, and we said we’d never cut and run, aid has been cut by 34 per cent.”