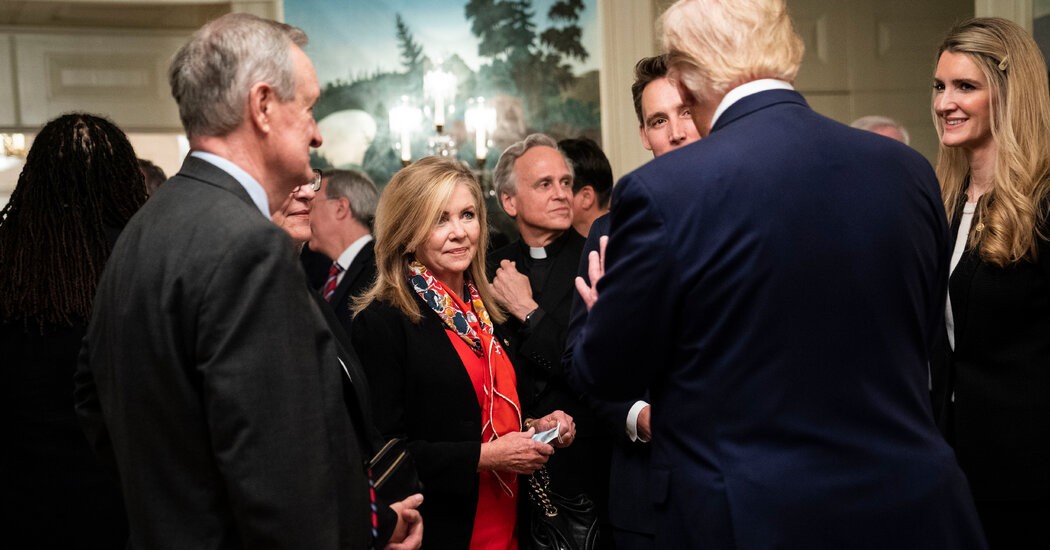 SOUTH BEND, Ind. — As college leaders deliberated whether to bring students back to campus, none led the charge for reopening more forcefully than the president of the University of Notre Dame.

The Rev. John I. Jenkins, the university’s president and a 66-year-old Catholic priest with degrees in philosophy and divinity, was among the first to invite students back for dorm life, intercollegiate sports and face-to-face classes, arguing in a New York Times Op-Ed in May that the college had a moral obligation to not be crippled by fear. He also seemed humble about the challenge: When he forgot social distancing rules as he posed for pictures with students returning to campus in August, he issued a public apology.

But all the humility in the world might not have spared Father Jenkins from the storm of protest he now faces over the latest news from South Bend: that he not only violated his own health rules — appearing without a mask at a White House reception last month for Judge Amy Coney Barrett, a Supreme Court nominee and former Notre Dame Law School professor — but also is infected with the coronavirus himself.

Students have petitioned for his resignation, angry over what they consider his hypocrisy as well as the rising tide of infections on campus. Others have reported him to a coronavirus hotline for violating his own mask mandate. The student newspaper called the affair “embarrassing” in an editorial. And the faculty senate stopped one vote short on Tuesday night of considering a vote of no confidence in his leadership.

“I haven’t seen people this outraged in my whole career and I’ve been here since 2001,” Eileen Hunt Botting, a political science professor, said.

Neither Father Jenkins nor the school spokesman, Paul Browne, responded to requests for comment. “I regret my error of judgment in not wearing a mask during the ceremony and by shaking hands with a number of people in the Rose Garden,” the school president said in a statement posted last week on the Notre Dame website. “I failed to lead by example, at a time when I’ve asked everyone else in the Notre Dame community to do so.”

In a follow-up email to students and faculty on Friday announcing that he had tested positive for the virus, Father Jenkins and the school’s communications staff wrote that he had been tested after learning that “a colleague with whom he has been in regular contact” had the virus.

In a Zoom meeting on Tuesday night, the faculty senate voted 21-20 after raucous debate to postpone the proposed no-confidence vote while they gathered more feedback. A second motion to consider commending the president, who was not in attendance, failed overwhelmingly.

Comments from faculty members distributed at the meeting included expressions of empathy for Father Jenkins, who is certainly not the first college president to get the virus. “Father Jenkins is already sick,” one faculty member wrote. “That is enough punishment.”

But many others bristled with resentment that he visited Washington when their own travel has been forbidden.

“I have not seen my aging parents in over a year,” one faculty member said. Others said they had canceled research trips and vacations. One had missed the birth of a first grandchild.

In an interview, Dr. Hunt Botting, who is not a member of the faculty senate, said Father Jenkins had not only failed to practice what he preached, but also opened Notre Dame’s reputation to political exploitation by seeming to endorse both President Trump’s court nomination and his resistance to face masks.

“This calls into question not only his ability to carry out rules he imposed on faculty, staff and students but also his ability to steer clear of overtly politicized events such as the one at the Rose Garden,” she said.

A petition calling for Father Jenkins’s resignation and signed by more than 200 students was rejected last week by the student government. But Ashton Weber, a 20-year-old economics major who drafted the petition, said she planned to revive and circulate it among faculty, staff and parents.

“I do recognize that having a professor and alumna nominated to the highest court in the United States is a really big honor, but there’s completely a double standard,” Ms. Weber said. “Students have been dismissed for this type of thing.”

About 770 Notre Dame students on the 12,700-student campus have tested positive for the virus this semester, according to the campus dashboard. An internal federal government report from last month showed surrounding St. Joseph County as being a major coronavirus hot spot, citing returning Notre Dame students as a possible source of community infection.

Notre Dame required students returning to campus to be tested for the coronavirus before the start of the semester in early August, and then to make themselves available along with faculty and staff for random surveillance testing, regardless of symptoms. Athletes were also tested regularly under N.C.A.A. rules. Masks have been mandatory on campus, indoors and outdoors.

But the university’s health protocols still fell short of the rigorous testing, tracing and isolation standards recommended by experts. Many students also found the rules imposed by Notre Dame unsustainable. Cases surged so steeply in mid-August that the school switched for two weeks to all-remote instruction, ordered students to stay in their residences and threatened to send violators home.

Last month, an outbreak on the football team left dozens of players infected or sidelined in quarantine and prompted Notre Dame to postpone a game that had been scheduled for Sept. 26, the day Father Jenkins went to the White House.

In his message last week, Father Jenkins — who faced criticism from conservatives in 2009 for inviting President Barack Obama to deliver the commencement address — said he felt compelled to attend “to support a faculty colleague and alumna of Notre Dame who is greatly respected by academic and judicial peers, revered by her students and cherished by her friends.”

When he arrived at the White House, he said, he was given a rapid-results nasal swab test and directed to wait, masked, until negative test results cleared him. From there, he was escorted to the Rose Garden, where administration officials, supporters of Mr. Trump and friends of Judge Barrett had gathered to cheer her nomination.

Photographs show Father Jenkins seated between Franklin Graham, the evangelical leader, and G. Marcus Cole, dean of the Notre Dame Law School. No one around them is wearing a mask except Mr. Cole. Following the Rose Garden event, Father Jenkins attended a reception in the Diplomatic Reception Room of the White House, where photographs also show that he did not wear a mask.

Since then, a growing list of attendees have confirmed testing positive for the virus, including Mr. Trump; the first lady, Melania Trump; Senators Mike Lee of Utah and Thom Tillis of North Carolina; Chris Christie, the former governor of New Jersey; Kellyanne Conway, a former counselor to the president; and Greg Laurie, a California megachurch pastor.

Mr. Cole did not respond to a request for comment. At least 10 Notre Dame faculty members besides Father Jenkins attended the event and all except him have repeatedly tested negative for the coronavirus since returning to South Bend, according to two members of the delegation who asked that their names not be used, citing campus backlash.

The decision not to wear a mask, the faculty members said, stemmed not from politics but from a desire to politely blend in, as a guest at a cocktail party might remove a tie upon realizing everyone else was dressed in business casual. And they are regretful.

“In the light of the reactions and publicity and fallout for the university as a whole,” said one faculty member, “I do wish the whole thing had played out differently.”

On Tuesday, as the campus counted down to this weekend’s football game with Florida State — whose own president has tested positive for the virus — masks were ubiquitous. Outside the library, under the school’s famed and towering mural of Jesus Christ surrounded by apostles and scholars, jugs of hand sanitizer and socially distanced Adirondack chairs studded the lawn.

Maggie Horan, 21, and Clarissa Younkle, 22, said the school’s pandemic restrictions had scuttled their plans for spring and fall breaks. “They have highly discouraged leaving St. Joseph County for any reason, except for pretty much a sick or dying relative,” said Ms. Horan, an international economics and political science major from Los Gatos, Calif.

Ms. Younkle, a biochemistry major from Green Bay, Wis., noted that under campus rules, a single negative rapid test is not enough to clear an exposed student from isolation. But Father Jenkins, she said, “used that as justification to go to this event and contradicted the policies that we’re being held to — it’s not fair.”

Colin Whitehead, 25, a graduate student in theology from Walled Lake, Mich., said that when his brother got married over the summer, he felt he should wear a mask, even during the wedding photos.

“But it was just so hard to keep it on when nobody was wearing one,” he said.

So did he approve of Father Jenkins’s conduct?

“Probably not,” he said. “But I really empathize with him.”

While a surge in coronavirus infections is forcing U.S. states and European countries to shut down bars, open field hospitals…

Referring to Fauci and other health officials as “idiots,” Trump declared the country ready to move on from the health…

It was a departure from last year’s first English exam, which stumped students but was cautiously welcomed by some teachers…