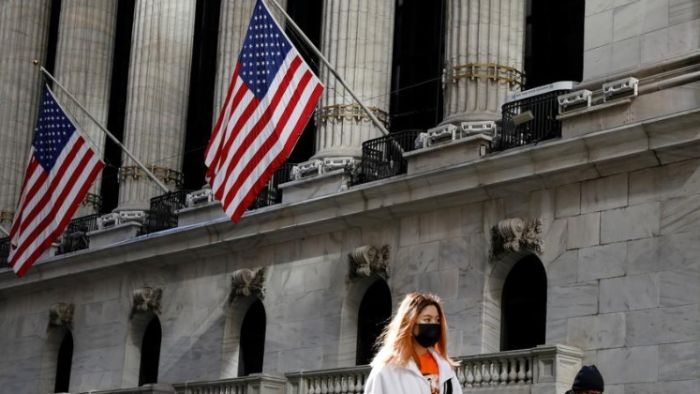 US stocks have rebounded after the US President called for more aid for the airline industry a day after putting stimulus talks on hold until after next month’s US presidential election.

Mr Trump wrote on Twitter that Congress should pass a $US25 billion ($35 billion) airline bailout, which was also supported by US House of Representatives Speaker Nancy Pelosi.

The US President also called on Congress to approve a $US135 billion payroll protection program for small business and stimulus cheques of $US1,200 for individuals.

Investors were heartened that some coronavirus relief measures remained on the table.

However, White House chief of staff Mark Meadows said he was “not optimistic for a comprehensive deal”.

And White House economic adviser Larry Kudlow played the prospects of a deal on CNBC.

“Right now in terms of the probability curve, this would probably be low, low-probability stuff,” he said.

Ms Pelosi and US Treasury Secretary Stephen Mnuchin have been unable to compromise on the $US2.2 trillion in aid wanted by the Democratic Party and the $US1.6 trillion that the White House will accept.

Chase Investment Counsel president Peter Tuz said measures that could be agreed on should be approved by Congress.

“Two elements that are needed are some kind of bailout for the airline industry, and additional aid to allow people to pay bills and buy groceries.”

“Those are things that are unequivocal and agreed on by both sides,” he said.

Airline shares jumped on the call by Mr Trump for aviation aid.

Eli Lilly rose 3.4 per cent after it said it had applied to the US Food and Drug Administration for emergency use of its experimental coronavirus antibody treatment.

Minutes from the latest meeting of the US Federal Reserve showed that many members of the policy-making committee said their economic outlook included additional stimulus spending.

They said if an aid package from Congress was too small or came later than expected, the economic recovery would be slower than anticipated.

This echoed the warning from Federal Reserve chairman Jerome Powell that the US economy would slip into a downward spiral if Congress failed to provide additional aid and lead to “recessionary dynamics.”

The Fed officials were divided over how to apply their new monetary policy approach amid the uncertainty over how to fight the coronavirus recession.

European shares failed to join the rally in global equities, weighed down by healthcare and blue-chip stocks.

The ASX 200 jumped by 1.3 per cent yesterday, boosted by the Federal Budget.

The Australian dollar has partially regained some of yesterday’s losses and is trading at around 71.38 US cents, up 0.5 per cent at 7:30am (AEDT).

The uncertainty around coronavirus relief measures and a bigger than expected rise in US inventories saw crude oil prices fall.

While spot gold rose on the uncertainty around new aid from Congress.

Don't Miss it Coronavirus: Donald Trump promises to make the COVID-19 ‘cure’ he had for all Americans | US News
Up Next Notre Dame’s President Faces an Angry Campus After Getting the Coronavirus