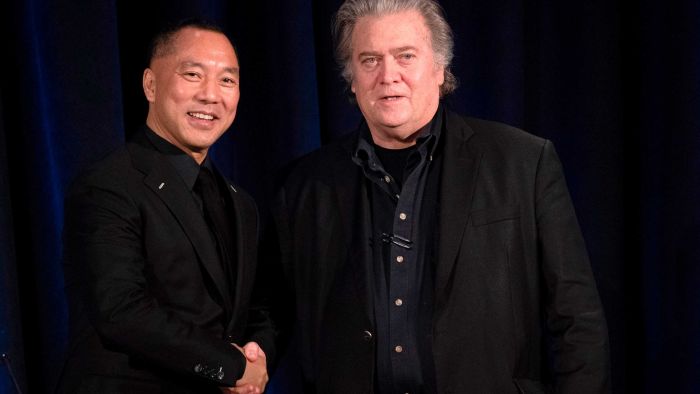 When Christine’s mother asked her for help printing political pamphlets about COVID-19, it took her by surprise.

She already knew her mum belonged to a new political group that aims to take down the Chinese Communist Party (CCP). Christine expected the fliers might be pro-US President Donald Trump or anti-Chinese Government.

She didn’t expect that they would contain COVID-19 health misinformation.

“I was pretty disgusted,” Christine said. “I didn’t actually know it was misinformation that could be harming people.”

Christine says her mother is involved with the New Federal State of China movement, which operates in Australia in part under the name Himalaya Australia.

The movement was launched on June 4 this year — the anniversary of the Tiananmen Square Massacre — by controversial Chinese businessman Guo Wengui and former White House strategist Steve Bannon.

Now it appears to be growing its activity in Australia. In recent weeks, pamphlets with a Himalaya Australia logo have turned up in letterboxes across Australia, while at the same time the group has grown its online presence.

A pamphlet with the Himalaya Australia logo found in a Sydney postbox.(ABC News: Supplied)

Christine said her mother had sometimes expressed anti-CCP views, but her beliefs became stronger after she joined this group in mid 2020.

“I’ve just been struggling with trying to be open and understanding of their views,” she said.

“I don’t feel I have the power to either fight against all these people who have money and have political power behind the scenes.”

An organiser of the movement in Australia told the ABC they have printed at least 35,000 pamphlets.

One version of the pamphlet claims to tell the “truth about COVID-19”. It asserts, without evidence, that the virus was engineered in Chinese military lab to “target” humans.

It also promotes Li-Meng Yan, a former University of Hong Kong postdoctoral researcher, who has been widely featured on US cable television claiming that coronavirus was artificially created.

Clips of the researcher’s appearance on Fox News were removed from Facebook for repeating information about COVID-19 “that multiple independent fact checkers say is false”, but a large network of Twitter accounts continues to share her other interviews.

Professor Edward Holmes of Sydney University, who was involved in mapping the virus’s genome, called her claims “fanciful but dangerous nonsense”.

“There are currently no convincing data to suggest that SARS-CoV-2 is anything other than a naturally emerging coronavirus,” he said.

The Australian pamphlets also spruik the anti-malarial drug hydroxychloroquine, with one suggesting it be available “over the counter”.

Hydroxychloroquine was promoted by President Donald Trump, but there is currently no evidence to support its use as a therapy for COVID-19, according to the National COVID-19 Clinical Evidence Taskforce.

Some of the pamphlets also suggest “high-ranking government officials” in China have not fallen ill from COVID-19 because they take the medication — an unverifiable claim.

Giselle, a co-organiser of the New Federal State’s Melbourne branch, told the ABC the group believes China has been hiding the truth about the virus and the pamphlets aim to expose that truth.

“We are not doing it for political reasons, we only wanted to tell people the dangerousness of the virus and we have to trace the origin of the virus,” she said.

With many Twitter accounts plus Mr Guo’s own media platforms regularly sharing anti-CCP and pro-Trump posts and videos, the movement has global reach.

A New Zealand branch recently hosted a rally, according to misinformation tracking organisation First Draft, and other events appear to have taken place in Japan, Spain, and Italy.

The group claims to have thousands of participants in Australia, but its true membership remains unclear. A channel for its Australian chapter on the chat platform Discord has more than 2,600 members, but that may include overseas participants.

Adam Ni, director of the China Policy Centre, said the New Federal State of China is responsible for a number of misinformation campaigns against the Chinese Government, including efforts to spread the baseless theory that COVID-19 is a weapon deployed by Beijing.

In his view, disinformation hurts Australia-China bilateral relations and makes it more difficult to have an informed public discussion about China. It also risks exacerbating racial prejudice against people of Chinese or Asian heritage in Australia.

“New Federal State of China, like any group, should have all the rights within the bounds of Australia’s democratic system, including the freedom to political speech and association,” he said.

“But its actions in pushing conspiracy theories on China, especially COVID-19 related ones, are harmful to Australia’s national interest.”

Mr Guo’s movement is a “vanity project” with little chance of changing politics in China, according to Dr Kaz Ross, who studies China and online extremism at the University of Tasmania.

Within Australia, she said its message about China and coronavirus was the “standard conservative anti-China line”.

“It is really the greatest hits from Trump and Falun Gong about the CPP,” she said, referring to the spiritual movement that has become a conservative media force in the United States.

In a recent video, Mr Guo discussed the group’s vision for Australia with a member of the local movement, Hong An.

Mr Guo claimed, according to a transcript of the video, that China has taken 100 per cent control of Australia “using economic incentives and bribes”. He also said he would soon announce big movements in Australia.

“If you take more actions, become more powerful … there will be more comrades in Australia.”

Mr Guo was businessman in China until he fled in 2014 accused of bribery and other charges, which he has denied, and attempted to seek asylum in the United States.

In the media and on his many online channels, he has cast himself as an outspoken freedom fighter — building a following among the Chinese diaspora for speaking out against the CCP and making allegations of corruption against party officials.

His activities have attracted retaliation from the Chinese Government, including an Interpol notice for his arrest and a disinformation campaign on Twitter and Facebook linked to Chinese state actors.

It’s alleged Mr Guo has various links with Mr Bannon, Donald Trump’s former chief strategist, and they have appeared in multiple online videos together — including about the New Federal State of China.

According to the Washington Post, Mr Guo has given Mr Bannon a consulting contract and announced him as chairman of a new social media company.

And when Mr Bannon was arrested in August for allegedly defrauding those who donated to a crowdfunding campaign for a US-Mexico border wall, the arrest happened on Mr Guo’s yacht.

Himalaya Australia has promoted the opportunity to invest in this company to its members. One document seen by the ABC describes a process for buying shares in GTV Media Group.

“GTV is a platform promoting truth against the CCP. It’s legally registered in the US and under the surveillance of the US law,” Giselle claimed.

Members of Himalaya Australia have claimed that local banks are blocking transactions associated with the company. The banks named, including the Commonwealth Bank, declined to comment.

An ASIC spokesperson said it is aware of media reports surrounding GTV Media Group, but would not comment further. GTV Media Group is not registered to trade in Australia.

Christine said she’s worried the group is exploiting distrust of China in Australia to spread misinformation.

“You can’t just be saying irresponsible things without thinking deep and hard about the effects on other people.”

Paul, who received a Himalaya Australia pamphlet at his northern Sydney home, said his first impression was that it didn’t look like a typical piece of junk mail — it was glossy and professional.

But he was quickly annoyed by its claims about hydroxychloroquine and the fact that it promoted Steve Bannon’s podcast.

“People in stress-related situations tend to believe what’s put in front of them,” he said. “I’d be just as concerned if I saw something pro-Russia.

“It’s just extremist bullshit. We don’t need any more of that kind of stuff around here.”

The ABC attempted to reach Mr Guo for comment.

Want more science from across the ABC? Science in your inbox

Get all the latest science stories from across the ABC.