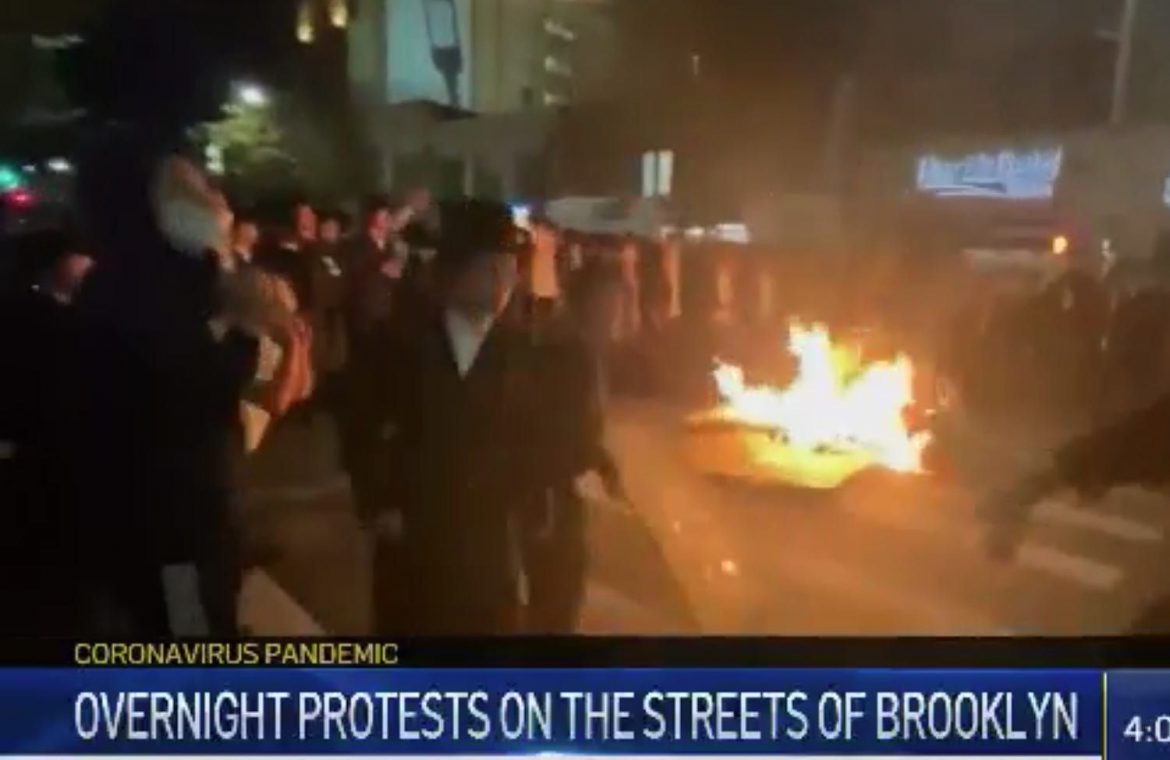 A Jewish journalist says Orthodox Jews assaulted him in Brooklyn.

Jacob Kornbluh, the national politics reporter for the Jewish Insider, said he was “hit in the head, and kicked at by an angry crowd of hundreds of community members” during a protest over coronavirus restrictions.

The incident occurred at protests following a decision by Governor Andrew Cuomo to enforce a local lockdown, closing schools and nonessential businesses.

During the protests, involving hundreds of Orthodox Jews who took a bonfire of face masks was ablaze in the middle of the street in Brooklyn’s Borough Park.

Leaders have called for communal peace.

A Jewish reporter said he was attacked in Brooklyn as tensions mount among New York’s Orthodox Jews over the best response to the coronavirus, which has hit the community hard since March.

Jacob Kornbluh, the national politics reporter for the Jewish Insider, covered the second night of protests on Wednesday in the neighborhood, opposed to a new local coronavirus restriction imposed by  Governor Andrew Cuomo.

Kornbluh, also a religious Jew,  has been prominent in warning the close-knit community about the public health dangers of COVID-19.

Kornbluh said a mob, incited by rabble-rousers, spotted and surrounded him. He said on Twitter that he was “hit in the head, and kicked at by an angry crowd of hundreds of community members” at a protest in Borough Park, a southwestern region in Brooklyn, New York.

He was also called a Nazi and spat on by his attackers.

On Friday, New York’s Mayor Bill de Blasio said he expected police to make an arrest for the attack soon.

Heshy Tischler, a pro-Trump Orthodox Jew and a Brooklyn City Council candidate leading the protests, was accused of whipping up the crowd against Kornbluh, calling him a “rat.”

Kornbluh did not go to the hospital after Wednesday night’s incident but said he has already pressed charges against Tischler, according to NY1.

On the same night, a group also chased down and assaulted a Jewish freelance photographer and a third man, the New York Post reported.

Borough Park is among nine NYC neighborhoods that have been ordered into lockdown to address localized spikes in coronavirus cases. The lockdown went into effect Friday.

All nine of the neighborhoods are home to Orthodox Jewish populations, and the lockdowns come during the celebration of the Sukkot and Simchat Torah high holidays. Gatherings in synagogues and yeshivas will be subject to strict social distancing restrictions.

Local leaders told the New York Times the spike in infections is partly due to their beliefs that they had achieved herd immunity and in various coronavirus misinformation spread by President Donald Trump. The president has overwhelming support in the Orthodox community, which traditionally backs conservative Republican candidates.

At a Tuesday night gathering in Borough Park, protesters lit a fire, and threw cardboard boxes and face masks into the flames, according to NBC New York.

Despite calls for peace from the community leaders, Orthodox Jews who have warned of the dangers have been increasingly targeted in person and on social media with the Yiddish insult of “moiser” — meaning informant to the enemies of the Jews, and in the traditional belief system, punishable by death.

Orthodox Jewish men move a wooden casket from a hearse at a funeral home in the Borough Park neighborhood which saw an upsurge of (COVID-19) patients during the pandemic on April 05, 2020 in the Brooklyn Borough of New York City. Spencer Platt/Getty Images

Several leading Orthodox rabbis have spoken out against the strife within the community and denying the coronavirus threat.

“This is wild, lawless, uncivilized behavior. Period, Flouting public health measures in a hotspot in the middle of a pandemic? It is the antithesis of the verse saying ‘what a wise, discerning people this great nation is,'” wrote Rabbi Mayer E. Twersky, a senior teacher at New York’s Yeshiva University, in an article on the Israeli news website, Arutz Sheva.

Don't Miss it ‘I’m not a party detective.’ Despite COVID-19, the party hasn’t stopped at some short-term downtown condo rentals
Up Next COVID was under control in Bali so they welcomed tourists, now cases are exploding | ABC News