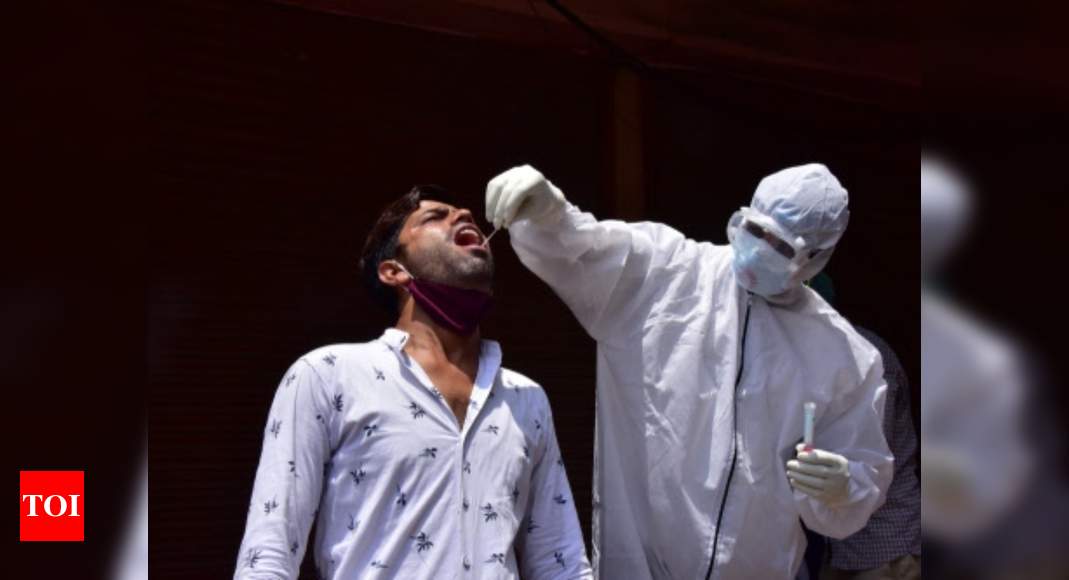 NEW DELHI: India recorded its lowest Covid-19 cases in 63 days and the lowest casualties in 77 days as the dip from the peak levels of the disease in September, which is being witnessed in the last few weeks, continued on Monday. Fresh cases on Monday at 53,082 are the lowest since August 10 when 51,296 infections were recorded. Fresh casualties at 696 are the lowest since July 27 when 638 deaths were recorded.
Though the figures on Mondays have been lower than other days of the week since the outbreak of the pandemic and the dip has been attributed by experts mainly to fewer testing on Sundays, data from covid19.org showed that nearly a million tests (9,94,851) were conducted across the country on this Sunday (October 11). This was marginally higher than 9,89,860 tests the previous Sunday (October 4), but far higher than the preceding two Sundays – 7,09,394 on September 27 and 7,31,534 on September 20.
Though most states showed a huge dip in fresh cases, the situation continued to be alarming in Karnataka, Kerala and Bengal which are yet to see a slowdown in the spread of the virus. Karnataka recorded 7,606 fresh cases which was higher than 7,089 cases registered by Maharashtra. This is the first time in many months that any state has recorded more cases in a day than Maharashtra.

Karnataka became the third state after Maharashtra and Tamil Nadu to cross 10,000 fatalities as 70 fresh deaths took the state’s toll to 10,036. Kerala’s fresh cases on Monday, 5,930, were lower than Sunday when the state recorded more than 9,000 cases, but the number was the third highest in the country after Karnataka and Maharashtra. Bengal broke the trend of scaling fresh peaks for six consecutive days on Monday but the fresh cases, at 3,583, were just marginally lower than 3,612 infections recorded on Sunday.
Maharashtra recorded 7,089 cases, after almost two months of registering a five-digit daily tally. The daily toll, too, fell to 165 after a fortnight of reporting 350 to 400 deaths every day. The number of Covid cases in Mumbai, too, dropped to 1,620 on Monday. State officials, however, said the “lower” tallies on Monday are most likely the result of fewer staff available to update the files.
More on Covid-19
Fresh cases in Tamil Nadu dropped below the 5,000 mark for the first time in 83 days when the state recorded 4,879 cases. In UP, after a gap of almost ten weeks the number of active infections went below the 40,000-mark.
Odisha recorded 2,423 fresh cases, which was the lowest since August 18.
Similarly, Andhra Pradesh recorded 3,224 new cases, which was the lowest single-day tally in the last 85 days.
India’s active cases continued to slide for the eleventh consecutive day, and went below the 8.5-lakh mark at 8,41,668. With Monday’s fresh cases, India’s caseload has reached 71,70,970 while 62,19,474 patients have recovered from the virus. The cumulative toll has reached 1,09,828.