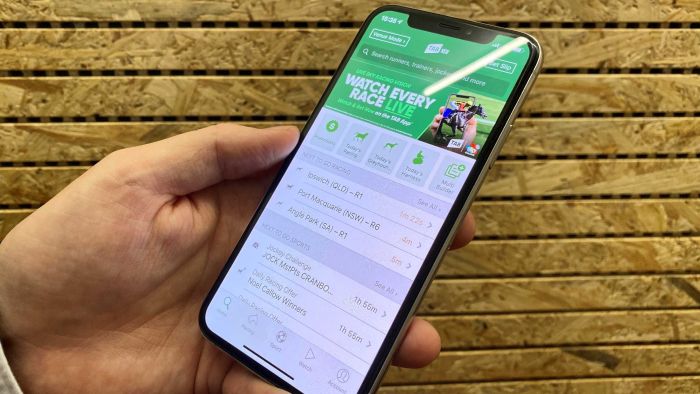 Online gamblers are blowing more money during the pandemic, with a new study revealing one in three signed up for new betting accounts in June and July.

Men aged 18 to 34 made up 79 per cent of new account holders, with the same group increasing their median monthly spend from $687 to $1,075, according to a study released by the Australian Gambling Research Centre (AGRC) today.

Venues face little scrutiny when it comes to turning problem gamblers away, ABC Investigations can reveal.

The centre, which surveyed more than 2,000 gamblers, said the number of participants who placed bets more than four times a week increased from 23 per cent to 34 per cent.

The racing industry, which commands close to 75 per cent of the local betting market, continued to operate while other sports were halted.

“They reported being heavily exposed to ads and promotions, and that was often a motivation for them to gamble,” she said.

Dr Jenkinson said among the total cohort surveyed, about 78 per cent now gambled online as opposed to 62 per cent before the pandemic.

“I don’t think we’ll see a decrease back to pre-COVID levels anytime soon,” she said.

“This is still a real time of uncertainty for a lot of people. A lot of people have lost jobs and some of the motivations for online gambling, particularly among young men in his sample, haven’t gone away.”

‘My finger automatically opens the app’

The ARGC’s research showed the median amount gambled actually dropped for men and women older than 34.

More than half of all gamblers surveyed said their physical and mental health had deteriorated during the pandemic.

While most betting was on recognised sport, there was a slight increase in money spent on “novelty” markets like the weather and reality television shows.

Several participants shared their stories of online gambling with the study’s authors:

“Whenever I am bored my finger automatically opens the app now … I knew my limits, now I can’t stop.” — Man aged 23

“I found that due to being so bored in isolation that my friends and I would put stupid bets on horses/dogs/overseas sport with little to no knowledge of the sport just to get a thrill out of it.” — Man aged 18

“Done appropriately it can be a fun activity. But it can be easy to become addicted.” — Man aged 25

Racing has remained a constant during the pandemic, even though punters have not been able to bet at the track.(AAP/Racing Photos: Reg Ryan)Profits soar for online bookies

The industry has also backed a federal national exclusion register, which would allow problem gamblers to effectively ban themselves from all Australian-licensed wagering services.

Responsible Wagering Australia, the peak body that represents bookmakers, has previously played down suggestions that an increase in online gambling reflected an increase in total gambling activity.

“With over-the-counter betting and gambling outlets closed by COVID restrictions, people have migrated to online platforms, as with nearly every retail business in the country,” chief executive Brent Jackson said in July.

Financial reports released by some of Australia’s most popular online betting companies show they have been raking it in during the pandemic.

Sportsbet’s parent company, Flutter Entertainment, reported that its Australian operating profits were close to $200 million in the six months to June 30, with online net revenue up 45 per cent in the first half of the year.