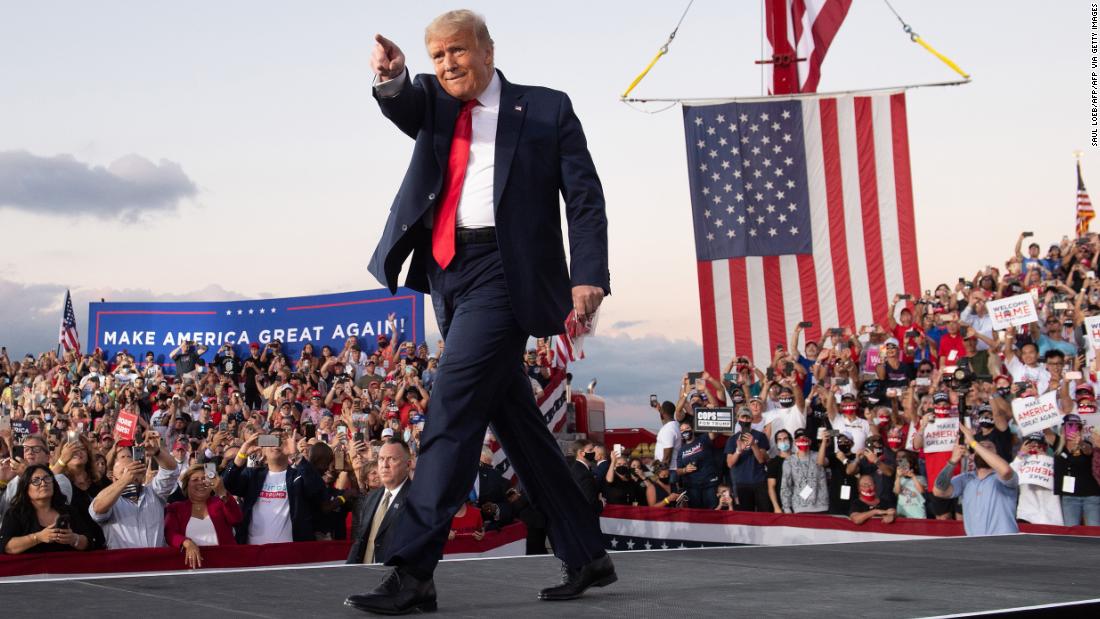 And instead of embracing new empathy for his fellow coronavirus sufferers, Trump touted experimental “cures” available only to him and emerged from the hospital declaring the virus is nothing to be afraid of without mentioning the more than 215,000 Americans who have died of it.

That this precise strategy has dragged him to historic polling woes, particularly among women and senior citizens, does not appear to be weighing on Trump as he commences a three-week sprint to Election Day, mainly through states he won four years ago.

Convinced he can recreate the against-all-odds formula that initially propelled him to office, people around Trump say he has taken few lessons from his illness aside from a reinforced view of his own invincibility, both political and medical.

“I talked to him last night,” Sen. Lindsey Graham, a South Carolina Republican, said on Tuesday. “He felt like he needs to get out on the campaign trail. I know Vice President Biden’s out campaigning. I think it’s good to be campaigning.”

Instead of recalibrating, aides say Trump has ascribed his current political fortunes to bad polling, even as he questions decisions made by his campaign on television spending and travel. With many senior White House officials still working from home due to a viral outbreak in the building, Trump remains surrounded by only a small group of aides who have mostly reinforced his approach, including chief of staff Mark Meadows and social media adviser Dan Scavino.

Where a different approach might have garnered sympathy, Trump’s refusal to change has opened him to fresh criticism from his opponents, including in a new Democratic ad openly suggesting his lax approach to the virus is what led to his own infection.

“He was warned, but ignored the evidence, holding rallies indoors, turning the White House into a super-spreader and contracting the virus himself,” a narrator says in the spot, which the Democratic National Committee said would air in battleground states and on cable in Washington — where it will surely catch Trump’s eye.

Republicans who once hoped for a more serious focus from Trump in the final stretch of the campaign — including on Judge Amy Coney Barrett’s nomination to the Supreme Court — are no longer looking to him for cues. Trump has found little support among Senate Republicans for the “big” new stimulus package he now wants after calling off talks last week. The Republican majority leader said last week he is avoiding the White House because of lax coronavirus protections.

Since returning from the hospital more than a week ago, Trump has held no official White House events except for an overtly political speech on the South Lawn over the weekend. He has spoken to a few foreign counterparts, including the British and Canadian prime ministers. His closely tracked arrivals to the West Wing have typically come later in the afternoon before his departure for the campaign trail.

Sen. Chuck Grassley, a Republican from Iowa and an ally of Trump’s, suggested on Twitter the President attempt some remedial last-minute message discipline.

“I suggest u use pocket card at podium w 5 short sentences on what u’ve accomplished 5 things that differentiate u from Biden 5 things u will accomplish in next 4 yrs,” he wrote on Tuesday. “Focusing on these simple highlights will help ur msg &only take 5mins.”

“Then say whatever u want,” he concluded.

Only that last piece of advice was in evidence as Trump reemerged on the campaign trail in Florida on Monday. Trump delivered what by now is a fairly familiar litany of falsehoods and exaggerations about his rival and the 2016 election, with scant mention of how he plans to govern if reelected.

As usual, he took aim at Biden’s mental acuity, an attack line that has gained little traction in the months Trump has been using it. Trump’s campaign sought to buttress the claims a day later, organizing a conference call with Trump’s former White House physician Dr. Ronny Jackson meant to raise questions about Biden’s fitness for office.

Jackson, who is running for a Texas congressional seat and also served in President Barack Obama’s White House, has befuddled former aides to Obama and Biden, who say his right-wing attacks and willingness to flatter Trump bear little resemblance to the amiable doctor they knew. After 10 minutes spent detailing what he claimed was Biden’s mental decline, Jackson was asked whether his appraisal amounted to a medical opinion on a subject he’d only examined on television.

“I’m not making a medical assessment,” Jackson said. “I actually don’t even practice medicine at this point.”

Trump’s freshest material Monday was about his own sickness, which he sought to use as evidence of his own stamina and not as a cautionary tale for ignoring public health guidelines. Though he tossed face masks into the crowd as he took the stage, few of his guests chose to wear them.

Trump’s decision to cast his illness as both inevitable and a “blessing from God” has disappointed some of his allies, who had once hoped he might use the events of last week to adopt newfound seriousness toward the pandemic. Instead he has taken the opposite route, saying he experience with the disease has only reinforced his impression that it shouldn’t cause undue interruption to people’s lives.

He has abandoned his begrudging efforts to convey esteem for Dr. Anthony Fauci, the top infectious disease specialist, whose respectability Trump’s campaign attempted to harness in television ads.

After Fauci expressed his own unvarnished annoyance at being used in the spots, Trump mocked his wayward first pitch at Washington’s Nationals Park earlier this year, writing on Twitter that his arm is “far more accurate than his prognostications.”

After months of on-and-off sniping, the enmity between the two men bursting open right before the election hardly seems opportune for Trump. Far more Americans say they trust Fauci on the pandemic than they do Trump; in cutting the campaign spot that featured Fauci praising the President’s handling of the virus, his campaign hoped some of that trustworthiness might rub off.

“I think it’s really unfortunate and really disappointing that they did that. It’s so clear that I’m not a political person. And I have never either, directly or indirectly, endorsed a political candidate,” Fauci told CNN’s Jake Tapper on “The Lead.”

“That would be outrageous, if they do that. In fact, that might actually come back to backfire on them,” he said. “That would be kind of playing a game that we don’t want to play.”

Don't Miss it Coronavirus Australia live news: No Australian is on a ventilator because of a COVID infection, says Health Minister
Up Next Coronavirus update: European countries scramble to stop second wave | DW News