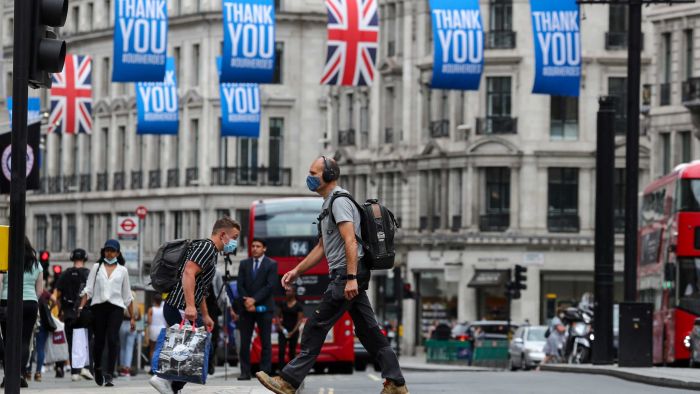 Millions of people will be banned from mixing indoors, with London due to be placed under tier 2 COVID-19 restrictions from this weekend.

Key points:London will be placed on tier 2 or “high” alert coronavirus restrictions from 12am on SaturdayPeople will not be allowed to mix indoors in any setting and discouraged from travellingThe UK recorded 19,724 new COVID-19 cases on Wednesday and 137 deaths

London will move from tier 1 to tier 2, or from “medium” to “high” alert, from 12:01am on Saturday under the new tiered system announced by Prime Minister Boris Johnson earlier this week.

Tier 2 means different households will be banned from mixing indoors, including inside homes, pubs and restaurants, and Londoners will also be told to avoid public transport and making non-essential travel.

Health Secretary Matt Hancock said the tighter restrictions were needed in London as coronavirus infections were doubling every 10 days.

“We must act to prevent more hospitalisations more deaths and more economic damage,” he said.

“To Londoners, and to all who work in our great capital, I want to say thank you for what you’ve done to supress the virus once.

“We now all need to play our part in getting the virus under control once again.”

Neighbouring county Essex will also be placed under tier 2 restrictions, as will Elmbridge in Surrey and several areas in England’s midlands and north.

London Mayor Sadiq Khan, who foreshadowed a tightening of restrictions in London earlier this week, said there was “simply no other option” as coronavirus infections were spreading “rapidly” in the capital.

“Nobody wants to see more restrictions but this is deemed to be necessary in order to protect Londoners,” he said.

“I must warn Londoners: We’ve got a difficult winter ahead.”

The new restrictions bring London into line with other parts of England already on tier 2 restrictions, while COVID-19 hotspots Manchester and Lancashire may be moved from tier 2 to the highest possible tier 3, or “very high” alert, which nearby city Liverpool is already under.

The “very high” alert level bans socialising, forces pubs and bars to close and prohibits travel outside the area under the restriction.

On Wednesday Mr Johnson resisted calls for a short “circuit breaker” national lockdown after it was revealed his Government’s own scientific advisers had advocated for one at the end of last month to halt the spread of the virus.

“The whole point is to seize this moment now to avoid the misery of another national lockdown,” Mr Johnson told Parliament.

Mr Johnson’s Government is facing another battle with its test and trace system.

Health Ministry statistics revealed the proportion of contacts of COVID-19 cases reached by the scheme had dropped down to a record low of 62.6 per cent, that was despite 216,627 people being identified as contacts of those cases, which was double the previous week’s amount.

The figure falls well short of the target of reaching 80 per cent of contacts and comes after an error delayed some tracing in the previous week.

Asked about the record low proportion of contacts reached, Health Minister Matt Hancock cited unprecedented numbers of people being contacted through the system, though that comes as prevalence of the disease rises.

“Of course we want to make sure that we get things even faster and we have an even greater testing capacity,” Mr Hancock told MPs.

Weekly statistics showed 87,918 people were transferred to the contact tracing system between October 1 and October 7, including around 11,000 cases delayed from an earlier reporting period by a technical problem.

Of those transferred, 76.8 per cent were reached and asked to give details of their contacts.