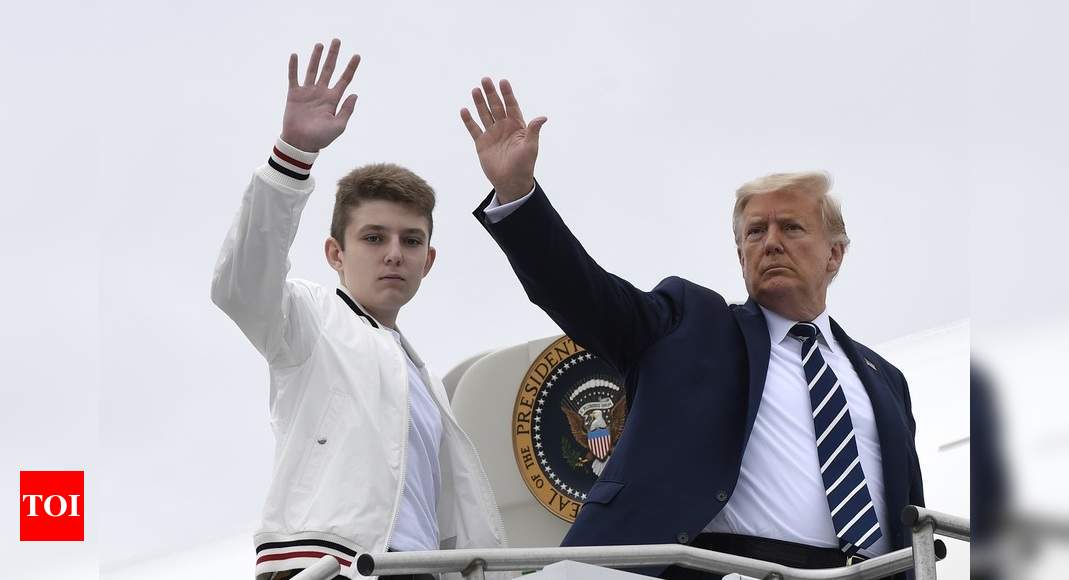 WASHINGTON: Donald Trump’s teenage son Barron contracted the coronavirus, First Lady Melania Trump revealed Wednesday in a shocking piece of news underlining how much the Republican president is struggling to divert attention away from the coronavirus pandemic in the final stages of his reelection fight.
Melania Trump wrote in a statement that after she and the president tested positive for Covid-19 two weeks ago, “Naturally my mind went immediately to our son.”
She said the 14-year-old, who goes to a private school near Washington, did not experience symptoms and has since tested negative.
However the news, which had been kept under wraps despite global attention on Trump’s own health, thrust public attention firmly back on the pandemic and in particular on an outbreak within the supposedly highly secure White House over the last two weeks.
Trump, who spent three nights in hospital but returned to a punishing schedule of pre-election rallies on Monday, has been trying to move voters away from the subject in the closing 20 days of his campaign against Democratic frontrunner Joe Biden.
“Barron’s fine,” Trump told reporters at the White House as he left for another rally in Iowa, abruptly switching to his preferred subject of the expected confirmation by Senate Republicans of his conservative nominee for the Supreme Court, Amy Coney Barrett.
On Thursday, Trump and Biden will duel in an unusual manner when they hold separate but simultaneous town hall events on major TV networks.
The competing primetime appearances were organized after a head-to-head debate between Trump and Biden due to be held Thursday was scrapped in the aftermath of Trump’s Covid-19 diagnosis.
Trump negotiated to go on NBC at an outdoor setting in Miami after Biden had arranged his own event on ABC in Philadelphia.
In the past, Trump has appeared uncomfortable in town hall settings where ordinary voters ask questions. But as a former reality TV show star and a keen follower of viewing figures, the president will at least be keen to attract a bigger audience than Biden.
The two were meant to have met on stage for their second debate on Thursday in a town hall format where the two candidates would have fielded questions from voters.
However, in an unprecedented decision, debate organizers said they wanted to switch to a virtual format for safety reasons after Trump contracted the coronavirus. When he rejected the new conditions, the debate was called off.
NBC said it had received a statement from the clinical director at the National Institutes of Health, Anthony Fauci, that there was “a high degree of confidence” that Trump is now “not shedding infectious virus.”
Trump and the NBC host will be socially distanced at the outdoor venue and the audience will wear masks, NBC added.
Biden has been frequently testing for coronavirus and reporting negative results since Trump’s Covid-19 diagnosis on October 1.
The first of three scheduled presidential debates was widely criticized for descending into an angry shouting match as Trump attempted to inflict a late wound to Biden’s campaign.
At a rally in Pennsylvania on Tuesday, Trump accused Biden of “choking like a dog” during the debate, and unleashed a tirade of lurid insults at his challenger, calling him mentally “shot.”
“He can’t stand up to the lunatics running his party,” Trump told the large, raucous crowd in Johnstown.
Furthering his long-running narrative that 77-year-old Biden is too frail for the presidency, Trump, 74, tweeted a crudely faked picture purporting to show Biden in a wheelchair.
The attack came as Biden stepped up his own courting of the important elderly vote, telling an event at a retirement center in Florida on Tuesday that Trump has “never been focused on you.”
“His handling of this pandemic has been erratic, just like his presidency has been,” he said.
The coronavirus has claimed more than 215,000 lives in America and Trump’s handling of the crisis meets with disapproval from more than two-thirds of people polled.
A RealClearPolitics average of national polls has Biden up by 9.8 points, with the Democrat leading Trump by substantial margins in half a dozen key battleground states.

Don't Miss it My parents died from COVID-19. They died without a will — but wrote in emails that they wanted me to inherit their home
Up Next Melania Trump says son Barron previously tested positive for coronavirus