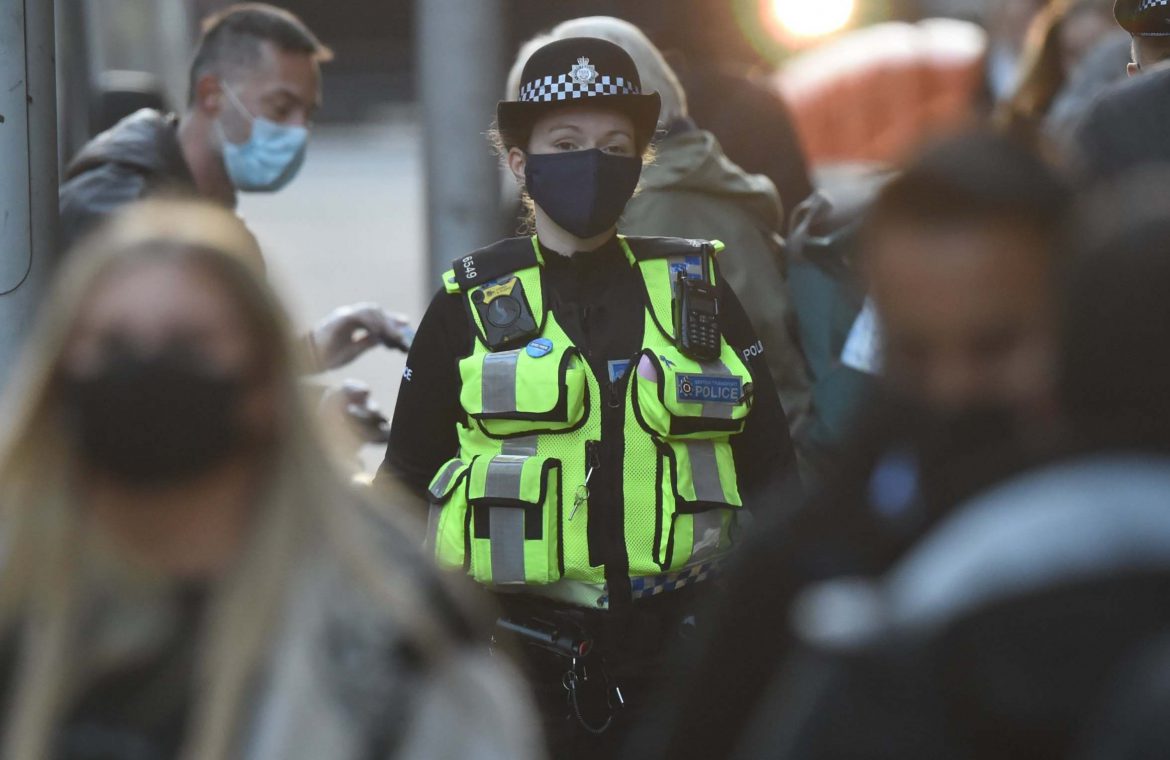 Londoners are to see tough new coronavirus measures imposed from one minute past midnight on Saturday as the city enters Tier 2 of the Government’s Covid alert system.

The move means that the city’s nine million residents will be banned from mixing with other households indoors, including in pubs and restaurants.

Health Secretary Matt Hancock announced the new measures to MPs in the House of Commons this morning, as he warned that Covid-19 “is now spreading exponentially in the UK”.

Essex, Elmbridge, Barrow in Furness, York, North East Derbyshire, Chesterfield and Erewash will join the capital in being placed under “high risk” alert, while a decision has yet to be made on swathes of the north of England, Yorkshire and the Midlands which were set to be placed in the “very high risk” Tier 3.

Half the population of England will now be in either Tier 2 or 3 of the alert system, following the announcement. Liverpool City Region, comprising 1.6 million people, remains the only area currently classed in the top category. A further 26.7 million people will now be covered by Tier 2 restrictions.

Rates for new Covid-19 cases in England remain highest in the 10-19 and 20-29 age groups, according to the latest weekly surveillance report from Public Health England.

The Greater Manchester mayor told a press briefing: “I’ve said it may be that we need to look at a national circuit-break as preferable to this unfunded, risky regional lockdown strategy.

“We have to protect the health of the nation but let’s do it as one nation, and not make the North of England the sacrificial lamb for an ill-thought-through Downing Street policy which doesn’t make sense in the real world.”

“We aren’t going to be pushed around any more.”

He argued it would “cost less to support people now rather than let businesses go to the wall” and damage the speed of the post-Covid economic recovery.

Sir Richard Leese, leader of Manchester City Council, says the Government is asking the authority to sign up to measures that its own advisers were not convinced would work

Speaking at a press briefing in the city, he said: “What we were told last night by the deputy chief medical officer – and I will go a bit further than Andy (Burnham) – was that what we’re asked to do is accept a proposal which the Government’s own advisers say won’t work.

“Why would we accept a proposal that their own advisers say won’t work?”

Sir Richard said the region is “still in a position where we are prepared to work co-operatively with Government”.

He added: “But we are not going to accept a deal that will damage thousands of people in this city region for no apparent benefit.”

“It’s so tough,” he said. “When you’ve built up a business over years – whatever it may be, a pub or a restaurant – you are of course going to feel the impact of this.

“And all I can say to all the people in that category is the fact we honestly believe this is the best way of avoiding a much more severe outcome in Tier 3.

“Secondly, we honestly believe that by doing this now we can avoid being in Tier 2 for a much longer period later.”

He said: “Today we communicated our clear and unanimous view to the Government. It is wrong to place some of the poorest parts of England in a punishing lockdown without proper support for the people and businesses affected.

“To do so will result in certain hardship, job losses, business failure.

“It will cause harm in a different way to people’s mental health and is not certain to control the virus.

“Last night the deputy chief medical officer told the leaders that to bring the infection rates down any regional lockdown would require widespread closures way beyond pubs to stand any real chance of working.”

A spokesman said: “While our numbers are still high and we are not complacent, this is a drop from the previous seven days and a similar trend is being seen at other universities.”

Neighbouring Northumbria University recorded a large drop in positive cases in the week to Wednesday, down to 131 students from 619 the previous week.

It said two members of staff had reported positive tests in the past week.

A spokesman said: “We are making extensive efforts to both reduce the growth in the numbers of cases and to provide support for our students and staff who are self-isolating.”

The European Commission President tweeted: “I have just been informed that a member of my front office has tested positive to Covid-19 this morning.”

Latest coronavirus death toll figures for England hospitals are in:

A further 81 people who tested positive for coronavirus have died in hospital in England, bringing the total number of confirmed deaths reported in hospitals to 30,743, NHS England said on Thursday.

Patients were aged between 40 and 99. All but three patients, aged between 67 and 86, had known underlying health conditions.

The deaths were between August 17 and October 14, with the majority on or after October 9. Three other deaths were reported with no positive Covid-19 test result.

Colin Smith, who leads the south-east London local authority, said it was “not fair in any way” for all of the capital’s boroughs to be “clumped together in a one-size-fits-all arrangement”.

Speaking about the Tier 2 restrictions for the city, he said: “What this decision singularly fails to recognise or reflect is that large tracts of Bromley feature as open farm and woodlands hosting medium size villages, with far more in common with Kent than they have with other ‘London’ boroughs.

“I fully accept that no-one is immune to this awful pandemic and that it is possible that we could be tipped into joining others within days if the infection levels dictate.

“I would be the very first to support doing so if the empiric evidence proves the need, but today’s decision is premature and makes a complete mockery of the so-called ‘localism’ agenda.”

The Metropolitan Police’s probe into MP Margaret Ferrier’s breach of coronavirus regulations has been dropped on a technicality, it emerged on Thursday.

The member for Rutherglen and Hamilton West had previously referred herself to Police Scotland after she admitted travelling by train from London to Scotland despite receiving a positive coronavirus test.

The politician travelled from London to Scotland after testing positive for coronavirus.

Scotland Yard said Ms Ferrier will not face any further police action because the regulations on self-isolation came into force after she was tested.

The 94-year-old monarch was joined by her grandson the Duke of Cambridge at the Defence Science and Technology Laboratory (Dstl) at Porton Down near Salisbury, meeting scientists providing vital support in the UK’s response to the Covid-19 outbreak.

She ventured from HMS Bubble – the nickname for her reduced household of staff – for what was her first external engagement in seven months.

The Queen was on good form as she quipped while signing the guest book: “Well it proves we’ve been here, doesn’t it?”

There was also the traditional royal duty – the unveiling of a plaque to officially open the Dstl’s new £30 million Energetics Analysis Centre, used by scientists for counter-terrorist work.

Neither the monarch nor William was wearing a face covering.

But all 48 people who were due to come into close contact with them were very recently tested for Covid-19 by Dstl beforehand, and all came back negative, and social distancing was carried out during the visit.

In a letter written to Mark Drakeford asking for clarification about the restrictions, Mr Hart also expressed his concern over the First Minister’s comments that Welsh residents “would be on the lookout” for visitors breaching them.

Mr Hart wrote: “I remain worried that, without rapid explanation, this approach risks stirring division and confusion in Wales. We both know that, in reality, communities in Wales are as hard-hit by Covid-19 as English, Scottish and Northern Irish communities.

“Your recent comment about residents in West Wales being ‘on the lookout for people who shouldn’t be in those areas’ is an example of exactly the situation we should be trying to avoid.”

Mr Hart also asked for a number of clarifications, including how the decision was made to restrict travel, legal guidance on how it is lawful, how enforcement will be managed, and whether university students would be allowed to travel home.

Rashford hits out at Government over Christmas meals for kids

Marcus Rashford MBE has hit back at Downing Street after it indicated ministers would not provide free school meals to children during the Christmas holiday.

“It’s also not for food banks to feed millions of British children but here we are. 250% increase in food poverty and rising…

“This is not going away anytime soon and neither am I…”

His comments came after a No 10 spokesman said: “It’s not for schools to regularly provide food to pupils during the school holidays.”

Meanwhile Sadiq Khan has tweeted a message to Londoners:

Matt Hancock has just tweeted a video of himself stressing the importance of taking action:

There have been a further 727 cases of Covid-19 diagnosed in Wales, bringing the total number of confirmed cases in the country to 33,041.

Public Health Wales said 10 further deaths had been reported, with the total number of deaths since the beginning of the pandemic rising to 1,698.

Northern Ireland update: Cases up by 763 as death toll rises by four

There have been 763 new Covid-19 cases in Northern Ireland in the last 24-hours, the country’s Department of Health has announced.

Another four fatalities were reported from the virus, taking the death toll to 606.

There are 201 patients with Covid-19 being treated in hospital, with 24 in intensive care.

This graph tracks the rising rate of hospital admissions across England since April: