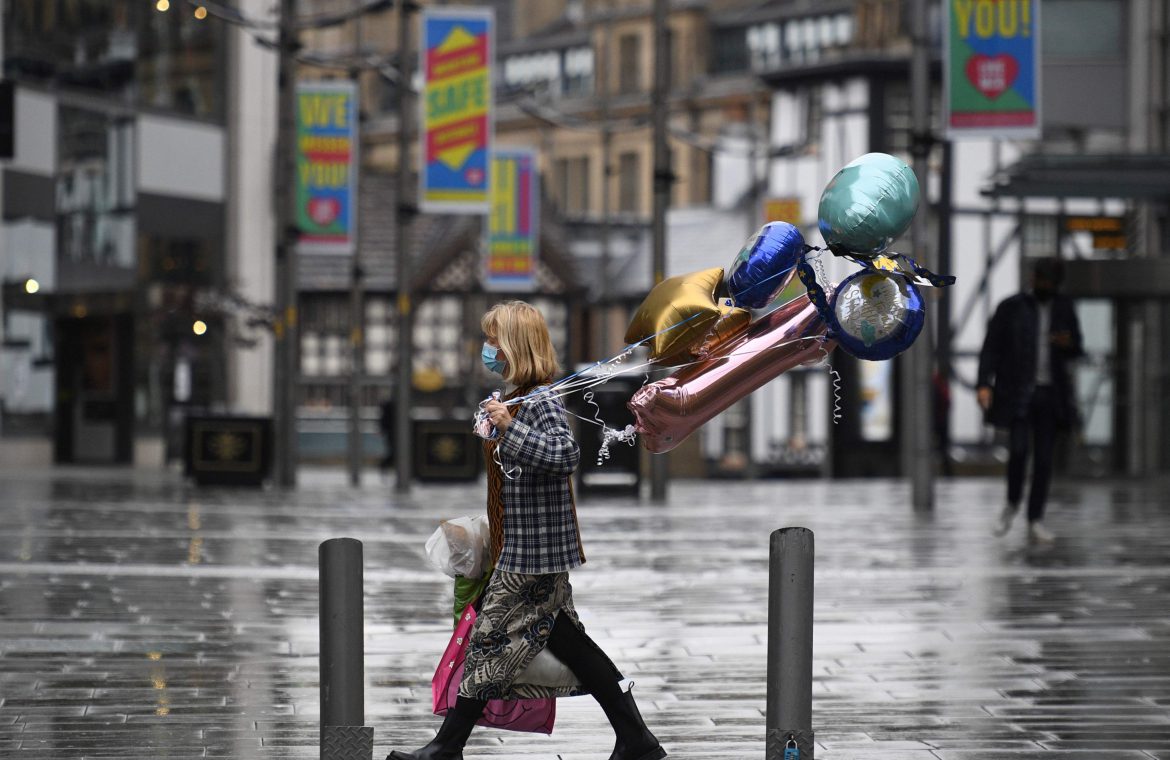 A shopper wears a facemask as she walks along a near-deserted street in Manchester, north west England

Boris Johnson warned he will “intervene” to impose tier 3 restrictions on Greater Manchester as he again rejected calls for a national lockdown.

The prime minister said the government would step in if local leaders refused to agree to tougher measures which would see pubs, bars and casinos shut down and a ban on household mixing.

It came after Lancashire agreed to move into the highest level of the new coronavirus lockdown system in return for £42m in financial support for businesses, the care sector and schools. Gyms and leisure centres will be allowed to stay open, unlike in Merseyside.

Meanwhile London mayor Sadiq Khan warned that the capital could be held under tier 2 restrictions “for months and months and months” if Boris Johnson did not agree to a time-limited, nationwide “circuit-break”.

Couples that live apart in tier two or three areas are not allowed to have sleepovers or meet indoors unless they are in a “support bubble,” Downing Street has confirmed.

The new rule, which bans couples living apart from having sex, was reintroduced as London prepares to enter tier two coronavirus restrictions at midnight and will apply to anyone living in areas that fall under tier two or tier three shutdowns.

Commons leader Jacob Rees-Mogg is facing increasing pressure to allow digital voting by MPs as tougher restrictions are imposed across the UK.

Senior Tory Sir Bernard Jenkin, the chair of the powerful Commons liaison committee, said other select committee chairs had asked him to press for a resumption of the virtual parliament.

He wrote: “As more areas come under greater restrictions to control the spread of Covid-19, it will become increasingly difficult for the public to understand why members are still required to travel to and from London in order to represent them.

“Hybrid proceedings have their own limitations, but they have been shown to work and to allow members from across the UK to participate without risking further spread of the virus.”

Mr Rees-Mogg insisted in a Commons debate on Thursday that the Palace of Westminster has been made “Covid-safe”.

Nottingham University Hospital has told surgeons to cancel most non-urgent routine operations at its hospitals with immediate effect after “rapidly escalating demands” caused by coronavirus.

The East Midlands hospital had warned it may have to cancel surgeries earlier this week after it reported experiencing 100 admissions a day in its accident and emergency department.

The US Centers for Disease Control and Prevention (CDC) on Friday reported a further 892 deaths, bringing the total to 216,917.

Experts call for ban on visits to Northern Ireland

Northern Ireland should restrict the movement of travellers from other coronavirus hotspots in Great Britain in a bid to halt the country’s rate of transmission, health experts have said.

The nation has one of the highest seven-day rates in Europe, with 334 cases per 100,000 people, according to the latest government data.

Drug used by Trump has ‘little or no effect’

Remdesivir has “little or no effect” on the mortality rates of patients with coronavirus in hospital, a clinical trial by the World Health Organisation (WHO) has suggested, describing the drug as “disappointingly unpromising”.

The antiviral drug is one of four that was considered in the WHO’s Solidarity trial that began in March, looking to repurpose treatments that could be used to tackle coronavirus symptoms.

The French health ministry reported 25,086 new confirmed coronavirus cases in past 24 hours on Friday, after reporting a record 30,621 on Thursday.

A further 122 people have died from Covid-19 in hospital, compared to 88 on Thursday.

Including deaths in retirement homes – which are often reported in multi-day batches – the death toll increased by 178 on Friday.

Nicola Sturgeon has urged football fans to stay at home this weekend ahead of the first Celtic vs Rangers clash of the season.

The Glasgow clubs will play behind closed doors at Celtic Park on Saturday due to Covid-19 restrictions.

The government has introduced legal changes that permit more health workers to administer vaccines once they are clinically approved.

The amendments to the Human Medicine Regulations 2012 come into effect on Friday, meaning that experienced workers such as independent nurses, pharmacists and physiotherapists will be able to give vaccinations after undergoing training.

A consultant in intensive care for the Aneurin Bevan University Health Board, which covers Newport in southeast Wales, has warned that “radical action” is needed.

He said: “We now have 9 patients with covid on ICU in ABHUB. Age range is 20s-70s. All previously fit and able to walk good distances. Majority in work.

“It’s October. We have months of this to come. We need radical action to get a lid on this else we will be hit worse than wave 1.”

Don't Miss it The Federal Government plans to have a COVID-19 vaccine ready by early next year | ABC News
Up Next Which countries are doing well with contact tracing for coronavirus? A look at South Korea, Singapore, China, New Zealand and Belgium