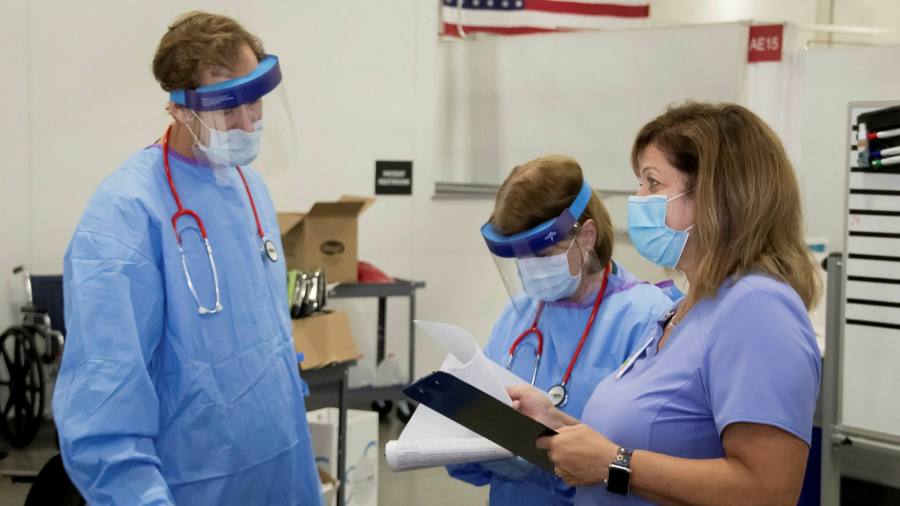 Several of the most fiercely contested states in the US presidential election showed sharp increases in coronavirus cases on Thursday, pushing the number of infections nationwide to their highest levels since a summer outbreak.

Wisconsin, Ohio and North Carolina — which Donald Trump won four years ago but where statewide polling shows Democratic challenger Joe Biden either even or leading — recorded record jumps in cases, according to local health departments.

In addition, Arizona and Florida, which are also viewed as “swing states” that Mr Biden could win after they went for Mr Trump in 2016, saw big jumps in infections on Thursday. Arizona reported more than 1,000 new infections for the first time in a month, while Florida saw 3,573 new cases, its second-highest total in the past month.

Nationwide, the US tallied 63,172 new cases on Thursday, the largest one-day jump since late July, according to data compiled by the Covid Tracking Project. There were 951 Covid-related deaths over the same period.

The sharp rise less than three weeks before election day will only reinforce the pandemic as the central issue of the campaign in its home stretch. Mr Biden has frequently seen his polling numbers increase in states where infections are on the rise, and the Trump campaign has worked to shift the national debate away from the president’s handling of the pandemic.

Mr Trump travelled to the city of Greenville in North Carolina on Thursday for a campaign rally, underlining the state’s importance to the president’s narrowing path to re-election.

Kamala Harris, Mr Biden’s vice-presidential nominee, was to travel to Ashville and Charlotte in North Carolina before being grounded after two members of her travelling party were diagnosed with the virus.

At the North Carolina rally, Mr Trump ignored the sharp rise in cases, claiming that the pandemic was in fact on the wane. “It’s ending,” Mr Trump told a crowd at the regional airport. “They go crazy when I say it. It’s going to peter out and it’s going to end.”

North Carolina’s health department reported 2,532 positive tests over the past 24 hours, almost double the 1,267 recorded on Wednesday. That surpassed the previous record of 2,486 new infections reported on July 18, during the US outbreak’s summer peak.

“We are reporting our highest day of cases since the pandemic began,” Mandy Cohen, North Carolina’s health secretary, said at a briefing after being informed of Mr Trump’s comments. “It doesn’t feel like it is petering out to me.”

In Wisconsin, 3,747 people tested positive over the past 24 hours, up from 3,107 on Wednesday. That was significantly higher than the previous one-day record of 3,279 reported on October 13, according to data provided by the state.

The new surge in US coronavirus cases comes as Europe battles a similar outbreak, which many experts believe is a preview of a difficult winter for the northern hemisphere, as people are forced inside due to inclement weather during the height of cold and flu season.

Matt Hancock, Britain’s health secretary, announced on Thursday that London would be placed on “high” alert status, barring residents from socialising outside their immediate families.

Manchester in the north of England has resisted the government’s efforts to impose even more onerous restrictions a day after Liverpool agreed to “tier three” measures, which includes the shuttering of all bars and pubs.

Paris and eight other French cities are to be put on strict overnight curfews by President Emmanuel Macron at the weekend following a similar outbreak in France.

Trump vs Biden: who is leading the 2020 election polls?