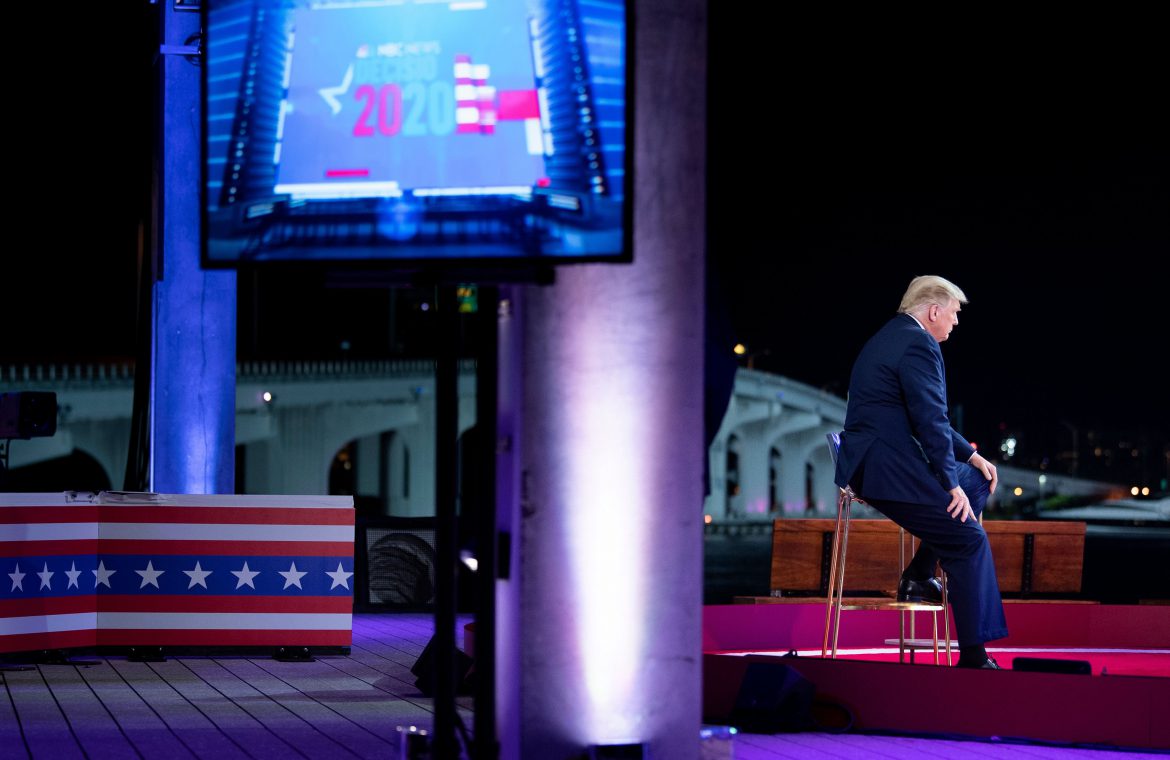 Donald Trump delivered a combative town hall performance as he jousted with the NBC News moderator over his $400m in debts, his long-held reluctance to denounce white supremacy after revealing his medical team told him his lungs were “infected” during his coronavirus bout – but he stopped short of saying he had pneumonia.

The president did little to appeal to undecided and moderate voters during the Thursday night event in Miami, promising a vague replacement to the 2011 Affordable Care Act known as Obamacare and sticking by his handling of the Covid-19 pandemic. He risked further alienating women and senior voters as he clashed with NBC’s Savannah Guthrie, yelling over her and snapping his rebuttals over and over during the 60-minute event. Meantime, his Democratic challenger, former Vice President Joe Biden, used his own town hall  in Philadelphia to take a hard step toward those very voting blocs by distancing himself from a 1990s crime bill he authored, but which led to long prison stays for minor drug abuses – a law that hit the Black community especially hard.

“I don’t believe anyone should be going to drug courts for drug use,” the Democratic presidential nominee said during his event, which aired opposite Trump’s on ABC. He also distanced himself from the “defund the police” movement: “We shouldn’t be defunding police officers.”

Back in South Florida, the president was being more open about his Covid-19 experience, without painting himself as being seriously ill to the point he considered handing power to Vice President Mike Pence.

“Lungs were a little bit different, perhaps infected,” he said as Guthrie asked with what.

“I didn’t do too much asking,” Mr Trump said, noting he had a fever while infected. “I didn’t have too much problem with the lungs. … Felt there was a little something missing.”

Mr Trump claimed to not know if he took a Covid-19 test on the day of his first debate with Democratic presidential nominee Joe Biden.

The president yelled over Ms Guthrie and was aggressively defensive as she asked the first series of questions, telling her at one point she was “so cute” for pressing him about coronavirus and his years-long resistance to denounce white supremacy.

The NBC anchor told him it matters that he has a habit of retweeting posts from racist groups, telling him “you aren’t someone’s crazy uncle.”

Mr Trump claimed to have denounced pro-white racist groups for years, contending the media has distorted his words. But when asked to do so several times recently, he and top aides have not done so while using the words “white supremacists.”

On coronavirus, she asked about wearing face-coverings, contending he has been dismissive of that while top health experts have recommended it.

He correctly said Anthony Fauci, the top infectious disease official in Washington, “changed his mind” and is pushing hard that every American do so.

“Wear the mask. I have no problem with it,” the president said. “We’re on the same side.”

The GOP president blamed Speaker Nancy Pelosi for a long-stalled new Covid-19 relief bill, saying, “Nancy is in our way.”

“She doesn’t want to give the money,” he said – even though Senate Republicans want a small bill. The president contends he will get the Senate Republican votes needed to pass a “bold” measure.

“They’ll go,” he said. “I haven’t asked them because I can’t get past Nancy Pelosi.”

That comes as another dismal job reports amid a third spike in coronavirus cases – and fears of new economic shutdowns in some regions to stop the spread.

The president has said he is not interested in new lockdowns, which Mr Biden says he would order should cases and deaths again dramatically climb.

Mr Trump and Ms Guthrie put on quite the combative performance in what she aptly called “hot Miami.” That included his alleged $400m in debts to unknown creditors.

“No, I don’t owe Russia money. It’s called mortgages. I will let you know who I owe, whatever small amount it is,” he said, adding of debts laid out in a recent New York Times report: “It’s very very straight. Tiny percentage of the [net] worth. I am extremely underleveraged.”

The president, yet again, vowed to release his tax returns – but, as always, only when the results of an alleged IRS audit come in. The agency, citing privacy laws and guidelines given to all Americans, has declined to confirm the president is under audit.

Mr Trump appeared on his NBC News town hall in Miami while his Democratic challenger heard from voters in Philadelphia.

The duo held the competing made-for-television events after their second planned debate fell apart. But both chose to hold solo town halls in swing states they have given ample attention as Mr Biden leads in both: Florida by around 4 points and Pennsylvania by around 7.

Mr Trump won both in 2016, and admitted at a Wednesday rally in Iowa he is concerned by current polls that put him behind in key states. One veteran political analyst says the president has plenty of reason to worry.

Given his approval rating hanging around 40 per cent his entire term, “there was little reason to see him as a favourite,” according to Charlie Cook of the Cook Political Report. “Given those numbers, Trump was already on thin ice heading into the coronavirus pandemic.”

“After three months of belittling the severity and lethality of the outbreak and touting dubious remedies, the ice under his feet got still thinner. With his debate performance, it gave way and down he went,” he added. “Swing voters, in particular, have been gradually turning down the volume on the president. After the [first presidential] debate, they finally hit mute and stopped listening entirely.”

As he continues a battleground blitz, the president touched down first on Thursday in North Carolina – which he also won in 2016 but polls suggests is a dead heat this time – for a rally in Greenville during which he attacked Biden and his son Hunter as profiting off the father’s time as VP while average Americans got “robbed” by other countries.

Mr Trump, always aggrieved and using that to appeal to a rather aggressive conservative base, griped about a town hall he agreed to.

“So I’m doing it and it’s NBC, the worst. Home of ‘Sleepy Eyes’ Chuck Todd and some others. And they gave Lester Holt, he’s a beauty, they gave Joe Biden a week ago a townhall and it was meant for children,” he said of his rival’s recent time on the network answering voters’ questions.

He then, once again, attacked Mr Biden’s age – even though, at 77, he is only three years the president’s senior.

“And so they asked me if I’d do it and I figured, what the hell, we get a free hour on television. And we have Savannah Guthrie, she’s always lovely, isn’t she? But I figure why not? What’s the difference in tone between what they did to this guy that can’t put two sentences together and what they do to me,” he said.

Don't Miss it India overtakes Brazil in number of coronavirus cases | The World
Up Next COVID-19 exposure warnings issued for car dealerships in Surrey, Langley