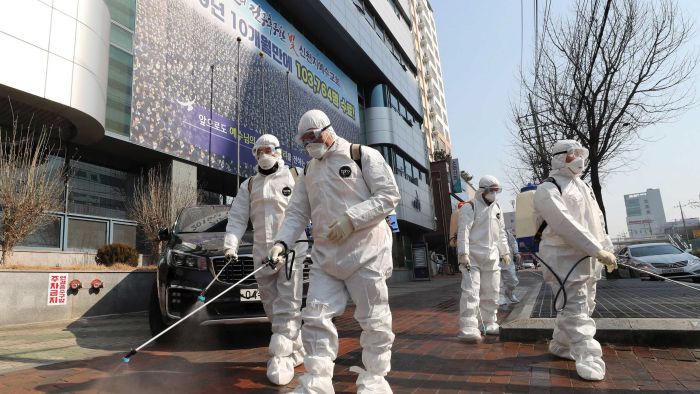 Victoria’s contact tracing system has been under scrutiny in recent weeks, while New South Wales has been held up as a gold standard.

But how does Australia measure up on a global scale?

According to one expert, we still have a way to go.

Professor Tony Blakely, from the Melbourne School Of Population And Global Health, says Australia is still in the process of scaling up its contact tracing capacity.

We’re well ahead of the UK, where Professor Blakely says contact tracers have been swamped by cases.

But Australia is not yet up to speed with some East Asian countries, where infrastructure is more advanced, largely because of previous infectious diseases outbreaks like SARS and swine flu.

“There are workforces trained in this, but we just haven’t had the same scale or well-oiled machinery as East Asia had, because we haven’t been forced to by SARS,” Professor Blakely said.

Contact tracing is the process of gathering information about the people a known case of COVID-19 might have been in contact with, and the places they have been.

It’s critical to limiting the spread of coronavirus, according to the World Health Organization.

From the use of facial recognition to credit card statements, rapid cooperation and massive testing efforts, here is a look at how some countries tackle contact tracing.

Catch up on the main COVID-19 news from October 16 with our coronavirus blog.SARS experience helped South Korea’s leap into action

South Korea has just under 25,000 confirmed COVID-19 cases, about 2,000 fewer than Australia, with about double the national population.

These numbers are even more impressive because it was one of the first countries outside China to experience a surge in coronavirus cases.

Professor Blakely says South Korea learned a lot from its brush with the SARS pandemic.

“What we know that’s good about South Korea is that they had the previous experience of SARS and what they learned from that is population behaviours, people know how to physical distance, they know how to wear masks.

“It’s basically a very good workforce in place to do contact tracing.

“Contact tracing has the manual part to it, but it’s enhanced by facial recognition through CCTV, though that may not work so well through masks these days. They have apps that work reasonably well, they have technology that works better than our apps.”

South Korea also traces people via credit card transactions, but Professor Blakely says “that’s probably something you won’t get away with in Australia”.

And CCTV and mobile phone data is used to retrospectively track the movements of people who have tested positive.

The routes taken by people confirmed as infected are often published online, while an alert — similar to a bushfire or flood alert we might receive in Australia — is pushed to the phones of people who visited the same locations.

“In Singapore they do take people into quarantine centres, so they don’t necessarily stay in their home,” she said.

“The most important thing is getting that rapid cooperation, a good system but also a good relationship with the population around those expectations.”

She says the cultural differences between East Asian nations and Australia play a huge part in the efficiency of contact tracing regimes.

“There’s a cultural element to it, and an efficiency.”

Singapore has recorded more than 57,800 COVID-19 cases and has a population of about 5.6 million.

The country was an early developer of the TraceTogether mobile app, which exchanges information with contacts close by using a device’s Bluetooth.

In Singapore about 2.4 million people reportedly downloaded the app and about 1.4 million used it in August out of a population of roughly 5.6 million.

More than 7 million Australians have downloaded COVIDSafe, from a population of 25 million.

China boasts staggering infrastructure to nip cases in the bud Despite being ground zero for coronavirus, China says it’s now largely on top of its outbreak.(ABC News: Steve Wang)

In the original epicentre of the novel coronavirus, China has gone through major lockdowns in its battle with COVID-19.

Professor Bennett says China is able to respond at a level unmatched by other nations.

“I notice with the recent cases in [the Chinese city of Qingdao], they’re looking to test millions of people in a few days. It is something about the machinery behind you, that level of infrastructure to even imagine something like that let alone to carry it out.

“No matter how efficient you are, you’re going to have long queues to get millions tested.

“That’s the level of response they’re investing in because as expensive as it is, if you can get everybody out of their home to line up and test and isolate until they have results then they can nip something in the bud.

“They know how quickly it takes off and they know that nipping it in the bud is the way to do it. Not every country could afford to do it or successfully do it.”

Under the Ministry of Information Industry Technology, China developed a national data analysis platform in which telecom carriers provide tracking records of their customers for the previous 15 days.

As well as this, various apps were introduced in different regions of China, where residents are given different statuses (red, yellow or green) which result in different levels of restrictions.

But New Zealand doesn’t have the same massive cultural difference with AustraliaSpace to play or pause, M to mute, left and right arrows to seek, up and down arrows for volume.WatchDuration: 4 minutes 7 seconds4m 7s Brett Sutton says Victoria is going “above and beyond” contact tracing requirements.

Australia’s neighbour New Zealand famously pursued an elimination strategy to rid the country of COVID-19 entirely, and announced it had successfully done so at the end of its first wave.

When new cases emerged in Auckland, they went in “a very targeted way”, said Professor Bennett.

She said New Zealand was able to focus on areas they needed to close down and apply necessary restrictions.

But New Zealand’s success can’t be attributed to cultural differences the way east Asian nations can.

So how did the Kiwis get it right?

“They could have been looking across the ditch to Melbourne and seeing what happens if you don’t get it early,” Professor Bennett said.

“They understood that. I think they did feel they had a good outcome the first time, and when they went into it a second time it was more nuanced, and they had that buy-in.

“They had that belief that it was necessary, a belief that was less tainted by the misinformation out there, and understood the threat. They trusted the system in place.

“In Melbourne we had the reverse. We went in fast and got it right the first time. Maybe that was even harder than we needed, but it was enough.

“The second time we tried it again, but we didn’t have the buy-in in the same way. We had some fatigue, and then when we tried to ramp it up to something even tougher than the first wave, it got even harder.”

Are there relative success stories from other Western nations?

Professor Bennett says Belgium is one country that did a lot of work to find more cases, and even find more deaths, to report its outbreaks in a certain way.

“While they ended up with a higher number, that was because they were incredibly thorough in the way that they did it and tried to contain things,” she said.

Healthcare workers, nurses and doctors in Belgium protested the Government’s handling of the pandemic in May.(Reuters: Yves Herman)

She believes the one thing missing from Australia’s arsenal in comparison to other nations is effective contact tracing technology.

“I think there’s got to be a way you can get the happy balance between not revealing private information but having a technology that allows you to be able to move around more freely, not necessarily registering at every restaurant but have ways that you’re pinging off other people.”