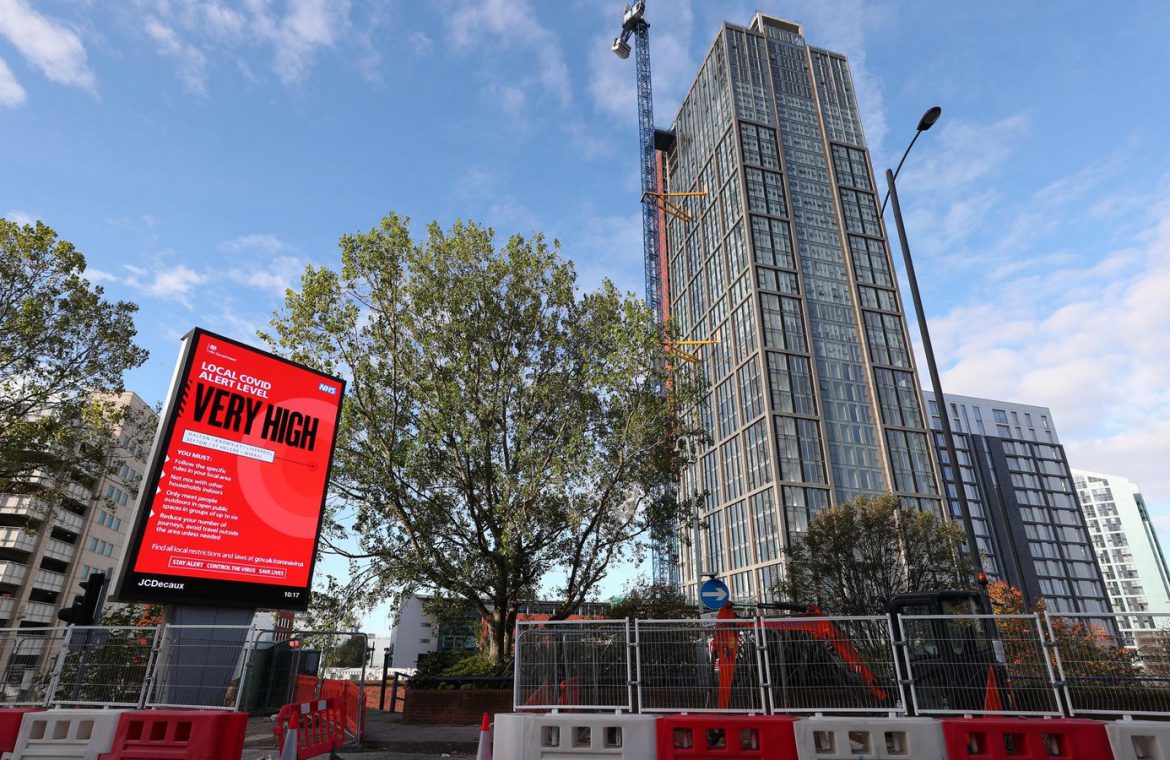 The North has become the epicentre of England’s second wave of coronavirus, with the toughest restrictions imposed in some areas.

Sky News political editor Beth Rigby has spent this week touring the towns and cities in the North where tiered lockdowns have shattered normal life for millions of people.

Walk into the centre of Bradford and the impact of COVID-19 on this city in West Yorkshire is plain to see.

In the shadow of the imposing Venetian-style city hall in Centenary Square is a giant makeshift coronavirus testing centre.

It has been there for four months and the 536,000 people who live here in Bradford have been living in lockdown for three months.

This was one of 20 cities and towns across Greater Manchester, East Lancashire and parts of West Yorkshire where people have been banned from meeting each other indoors since the end of July.

The summer here was hard and the winter is about to get worse.

I was in Bradford on Monday, the day the government announced its three-tier COVID alert system.

For this city nothing much changed, it is already in Tier 2.

As London and other big cities in the South enjoyed a nearly normal summer, the people of Bradford were following stricter rules and making the sacrifices with no end in sight.

Chief medical officer Chris Whitty told me on the day the government announced its new tier system at a televised news conference that Bradford has shown “superb leadership” in working to keep virus rates down in its community.

But getting through this winter is “going to be difficult, and everybody knows that”, he said.

It is particularly hard in the North West, North East and Yorkshire, where COVID levels and hospital admissions are rising fast.

All but one of the top 20 virus hotspots in England are in the North.

It is these cities and towns that are being hit the hardest by this second wave and I saw with my very own eyes this week the very real impact it’s having on people’s lives and livelihoods as I travelled to Bradford, Sheffield, Rochdale, Manchester and Liverpool.

If in the first lockdown we were “all in it together”, the second time around we are growing ever more apart.

As the initial wave receded, the choices on how to deal with the second one have become nuanced and contested, as the trade-offs between public health and the economy have become more finely balanced and hotly fought.

Image:
Sheffield metro mayor Dan Jarvis said he would back a stricter lockdown if there was more financial support

In his deserted office overlooking the redeveloped Park Hill estate on the edge of Sheffield, metro mayor Dan Jarvis is clearly worried.

A student city, Sheffield now has the eighth-highest weekly infection rate in the country and has been moved into the “high risk” Tier 2.

Mr Jarvis tells me he’d back a stricter lockdown in a heartbeat if he could guarantee the people of Sheffield that they’d get the economic support they need.

Image:
Sheffield has the eighth-highest weekly coronavirus infection rate in the country

“Yes [to stricter measures] from a public health point of view, because I’m not convinced that the restrictions that are brought in will do the job of reducing the rate of reinfection.

“But we’ve also got to look at the state of our economy as well.

“So, yes, I think it’s likely that there will be further restrictions introduced on the public health side.

“What I’m saying is that they need to come hand in glove with additional economic support measures.”

The message from the North over this past week is that the financial support being offered by Westminster is not enough and if central government won’t foot the bill, local leaders don’t believe their communities can – or should – carry the cost.

But as local and national politicians battle over the terms of regional lockdowns, people have been coming together in this crisis too.

In Liverpool, I meet Everton supporter Dave Kelly, whose ‘Fans Supporting Foodbanks’ volunteer group has been feeding hundreds of families through the coronavirus crisis, with Liverpool and Everton fans setting aside their sporting rivalries and working together to collect food and other donations to hand out to local families and schools.

As I help him unload boxes of clothes at the Fazakerley community centre in one of the poorest parts of Liverpool, he tells me that football fans and players from both the city’s great clubs have donated £200,000 to the charity in recent months.

But the new lockdown measures imposed on Liverpool this week are hurting.

“I shielded for months,” he tells me. “And now I’m going to have to do it again.”

And the volunteers at the local community centre are worried, angry and sceptical.

Image:
Maureen Delahunty-Kehoe, who works for the Fazakerley Community Federation, almost lost her father in the first wave

Angry that Liverpool is one of the only parts of the country being put into the strictest lockdown measures and sceptical that they will work.

Maureen Delahunty-Kehoe, who works for the Fazakerley Community Federation, tells me she nearly lost her dad to coronavirus in the first wave.

“The way people are going to come out of this are different extremes. Some people will be massively affected, some people have buried people.

Dave wants the government to act nationally rather than singling out Liverpool.

“We need to go into a total lockdown; not Liverpool, not Merseyside, not the Liverpool city region – we need to lockdown the whole country,” he tells me.

“Unfortunately I think the vast majority of Liverpool will probably think the government is more concerned with protecting the economy than its citizens.”

But as football fans put aside their differences, the political divisions in this second phase of COVID are becoming more fraught.

And that tension was nowhere more keenly felt than in Manchester where I ended the week under a cloud of uncertainty and palatable local anger over the attempts by Westminster to move Manchester city region and Lancashire – which is now going into Tier 3 after securing a £42m deal with government on Friday – into the same “very high” risk tier as Liverpool.

And in the city on Thursday, that stand-off between Westminster and Manchester played out in the city’s St Peter’s Square as metro mayor Andy Burnham, flanked by his deputies Sir Richard Leese and Bev Hughes, staged an impromptu news conference telling his people they were being used as the “canary in the coal mine for an experimental regional lockdown strategy” that might not work.

He said Westminster was “treating the North with contempt”.

It was a remarkable speech that spoke to the anger, anxiety and hardship being felt in Greater Manchester where, like in Bradford, people have been locked in Tier 2 restrictions for three months already with no extra financial support.

A crowd spontaneously gathered behind our TV cameras to cheer and applauded their mayor as he demanded extra financial support.

When I interviewed him after his statement, Mr Burnham told me that imposing Tier 3 on Manchester would “ruin thousands of peoples’ lives in this city” and he was not prepared to let it happen.

“There is nowhere near enough support in this deal – we will not surrender our residents to hardship in the run-up to Christmas – it’s as simple and as straightforward as that.

The government took a regional lockdown approach to try to safeguard the wider economy but my week in the North illuminated just how much this approach is reviving the north-south divide and reopening old grievances between the government and communities that feel forgotten and left behind.

It comes with a political cost to a Conservative government that promised to level-up this country and improve the lives of those who voted for Boris Johnson in Labour’s former Red Wall seats.

But there is a much bigger cost to this too.

As political progress stalls, the virus marches on – and that costs lives.