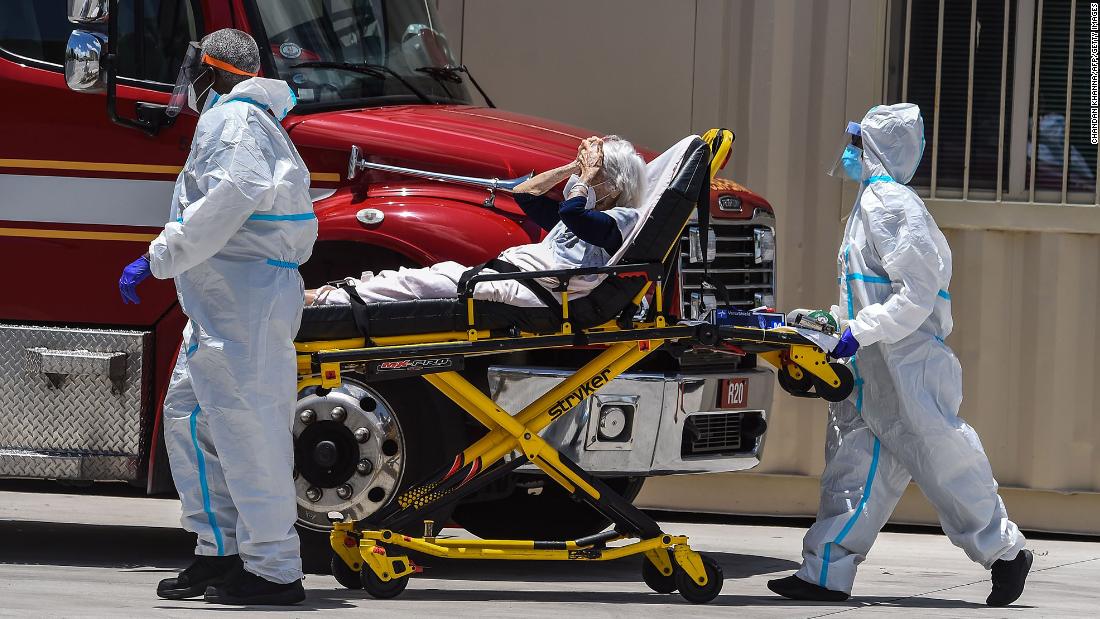 The alarming trends come ahead of a season that will likely be especially challenging. Students across the country have returned to class and college students — some of whom live in campuses that reported Covid-19 outbreaks — will soon return to visit their families and could unknowingly bring the virus back with them. And Covid-19 will also be stacked up against the flu season and could create what doctors call a “twin-demic.”

What happens next is unclear. But here’s how we got here:

On April 10, about a month after Covid-19 was declared a pandemic by the World Health Organization, the US hit its first high point during the pandemic, peaking at an average of a little more than 31,800 daily cases, according to data from Johns Hopkins University.Cases were clustered mostly in New York, with other, smaller outbreaks in places such as Washington state, Louisiana and Illinois. Around that time, New York state had more infections than any other country in the world, with more than 160,000 cases. As of October 16, the state has reported more than 481,000 infections.

By June 9, the US had flattened the curve and was averaging about 20,340 new cases daily, Johns Hopkins data showed. States were opening back up after weekslong lockdowns that were put in place to help curb the spread of the virus.

With the easing of measures, more Americans began to venture outside and images and videos emerged of parties and other gatherings with no social distancing and few masks in sight.

By July 22, the nation reached its highest peak of the pandemic, to date, averaging more than 67,000 cases daily. The US was seeing huge spikes in cases in the West and South.

The case surges came weeks after crowds celebrated the July 4 holiday. Across the country, local officials warned more young people were testing positive and helping drive the increase in infections. Arizona, Florida, California, Texas and Georgia were adding thousands of cases per day. Experts called Florida the epicenter of the pandemic and by the end of the month, more than four dozen hospitals across the state were reporting full ICUs.

By September 12, the summer peak had slipped down to a little more than 34,300 average new cases daily, according to data from Johns Hopkins. That baseline was higher than what it was in the spring and experts warned Americans should work to lower it as the nation was heading into the colder fall and winter months.

Now hotspots were spiking in the rural Midwest, as children in many US communities were returning to school, sports were starting back up and political rallies kicked into high gear. Just 10 days later, the country surpassed 200,000 deaths.

Now, we’re seeing another rise in cases. The US just surpassed eight million infections and more than 218,000 Americans have died.

The nation is averaging more than 53,000 new cases per day and at least 26 states reported more than 1,000 new infections in a day this week.

Unlike previous times, states that are reporting alarming trends are scattered across all regions of the US. The crush of new cases in the Midwest hasn’t let up and now places like the Northeast, which has remained relatively stable since the spring, is seeing a rise in cases.

Don't Miss it COVID-19 pandemic a ‘boon’ for legal cannabis in Canada as marijuana industry turns two
Up Next Business groups attack Vic coronavirus plan, warn it could be a 'death sentence' for many | ABC News