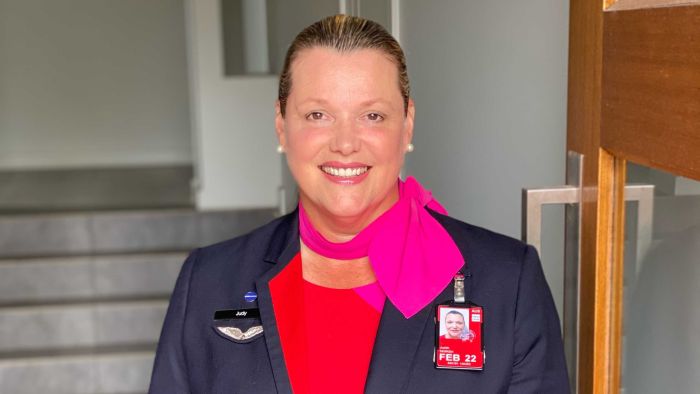 For tens of thousands of airline workers that have either lost their jobs or have been stood down because of international travel bans imposed due to the COVID-19 pandemic, finding new work has not been easy.

Key points:Thousands of Qantas and Virgin workers have lost their jobs, and many are still looking for workSome workers have been able to utilise their skills in other areas to find new workAirline workers who have been stood down are keen to get back to flying as soon as possible

Weeks later the airline was placed into voluntary administration and has since been purchased by American private equity group Bain Capital.

Airlines are in deep trouble

Governments have pumped $130 billion into keeping airlines afloat, but many have already collapsed and more will follow with big consequences for the cheap overseas travel we’ve become used to.

In June, Qantas announced it was sacking at least 6,000 workers and would continue to stand down a further 15,000 while international travel bans remained in place.

The airline also said about 100 of its aircraft would remain grounded for up to 12 months, with some for longer, and six 747s would be retired early.

Qantas has also revealed plans to save $100 million per year by outsourcing its ground handling work at major Australian airports. This could affect another 2,500 people.

While the airline sector has been one of the worst hit during the crisis, many workers have been redeployed into other services-oriented industries such as retail and healthcare.

ABC News spoke to two Qantas workers who have been luckier than most.

They have been able to draw on skills from previous careers to land temporary jobs until they can fly again.

After 28 years at Qantas, Judy Semken hung up her uniform.

Judy Semken started to search for work when she realised the pandemic could be long-term.(Supplied.)

The first- and business-class flight attendant was calm at first, but when she realised she could be out of work for more than a year, she started to panic.

“Initially I did not think [the COVID shutdown] would go on for the long term,” she said.

“I thought it was something for the short term. So, I did not start looking for another job. And I was quite busy at home looking after children and running a household.

“But then as it progressed, I thought, ‘I really need to do something else’. So, I started thinking of what options I had. And then turned back to my nursing.”

Judy Semken early in her career with Qantas cabin crew.(Supplied.)

Before joining Qantas, Ms Semken had trained as a nurse and worked in hospitals. She knew it would hard to retrain in a new skill. She decided to take up a new role in home care with a company called Vitalis.

“There’s definitely lots of similarities between flying and home care,” she said.

“You’re dealing with people all the time and looking after all their needs. Making sure they’re well looked after and well supported.”

The initial few days were “daunting”.

“I was very nervous,” she said.

“But it’s amazing how much comes back to you — all your previous studies. It all just flowed. It just felt really natural. It was like being back up in the air with passengers and just dealing with what they needed and looking after them.

“You have to think on your feet a lot, which is what you do with flying as well. When a situation arises you have to be able to think quickly and act upon it. So, you know, flying has definitely helped in a lot of ways.”

She said the most rewarding part of her new job was helping older people stay in their homes and feel independent.

“You’re looking after people who you’re helping to stay in their home as long as possible without them having to go into a nursing home,” she said.

“Sometimes it’s just [about] having a coffee with them and a chat. They’ve got no-one to talk to. They can be very lonely.

“I’ve learnt to value them as people and to look at the tough struggles they’re going through — and they are really struggling some of them — but they are just so grateful that you’re there to help.”

She said COVID-19 had posed somewhat of a challenge with rules and restrictions around masks and social distancing.

“I have a couple of clients who are deaf, so when they’re trying to lip read, they can’t really with my mask on, so that makes it a little bit challenging as well,” she said.

“I tend to write things down.”

Sydney Airport is usually Australia’s busiest international gateway, but during the coronavirus pandemic it stands empty and desolate. Take a rare look behind the scenes.

As much as she loves the work, Ms Semken hopes to return to her job as a flight attendant.

“Qantas has been a part of my life for 28 years so I would love to go back to it,” she said.

“I’m hoping that eventually some sort of vaccination will come about, and we’ll be able to fly within the next couple of years hopefully.

“If I was someone at Qantas thinking about trying a different role, I would definitely [tell them], ‘just go for it. You’ve got nothing to lose. You’ve got to give it a go and just be positive and get out there.'”

Sean Golding was just 21 years old when he managed to get a job as a second officer with Qantas.

Qantas pilot Sean Golding says he wants to get back to flying as soon as possible.(Supplied.)

Now, 31 years later, he’s a 787 captain and flight examiner in the Qantas simulator.

After March when COVID-led travel bans came into force, Mr Golding took up full-time work as a paramedic with NSW Health.

He had started training in paramedicine about five years ago, and two years ago started temporary work with state medical assistance, so when the airline industry came to a halt, he had a fallback.

He mainly does events and patient transport work, and says transporting suspected COVID-19 cases has been common in recent weeks.

“We could get somebody that’s quite ill,” he said.

“We could get somebody who has just got a minor injury. It varies. And that’s kind of the very interesting part of the day. Because we just don’t know what we are going to get.

“Our job’s just to make sure the patient is as comfortable as possible during the transport.

“We go through a lot of the procedures that we have to follow to ensure that the patient is safe — all of the decontamination of the vehicle.”

He said the main similarity between groundwork and flying was working with people.

Mr Golding wished he had a crystal ball to know when he could return to flying.

“That was the aircraft we flew from New York to Sydney and also from London to Sydney in those record breaking [long-haul] flights last year.

“And they’re the ones that we will get back in the air sooner than later hopefully. That’s what we are waiting for.”

Kangaroo in the coal mine

Airlines have been among the hardest hit by the coronavirus recession, but the swingeing cuts at Qantas carry a warning for the whole economy.

He said while a few of his colleagues had found employment, others were still struggling to find work.

“Never give up,” he advised.

“Part of the Aussie spirit is just, roll your sleeves up and get stuck into it.