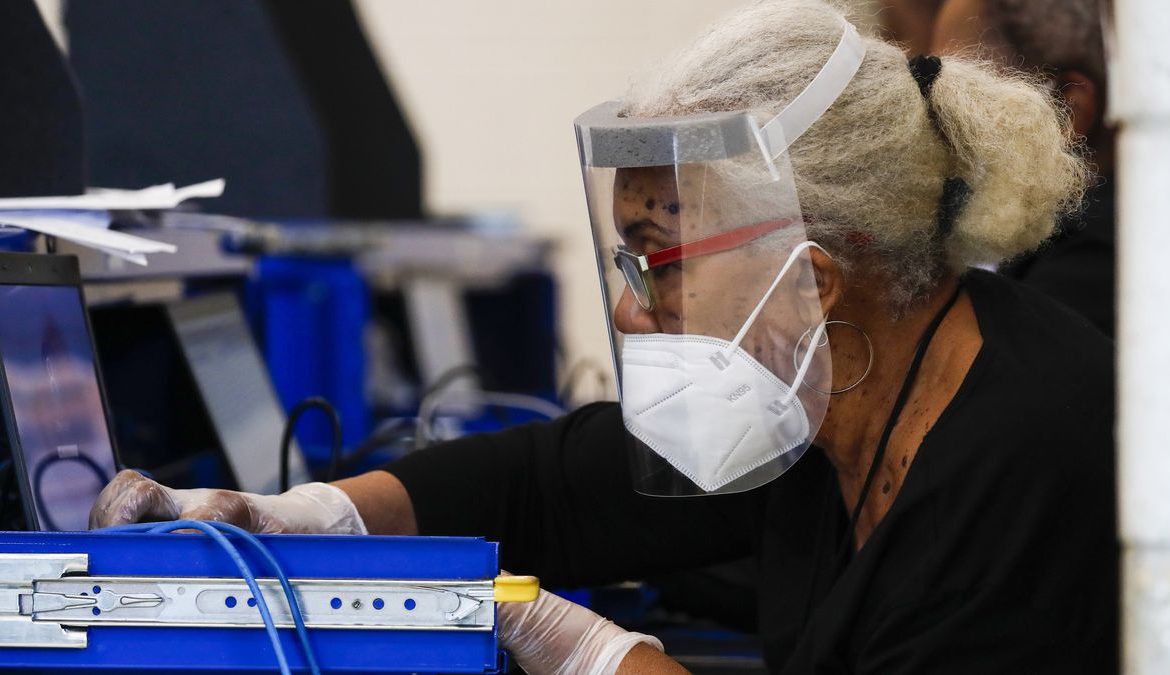 The mayor didn’t specify what measures she would turn to if COVID-19 cases continue to rise and said she hopes to avoid more painful steps. But, she said, she will if the cases continue rising. She asked residents to stop having dinner parties and card games, noting that people are letting their guards down and getting sick as a result.

Later in the day, Illinois health officials announced 3,113 new known cases of COVID-19 and 22 additional fatalities, bringing the total number of known infections in Illinois to 347,161 and the statewide death toll to 3,113 since the start of the pandemic. Officials also reported 48,684 new tests in the last 24 hours. The seven-day statewide positivity rate is 5.4%.

Meanwhile, Lightfoot is considering a $94 million property tax increase, layoffs for more than 300 city workers and a gas tax hike as part of her plan to close a $1.2 billion budget deficit, sources told the Tribune. The mayor is scheduled to explain her plans to close the city’s coronavirus-fueled budget deficit on Wednesday.

And on Sunday, Gov. J.B. Pritzker blamed President Donald Trump and his allies for the state’s rise in coronavirus numbers, arguing that the president’s anti-mask rhetoric convinces people that it’s all right to not cover their faces in public.

Here’s what’s happening Monday with COVID-19 in the Chicago area and Illinois:

Illinois health officials on Monday announced 3,113 new known cases of COVID-19 and 22 additional fatalities, bringing the total number of known infections in Illinois to 347,161 and the statewide death toll to 3,113 since the start of the pandemic. Officials also reported 48,684 new tests in the last 24 hours. The seven-day statewide positivity rate is 5.4%.

11:51 a.m.: Trump criticizes Anthony Fauci, says ‘people are tired of hearing’ him and ‘all these idiots’ on coronavirus

Speaking to campaign aides on a conference call, Trump insisted he believes he’s going to win, volunteering he didn’t have that sense of confidence two weeks ago when he was hospitalized with COVID-19. One week since returning to the campaign trail, where his handling of the pandemic is a central issue to voters, Trump blasted his government’s own scientists for their criticism of his performance.

Dozens of Chicago aldermen and state lawmakers have signed a letter saying they’re “deeply concerned” about the city’s plans to bring students back into Chicago Public Schools’ classrooms before the end of the year “and the foreseeable future.”

At the same time, the elected officials also said they are have concerns about remote learning, including the fact that some students still lack access to online lessons.

“We recognize that the current remote learning system is difficult for students, working families, and the educational staff committed to them,” the letter states. “At the same time, we also don’t want to put students in harms’ way, especially as other cities have encountered real difficulties in returning to in-person learning.”

A Wisconsin judge on Monday reimposed an order from Gov. Tony Evers’ administration limiting the number of people who can gather in bars, restaurants and other indoor places to 25% of capacity.

The capacity limits order was issued Oct. 6 by Andrea Palm, secretary of the state Department of Health Services, in the face of surging coronavirus cases in Wisconsin. A judge on Oct. 14 blocked the order after it was challenged by the Tavern League of Wisconsin, which argued it amounted to a “defacto closure” order for the bars and restaurants it represents.

Citing a dramatic increase in the number of coronavirus cases since the start of October, Chicago Mayor Lori Lightfoot on Monday threatened to reimpose stricter guidelines on businesses.

The mayor didn’t specify what measures she would turn to if COVID-19 cases continue to rise and said she hopes to avoid more painful steps. But, she said, she will if the cases continue rising. She asked residents to stop having dinner parties and card games, noting that people are letting their guards down and getting sick as a result.

“This is a time for each of us to dig down even deeper and be more diligent and if we don’t see a dramatic turnaround in our numbers and soon, then we will not hesitate to take the steps that are necessary to save our city, save our residents, even if that means going back to some of our Phase 3 restrictions.”

9:29 a.m.: Cases on the rise in long-term care facilities

The state’s increase in COVID-19 cases is also showing up in places where residents are particularly vulnerable: long-term care facilities.

Over the weekend, the Illinois Department of Public Health updated its weekly tallies from the state’s roughly 1,200 nursing homes and other long-term care facilities. The data shows the biggest jump in the number of new cases since late May — 1,101 new infections detected in residents, up from 651 the week prior, or 450 more new cases.

The overall number of new cases in long-term care is still about a fourth of the peak weekly increases seen in early May. The latest rise in long-term cases comes amid an overall jump in detected infections in Illinois. While increased testing is a factor in those trends, data also shows statewide increases in the percentage of tests coming back positive as well as in new hospitalizations and deaths, suggesting to researchers and public health experts that the infection is spreading more than it’s dying out, particularly downstate.

A dramatic increase in Illinois teachers retiring in recent months is likely linked to educators stepping away from the classroom because of COVID-19 health and safety concerns, state officials said on Friday.

From July through September, 566 teachers from across the state retired, a 45% increase from the same period in 2019, according to Teachers’ Retirement System of the State of Illinois data. The new retirements also come during a time when the numbers usually fall off.

7:05 a.m.: Lightfoot, health officials to give update on COVID-19 response

Mayor Lori Lightfoot and city Health Commissioner Dr. Allison Arwady were scheduled to give an update Monday morning on the city’s coronavirus response, according to the mayor’s office.

The briefing, which you can watch live here at 9:15 a.m., comes as Chicago, the state’s Region 11 in its COVID-19 reopening plan, has seen more the percentage of positive tests increase to more than 6 percent along with the number of coronavirus-related hospitalizations.

Gov. J.B. Pritzker on Sunday blamed the state’s surging COVID-19 numbers in part on President Donald Trump and his allies for not wearing masks and holding rallies that don’t require masks.

The Illinois Restaurant Association announced Monday morning that its nonprofit arm is accepting applications for a relief fund for restaurant workers affected by the coronavirus pandemic.

Grants through the association’s Educational Foundation Restaurant Employee Relief fund can be used to “cover basic living expenses such as rent, food and utilities,” according to a release from the association.

“Conservative estimates indicate that at least 20 percent of restaurants will be forced to close their doors permanently, resulting in the loss of almost 120,000 jobs,” said association President Sam Toia, in the release. “Establishing this fund was a necessary step to do all that we can to secure the stability of our current workforce. We need to help as many people as possible across Illinois.”

The fund will provide $500 stipends for restaurant workers affected by coronavirus. Priority will be given to those who have been diagnosed with COVID-19 and those who have been out of work for three weeks or longer without unemployment benefits, according to the release.

Donors that helped establish the fund included Southern Glazer’s Wine & Spirits, Telemundo, Associated Beer Distributors of Illinois and insurance company EMPLOYERS, according to the release. More donations have come from private donors and fundraisers; anyone wishing to donate may text “RELIEF” to 773-985-2703. Applications can be submitted and more information found on the association’s website, www.illinoisrestaurants.org.

The fund is one of two announced in August.

6 a.m.: In a year of unexpected tragedy and turmoil, Chicago police Superintendent David Brown sought to reshape his department

On a brisk, sunny day in April, David Brown walked around in front of a South Side funeral home sporting a mask as scores of police vehicles lined the street to honor a Chicago police officer who had succumbed to COVID-19.

The pandemic prevented Brown, just days on the job as Chicago’s new top cop, from delivering remarks in the Calahan Funeral Home. Instead the new superintendent talked to reporters across the street from the building for about two minutes and stuck to the talking points of the day, offering condolences to Sgt. Clifford Martin’s family.

Despite the circumstances, it was nothing remarkable for a police leader taking on one of his ceremonial duties. Brown was still trying to ease into his role, going from leadership of police in Dallas to remaking the Chicago Police Department in his own image, and he had felt up to the job.

“While many people may think of Dallas like the 1980s TV show, J.R. Ewing, and cattle ranchers and 10-gallon hats and oil fields, I grew up in a neighborhood that looked more like Chicago’s West and South Side,” Brown had told the Chicago City Council’s Public Safety Committee the day before Martin’s funeral. “I know the joys of living surrounded by others. I also know the struggles of growing up poor, living and working in a historically segregated city, as Dallas and Chicago share these difficult pasts and present.”

But perhaps nothing could have prepared Brown for the months to come. He would quickly find himself attempting to help steer Chicago through the pandemic crisis and its effects, surging summer violence and civil unrest.

But there is less Italian and Greek heritage on the menu these days on two of Chicago’s best-known dining corridors.

“We have tourists come in and ask, ‘Where is Little Italy?’” said Ralph Davino, third-generation owner of Pompei, one of a handful of Italian restaurants that remain on Taylor Street. “I have to tell them it’s gone.”

The Italian and Greek flair that distinguished those neighborhoods has been ebbing for years, a result of changes in demographics and consumers’ palates. The booming Fulton Market district nearby and encroaching real estate development added new pressures. Some worry the pandemic will be the final straw.

Cottages and cabins are in high demand for the late fall and approaching winter, as we attempt to ease our way through our collective cold-weather confinement forced by COVID-19, without the respite of the summertime outdoors.

In the Midwest, vacation rental owners say they’re seeing a spike in winter bookings, as their quaint getaways offer a particularly appealing hygge aesthetic — a Danish term for cozy contentment — that is proving irresistible to those suffering from wanderlust.

With social distancing in mind, secluded cottages and cabins are proving to be increasingly popular escapes, but hosts caution that people should monitor state travel restrictions and plan their trips thoughtfully to reduce the spread of the coronavirus.