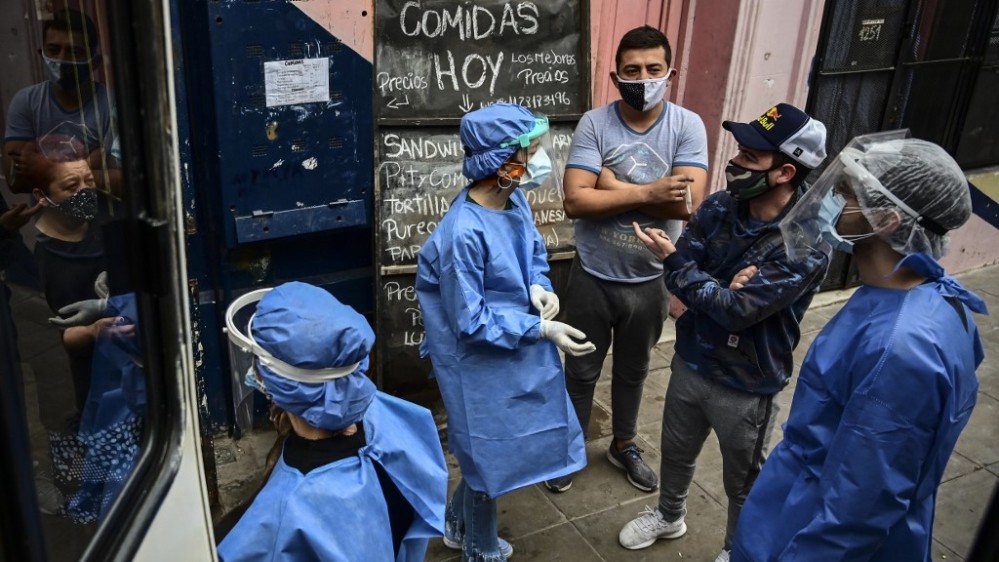 Argentina has passed one million coronavirus cases and it is now smaller cities like Ushuaia – known as “The End of the World” at the edge of the country – that are seeing some of the most notable upticks.

Doctors have had to quadruple the number of beds for COVID-19 patients over the last month.

At least 60 percent of those tested recently are coming back positive for the virus.

“We were the example of the country,” said Carlos Guglielmi, director of the Ushuaia Regional Hospital. “Evidently, someone arrived with the coronavirus.”

Across Latin America, three other nations are expected to reach a million-case milestone in the coming weeks – Colombia, Mexico and Peru.

The grim mark comes as Latin America continues to register some of the world’s highest daily case counts.

And though some nations have seen notable declines, overall there has been little relief, with cases dropping in one municipality only to escalate in another.

The trajectory is showing that the pandemic is likely to leave no corner of Latin America unscathed.

“The second wave is arriving without ever having finished the first,” said Luis Jorge Hernandez, a public health professor at the University of the Andes in Colombia.

Argentina has seen cases spiral despite instituting one of the world’s longest lockdowns.

Colombia’s large cities have seen a dip, but smaller areas like the department of Caldas in the coffee region are reaching a peak only now.

Mexico, likewise, has seen a rise in a quarter of all states over the last week.

A demonstrator holds a placard that reads ‘their richness is our poverty’ during a rally to demand resources for the vulnerable, amid the coronavirus disease lockdown, in Buenos Aires [File: Agustin Marcarian/Reuters]“Our countries are still getting out of the first wave,” said Marcos Espinal, director of the Pan American Health Organization’s Department of Communicable Diseases.

“A great part of the population remains exposed and community transmission continues.”

The virus’s cruel path through Latin America is a consequence of weak public health systems, poverty and poor government decisions early on that resulted in flawed or limited testing and little contact tracing.

Today, the region is home to half of the 10 countries with the highest total cases around the globe.

Argentina initially registered low numbers but now has one of the highest rates of new daily infections per capita, according to Our World in Data, a non-profit online scientific publication based at the University of Oxford.

It is on par with several European countries that are experiencing a resurgence of the virus.

Throughout the region, testing remains a hurdle.

In Peru, officials have relied heavily on antibody tests to identify cases – even though the tests are not designed to make a diagnosis because they can only detect proteins that develop a week or more after infection.

Argentina’s testing is still far below that of neighbouring countries. On Sunday, just 13,890 people were tested compared with 31,988 the same day in Colombia.

“The failure in Argentina was the low amount of testing,” Guglielmi said.

“Living at the end of the world was never easy,” he said. “It’s a lot less easy in a moment like this.”

Don't Miss it US Election 2020: How will President Trump’s hospitalisation affect the race? – BBC Newsnight
Up Next Covid-19’s Global Divide: As West Reels, Asia Keeps Virus at Bay