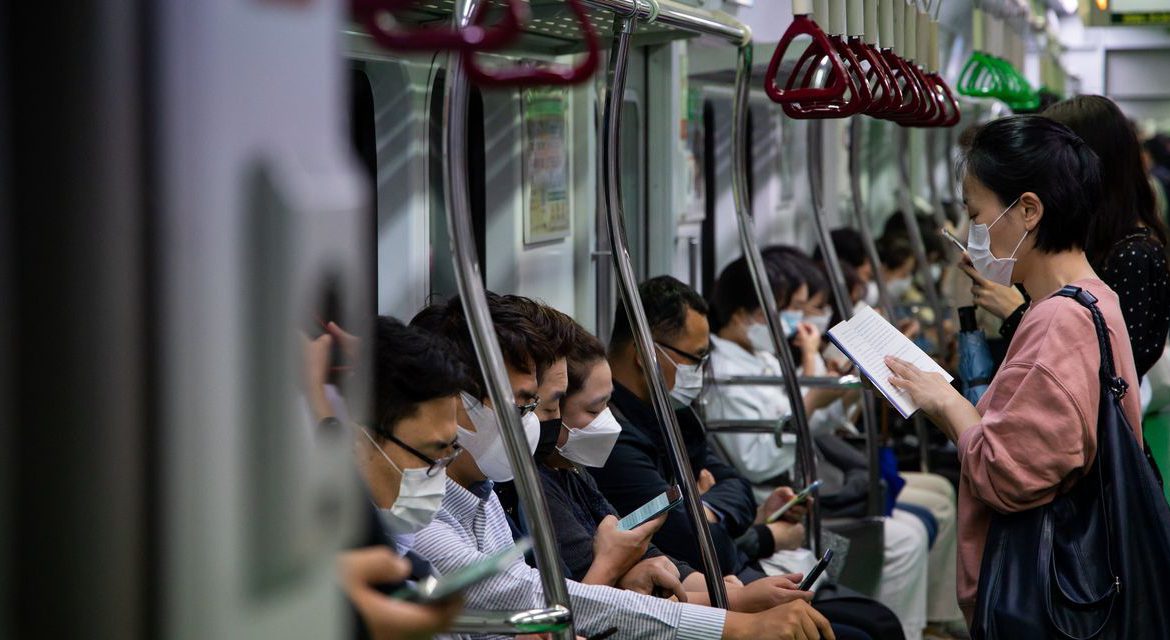 While a surge in coronavirus infections is forcing U.S. states and European countries to shut down bars, open field hospitals and limit social gatherings to small groups of people, such measures are becoming distant memories in much of Asia.

For months now, life across Asia, where the virus first emerged, has mostly returned to normal. With infections at low levels, bars and restaurants are bustling, subway trains are packed and live concerts and spectator sports have resumed.

While China, Japan, South Korea, Singapore and Hong Kong, combined, have been recording fewer than 1,000 cases a day since September, the U.S. alone was reporting more than 56,000 cases a day on average as of Monday, the highest number since early August.

Europe—where spring lockdowns successfully squeezed infections down to a trickle—is now experiencing a second wave, with an average of 88,000 daily cases as of Monday, more than ever before.

Roughly a third of the world’s population resides in East Asia and Southeast Asia, but the densely populated region accounts for less than a fifth of the world’s 1.1 million Covid-19 deaths. Europe and the U.S. account for nearly half of that.

“If you can control the virus, you can get 95% of your life back,” says Ashish Jha, dean of the Brown University School of Public Health. “In the U.S. and Europe, we wanted to get our lives back, so we acted as if the virus was under control. In Asia, they were not in denial. They understood they can have their lives back if they follow certain precautions.”

The world, in effect, is split: While Asian countries, which moved swiftly to contain their outbreaks early on, persisted in their fight against the virus, growing pandemic fatigue in the U.S. and Europe has led to relaxed attitudes about social distancing that are complicating efforts to control a resurgence. As cases rise, Western governments are struggling with testing shortages and contact tracing is becoming ineffective. Many in the West are pinning their hopes on a vaccine for life to return to normal.

Asia, on the other hand, has managed to suppress the virus largely without the nationwide lockdowns that crippled Western economies in the spring. Governments there have put in place aggressive contact-tracing efforts, quarantine programs to isolate those infected and strict international-travel requirements. Cultural differences, consistent messaging and experience with outbreaks of SARS and MERS have led to more widespread acceptance of practices such as wearing face masks and, in some places, more intrusive government intervention.

“Independent actions will have consequences on the health of others, and this is very well appreciated in most Asian societies,” says Teo Yik-Ying, dean of the Saw Swee Hock School of Public Health at the National University of Singapore. “The advice is very consistent. It’s how countries implemented and enforced that advice that is different. Asians were better at taking advice and putting in place the necessary rules.”

The more successful handling of the pandemic in Asia has yielded better economic performances. The International Monetary Fund projected China’s economy to expand by 1.9% in 2020, making it the only major world economy to grow this year amid the pandemic. The U.S. economy is expected to shrink by 4.3%, while the eurozone is forecast to contract by 8.3%.

Although daily infections in East Asia are at a low level, people there are still as or more likely than Europeans or Americans to wear face masks and sanitize their hands, according to recent polls by Imperial College London and YouGov. Asians are also more likely to fear infection, with 80% of South Koreans last month saying they were scared of catching the virus, compared with 58% of Americans and 45% of people in Spain.

“It’s uncomfortable and tiring to wear a mask all the time, even inside the office, but I would rather make sacrifices than see explosive cases like in Europe or America,” said Kim Ye-joo, a 26-year-old office worker in Seoul. “We wear masks in the subway and outdoors, but what’s the point of us keeping infections low if restrictions remain because other countries can’t keep it under control?”

A waiter closes a bar terrace in Lille, northern France. Tourists and young people are key drivers of the resurgence in infections in Europe.

Francesco Wu, an Italian-Chinese restaurant owner based in Milan, says culture helps explain the different popular attitudes in the East and West.

“Here we are used to having so many liberties—and that’s a great thing,” says Mr. Wu, 39, who grew up in Italy. “But we are not as used to discipline, to self-sacrifice. If we are locked up in our homes for a month we become restless, we can’t take it anymore.”

What strategies followed by East Asian countries should the West adopt to contain the coronavirus? Join the conversation below.

Asian governments have prevented infections from spreading widely also thanks to surveillance tactics implemented early on. In South Korea, investigators sift through smartphone data, credit-card records and CCTV footage to track down close contacts of those infected. People must scan QR codes with their phone when entering nightclubs, karaoke bars or movie theaters, to make it easier to track them down should an outbreak occur. In recent weeks, all but 20% of infection routes have been tracked down by South Korean health authorities.

While successful, such measures drew criticism over privacy violations and haven’t been replicated in the West. Voluntary tracking apps introduced in parts of Europe, for instance, failed to gain widespread usage.

Clusters of infections have occurred across Asia as people returned to workplaces and schools. But rather than imposing strict lockdowns, many Asian countries tightened social-distancing guidelines and expanded testing when infections rose.

South Korea reported one of the first major coronavirus outbreaks outside China, yet has kept infections low compared to the U.S. WSJ’s Dasl Yoon shows how smartphones have become one of the country’s most effective weapons against the pandemic. Photo: Denis Bosnic for The Wall Street Journal (Originally published July 16, 2020)

The limited circulation of the virus has allowed health authorities to track down close contacts of virus carriers more effectively and to mount large-scale responses to even small outbreaks. After 12 cases linked to a hospital in the Chinese city of Qingdao were discovered, authorities last week began testing all of the city’s nine million residents.

When a large cluster linked to a church and a rally emerged in South Korea in August, the government responded by shutting down sports stadiums, banning gatherings of more than 10 people and forcing schools in the Seoul metropolitan area to return to online learning. Cases peaked at 441 new daily infections in late August, and the restrictions have since been lifted.

Stringent quarantine rules across Asia have made a big difference. Rather than isolate at home as in the U.S. and Europe, virus carriers are typically moved to government-run facilities, even if they have mild or no symptoms. In countries including Vietnam, Hong Kong and Singapore, close contacts of infected people must also stay in quarantine facilities.

In Western countries, adherence to quarantine rules has been patchy. In the U.K., for instance, people with Covid-19 symptoms and those living with them are advised to remain at home for 14 days. But a study by researchers at King’s College London published last month found that public adherence to those rules was poor, with around three-quarters of participants interviewed saying they had left their home in the previous 24 hours.

Asian countries have also had much more severe travel restrictions. Visitors are typically required to test for the virus upon arrival. Places such as Hong Kong, South Korea and New Zealand also require a two-week government-monitored quarantine.

In the Asia-Pacific, 61% of countries or territories remain completely closed to foreign tourists, according to a report by the World Tourism Organization.

A bar area in Beijing. The IMF expects China to be the only major world economy to grow this year amid the pandemic.

When infection rates dropped earlier this year, European governments moved quickly to reopen borders within the continent, and encouraged tourism during the summer. Tourists and young people were key drivers of infections, with the virus circulating widely in bars, nightclubs and beach-holiday destinations.

Thanks to improved detection, most people infected in the summer had mild or no symptoms. But as cases soar, hospitalizations and deaths are also rising.

“In Europe during the summer there was this idea of the economy versus public health, so that we needed to open up much more to help tourism. Asia hasn’t done that,” says Helena Legido-Quigley, a public-health professor at the University of Singapore currently based in Barcelona. “It’s not one or the other: You don’t have to choose between public health and the economy.”

Despite the rising numbers of infections, many Westerners have grown tired of restrictions on their social life and say they would rather risk catching the virus than stop seeing family and friends.

“I am not afraid at all of the virus,” said Antonio López, an 80-year-old resident of a senior-care home on the outskirts of Barcelona who recently started meeting up again with family members for walks. “And I missed my son badly.”

—Jason Douglas in London, Jonathan Cheng in Beijing, Matthew Dalton in Paris, Peter Landers in Tokyo, and Xavier Fontdegloria in Barcelona contributed to this article.