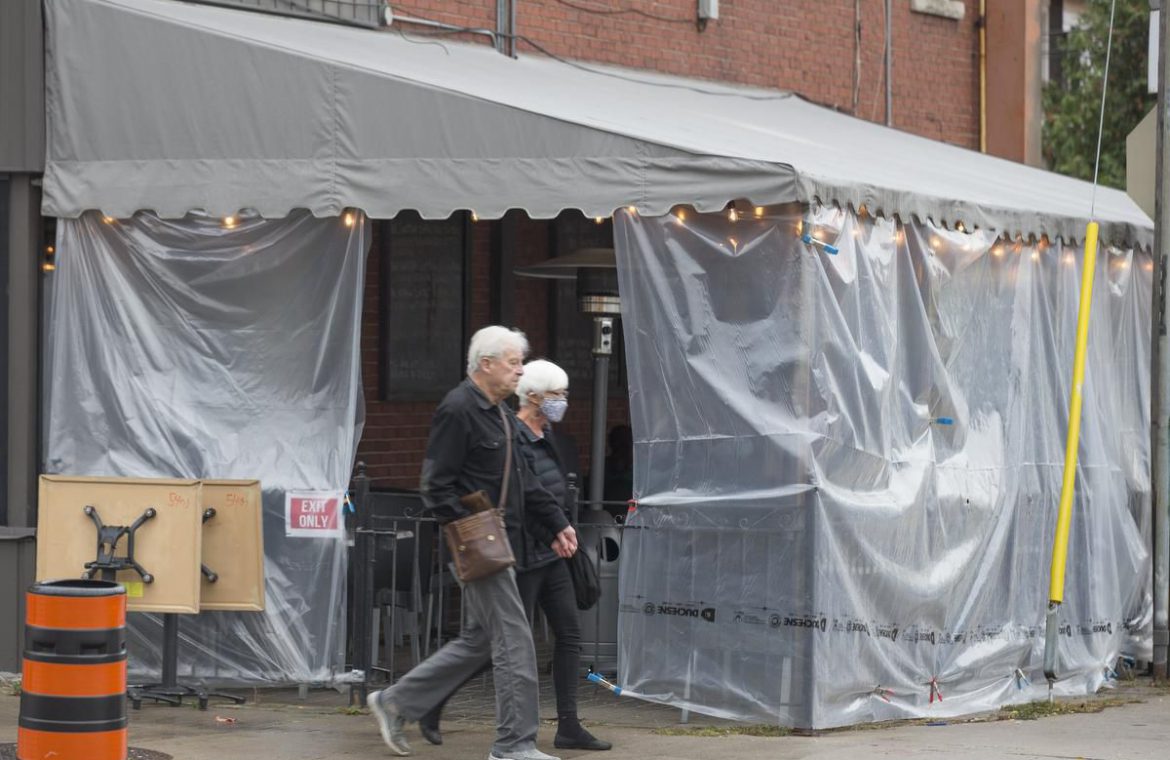 9:11 a.m. Hong Kong airline Cathay Pacific Airways said Wednesday it would cut 8,500 jobs and shut a regional airline as it grapples with the plunge in air travel due to the pandemic.

About 5,300 employees based in Hong Kong and another 600 elsewhere will likely lose their jobs, and 2,600 unfilled positions will be cut. The cuts are about 24 per cent of the company’s workforce, Cathay Pacific said in a statement.

“The global pandemic continues to have a devastating impact on aviation and the hard truth is we must fundamentally restructure the group to survive,” Cathay Pacific CEO Augustus Tang said in a statement.

“We have to do this to protect as many jobs as possible, and meet our responsibilities to the Hong Kong aviation hub and our customers,” Tang said.

The company said it will also shut down Cathay Dragon, its regional airline unit, with operations ceasing from Wednesday.

It was the fourth consecutive monthly increase for retail sales since a record drop in April, when pandemic-related restrictions shuttered most non-essential businesses.

Economists on average had expected an increase of 1.1 per cent, according to financial data firm Refinitiv.

Sales at building material and garden equipment and supplies dealers rose 4.5 per cent, while sales at food and beverage stores climbed 0.8 per cent.

Retail sales in volume terms were up 0.5 per cent in August.

The results came as Statistics Canada says an preliminary estimate for September suggests retail sales were relatively unchanged for the month, but added that the figure will be revised.

8:40 a.m. A dispute over the scope and composition of a House of Commons committee will come to a head Wednesday in a vote that could trigger a federal election in the midst of the second deadly wave of COVID-19.

Prime Minister Justin Trudeau has declared that the vote on a Conservative motion to create a special anti-corruption committee will be test of confidence in his minority Liberal government.

The Conservatives are willing to drop “anticorruption” from the name of their proposed committee but the intent remains the same: to create a disproportionately opposition-dominated committee to investigate the WE Charity affair and other issues the official Opposition maintains reek of the government funnelling pandemic-related funding to Liberal friends.

8:37 a.m. Statistics Canada say its consumer price index in September was up 0.5 per cent compared with a year ago. The reading compared with an year-over-year increase of 0.1 per cent in August.

Economists on average had expected a year-over-year increase of 0.4 per cent, according to financial data firm Refinitiv.

8:32 a.m. A crowd of 11,388 attended Tuesday night’s World Series opener between the Los Angeles Dodgers and Tampa Bay Rays, spread in groups of up to four, mostly in alternate rows and none directly behind each other among the forest green seats.

That was the smallest crowd for the Series since 10,535 attended Game 6 in 1909 between the Tigers and Pittsburgh at Detroit’s Bennett Park, according to the Elias Sports Bureau.

Major League Baseball planned to make about 28 per cent available of the 40,518 capacity at the retractable-roof stadium of the Texas Rangers. The new $1.2 billion (U.S.) venue opened this year and replaced Globe Life Park, the team’s open-air home from 1994 through 2019.

8:30 a.m. The U.K. government’s borrowing rose to the highest level on record in the first half of the financial year as tax revenue fell and authorities spent billions of pounds to prop up an economy ravaged by the coronavirus pandemic.

The Office for National Statistics said Wednesday that the government borrowed a net 36.1 billion pounds ($47.1 billion U.S.) in September, pushing the total for the first six months of the year to 208.5 billion pounds. That’s the highest figure since records began in 1993.

Taxe revenue dropped 11.6 per cent from a year earlier in the six months through September. At the same time, support for individuals and businesses to get through the pandemic contributed to a 34 per cent increase in day-to-day spending.

Public sector net debt now stands at 103.5 per cent of the U.K.’s annual economic output, the highest level since 1960, the ONS said.

7:30 a.m. Pakistan’s military-backed National Command and Operation Center has issued a warning that another lockdown could be imposed to contain COVID-19 deaths if people don’t stop violating social distancing rules.

The announcement on Wednesday came after Pakistan reported reported 660 new confirmed cases in the past 24 hours and 19 single-day deaths.

The daily death toll was one of Pakistan’s highest in more than two months. Deaths from COVID-19 have steadily increased since the government lifted its months-long lockdown in August.

Pakistan has reported 324,744 confirmed cases of the virus and 6,692 virus-related deaths since February.

7:22 a.m. Poland has reported a new record for daily coronavirus cases after conducting a record number of virus tests.

Authorities in large cities are taking steps to turn conference halls into temporary COVID-19 hospitals, and the city of Krakow is planning to reopen a disused hospital to treat coronavirus patients.

Polish lawmakers are debating legislation that would give more funds to medics and temporarily exempt them from legal responsibility for mistakes that take place while treating people for COVID-19.

A statement released on the hospital’s website reported five active cases amongst staff related to the outbreak with no reports in patient cases.

According to the statement, “outbreak status” refers to “two COVID-19 cases within a 14-day period, where both cases could reasonably have been acquired in hospital.”

The hospital determined that the risk of patient exposure is low, and that they will be reaching out to any patient who had direct contact with the staff who tested positive.

Read the full story from the Star’s Zena Salem here.

A total of 235 crew from Russia and Ukraine were on the flight chartered by three fishing companies. Before leaving Moscow, they were supposed to have self-isolated for two weeks and tested negative for the virus. All remain in quarantine at a Christchurch hotel.

5:42 a.m.: Australian authorities say they’re treating a COVID-19 case in the city of Melbourne as a rare reinfection. The only coronavirus case reported in the former hot spot of Victoria state on Tuesday had also tested positive in July.

Victoria Premier Dan Andrews said Wednesday an expert panel’s decision to classify the case as a reinfection reflected “an abundance of caution” rather than conclusive evidence. Melbourne has been in lockdown since early July, but restrictions in Australia’s second-largest city are easing this week as daily infection tallies remain low.

5:42 a.m.: Indian Prime Minister Narendra Modi says laxity could lead to a new surge in infections, as India reported 54,044 new coronavirus cases in the past 24 hours, taking the overall tally past 7.6 million.

The Health Ministry on Wednesday also reported 717 additional deaths for a total of 115,914. Deaths and new cases per day have been declining in India since last month, but Modi is urging people to continue wearing masks and observing social distancing until a vaccine is available.

Health officials have warned about the potential for the virus to spread during the ongoing religious festival season that includes huge gatherings in temples and shopping districts.

5:42 a.m.: The Philippines on Wednesday lifted a ban on non-essential foreign trips by Filipinos, but the immigration bureau said the move did not immediately spark large numbers of departures for tourism and leisure.

The government has gradually eased travel restrictions to bolster the economy, which slipped into recession in the second quarter following months of lockdown and quarantine to fight the coronavirus pandemic.

5:40 a.m.: The U.K. government’s borrowing rose to the highest level on record in the first half of the financial year as tax revenue fell and authorities spent billions of pounds to prop up an economy ravaged by the coronavirus pandemic.

The Office for National Statistics said Wednesday that the government borrowed a net 36.1 billion pounds ($47.1 billion) in September, pushing the total for the first six months of the year to 208.5 billion pounds. That’s the highest figure since records began in 1993.

Tax revenue dropped 11.6 per cent from a year earlier in the six months through September. At the same time, support for individuals and businesses to get through the pandemic contributed to a 34 per cent increase in day-to-day spending.

5:40 a.m.: A day after donning a face mask for the first time during a liturgical service, Pope Francis was back to his maskless old ways Wednesday despite surging coronavirus infections across Europe.

Francis shunned a face mask again during his Wednesday general audience in the Vatican auditorium, and didn’t wear one when he greeted a half-dozen maskless bishops at the end. He shook hands and leaned in to chat privately with each one.

5:30 a.m.: A new satellite COVID-19 testing site that was intended to increase access for those who need it most is deepening frustrations in Toronto’s hard-hit northwest corner, amid a “testing mess” that has left more than 125 patients waiting — in some cases for over two weeks — for results.

York South-Weston MPP Faisal Hassan, who fought for months to bring the assessment centre to Humber River Hospital’s Church Street site, said the testing delays are a “disaster” in a community with disproportionately high COVID rates, where many residents are front-line workers unable to work from home.

“This is a complete failure of the government’s leadership here in our community,” Hassan said. “They have been far too slow to address the COVID crisis in our community. Once again, we are being neglected. We are putting more lives at risk.”

Read the full story from the Star’s Rachel Mendleson and Megan Ogilvie here.

4 a.m. The B.C. Liberals and NDP are squabbling over how the COVID-19 pandemic might affect voter turnout in Saturday’s election.

Liberal Leader Andrew Wilkinson defended a news release from his party on Tuesday that questioned NDP Leader John Horgan’s decision to call the election a year early, arguing it “is suppressing voter turnout and putting those that do vote at risk.”

Horgan said Wilkinson is off base, adding that almost 500,000 people have voted in advance polls and more than 700,000 mail-in ballots have been requested.

He said those numbers show the level of interest in the campaign.

But she also rejected suggestions that the best way to unite progressive voters is to back the NDP, saying people should cast their ballots out of inspiration or hope.

Don't Miss it Covid-19: Is Sweden getting it right? – BBC News
Up Next Covid-19 Vaccines to Be Stored Secretly Under Tight Security