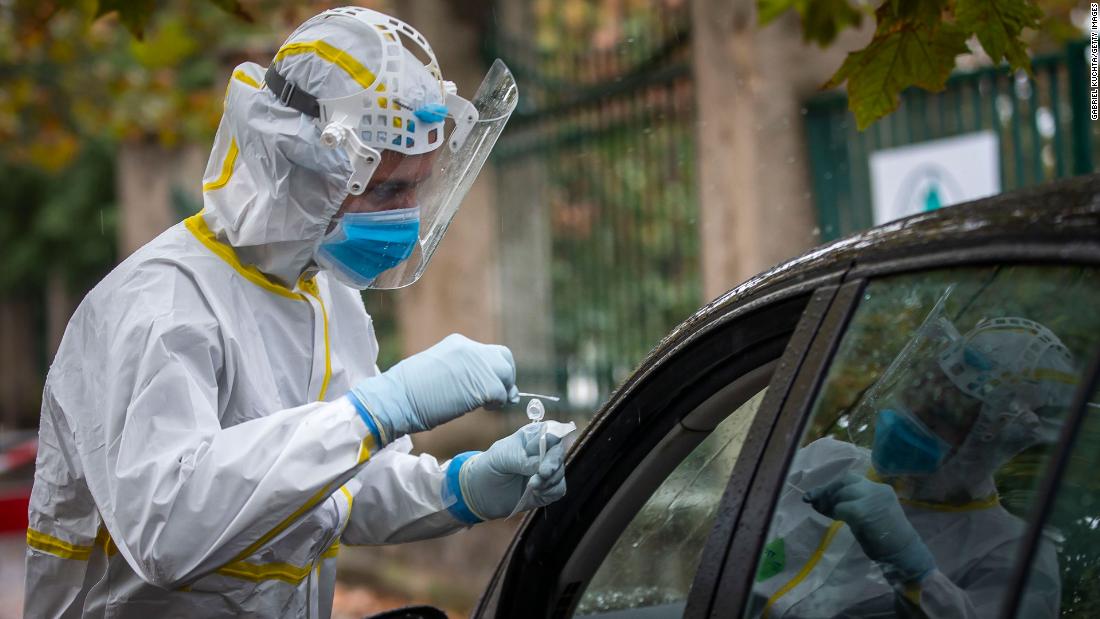 “I am sorry for the new restrictions that will impact lives of business owners, citizens, employees. I am also sorry for having de facto ruled out the possibility of this happening because I could not imagine that this would happen,” Babis said.

The Czech leader’s contrition came as other European nations, including Germany and Poland, reported record daily new case numbers, and Ireland prepared to impose the strictest lockdown in Europe.

Both Spain and France surpassed 1 million total recorded Covid-19 cases on Wednesday, according to Johns Hopkins University (JHU) figures. They join the United States, India, Brazil, Russia and Argentina in passing that threshold.

The number of cases reported by the French health ministry is lower than the JHU total, at 957,421 as of Wednesday.

Yet the new Czech measures, which came into force Thursday morning, include limits on people’s free movement and the closure of non-essential services and stores. They will remain in place until November 3.

A strict mask mandate was also reinstated on Tuesday, making them compulsory anywhere within urban areas and in cars.

For weeks, the Prime Minister refused to impose stricter rules on the population, citing the need to protect the economy. But the decision — which in some instances contradicted expert opinion — has led to an out-of-control spread of the virus.

The nation of 10 million is now reporting more new Covid-19 cases per 100,000 people than any major country in the world. It reported almost 15,000 new infections on Wednesday, an all-time high.

The Czech Republic was praised for the way it handled the first wave of the pandemic in the spring when the government imposed an early lockdown and made masks compulsory at a time when most of the Western world barely considered that move. That strict mandate was lifted over the summer, however, when the government believed it had the epidemic under control.

Babis admitted Wednesday that the country had become a victim of its own success.

“We certainly made mistakes when we thought at the end of May, when we finished the reopening, that we had managed it,” he said.

Such is the extent of the crisis that Health Minister Roman Prymula announced Wednesday that the United States National Guard was sending 28 doctors to help the stretched Czech health care system.

The total number of recorded cases is now 202,579, according to the Ministry of Health. The known death toll from Covid-19 rose to 3,851, with 130 people dying with the disease in the preceding 24 hours.

Polish Prime Minister Mateusz Morawiecki announced the creation of an extra 13,000 hospital beds to take capacity up to 30,000 in total, as he addressed the surge in new infections during a speech in parliament. Temporary hospitals are also being built in the national stadium and in exhibition halls.

Germany’s center for disease control, the Robert Koch Institute, on Thursday reported a record high number of daily coronavirus cases, with 11,287 new cases in a single day. The country has reported a total of 392,049 cases and has a total known death count of 9,905.

Both France and Spain have each recorded over 34,000 deaths, according to JHU data. Both countries have been struggling to contain a second wave of coronavirus infections after being hit badly in Europe’s first wave in the spring.

Ireland’s strict new lockdown measures came into force Thursday and are set to remain in place for six weeks.

“We just need to remember that we are doing this to protect our families and the most vulnerable in our communities. We will come through it and we will see each other again,” Taoiseach Micheál Martin tweeted late Wednesday.

Under the restrictions, people are asked to work from home unless providing an essential service. Social gatherings in homes and gardens are prohibited, but people can exercise in parks within 3 miles of their homes. Schools, childcare services and “essential retail” services will remain open but bars and restaurants can open only for takeaway and delivery service.

Ireland recorded an increase of nearly 2,000 new cases last week over the week before, prompting the government to announce the stringent measures Monday.

Measured against their populations, the Czech Republic and Belgium are seeing the highest number of new coronavirus cases worldwide, according to a CNN analysis of data from JHU and the World Health Organization.

As of October 16, both countries were reporting a daily average of more than 800 new cases per million of their populations, with the Czech Republic at 817 and Belgium tallying 811. Those figures represent roughly a quadrupling of new cases in the first two weeks of the month.

The Netherlands is the next worst affected, with an average of 462 new cases per million population on October 16, compared to 172 at the beginning of the month.

Poland, meanwhile, had an average of 214 new cases per million people on October 16, more than four times higher than the figure at the start of October.

Italy, one of the worst-affected countries earlier this year, has also seen a sharp rebound in cases reported. It stood at an average of 151 per million on October 16, up from just 36 at the beginning of October. In the same period, Germany’s per million tally of new cases rose from 27 to 75.

Don't Miss it Premier Ford to speak as Ontario reports 841 more COVID-19 cases, 7-day average on the rise
Up Next European countries rush to slow spread of COVID | Coronavirus update