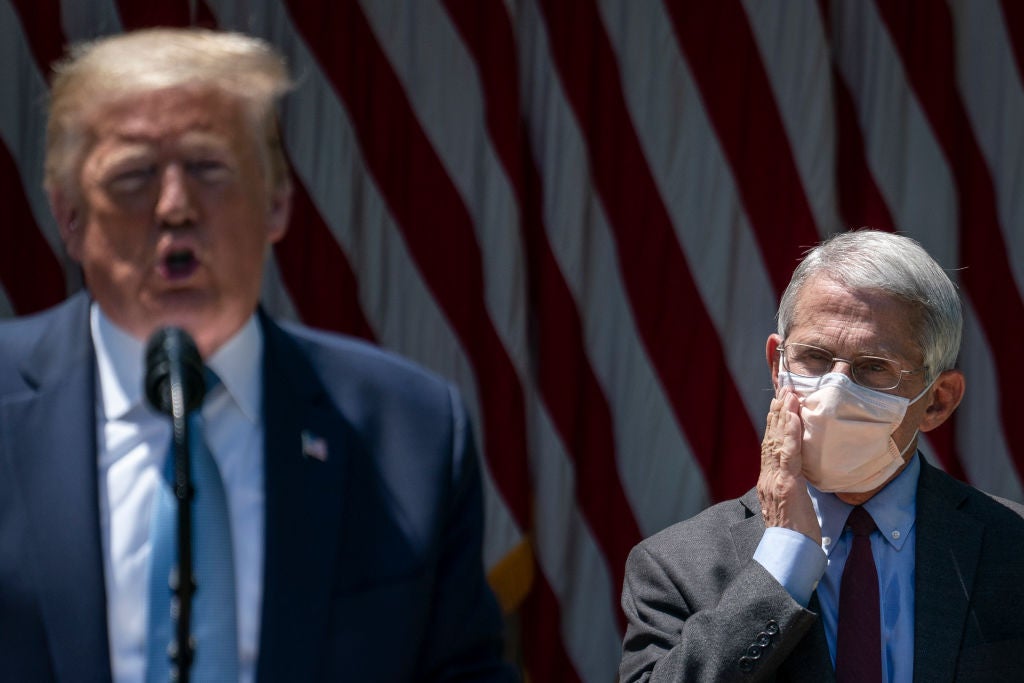 President Donald Trump has blamed Dr Anthony Fauci for the country’s coronavirus response at the start of the pandemic by accusing the expert of flip-flopping on his advice to Americans.

The accusations came during the third presidential debate.

“I get along very well with Anthony … He said it’s not going to be a problem,” Mr Trump said about the pandemic. “Fauci said don’t wear masks, then he said wear masks!”

Mr Trump claimed that Dr Fauci told the American public the coronavirus pandemic would not be a problem, but that statement is inaccurate.

On 29 February, Dr Fauci said that the risk of the novel virus was low “right now at this moment”. But he added: “This could change.”

Dr Fauci, like most experts around the world, also advised against the public wearing masks. This was because the virus was still relatively unknown at the time and there was concern healthcare professionals would not have enough PPE in hospitals.

The recommendation on mask wearing was changed once it was determined the face shield could help deter the spread of the virus.

After attacking Dr Fauci for changing his advice on the pandemic, the president then, again, accused the infectious disease expert of being “a democrat”.

“I think he’s a Democrat but that’s OK. He is allowed to make mistakes,” the president said.

Dr Fauci is not registered to a political party. The epidemiologist has served under six presidents since Ronald Reagan as the director of the National Institute of Allergy and Infectious Diseases.

Given his position in government, Dr Fauci has prided himself of being “apolitical” in an effort to properly serve the public and whatever administration is in the White House.

“I do not, and nor will I ever, publicly endorse any political candidate,” Dr Fauci said in a recent interview with CNN.

Dr Fauci made the public statement after the Trump campaign used him in a political ad without his permission. In the ad, it looked as though the expert was politically endorsing Mr Trump and his administration’s efforts during the coronavirus pandemic.

“And here I am, they’re sticking me right in the middle of a campaign ad. Which I thought was outrageous,” Dr Fauci added. “I was referring to something entirely different. I was referring to the grueling work of the task force that, ‘God, we were knocking ourselves out seven days a week. I don’t think we could have possibly have done any more than that.’”