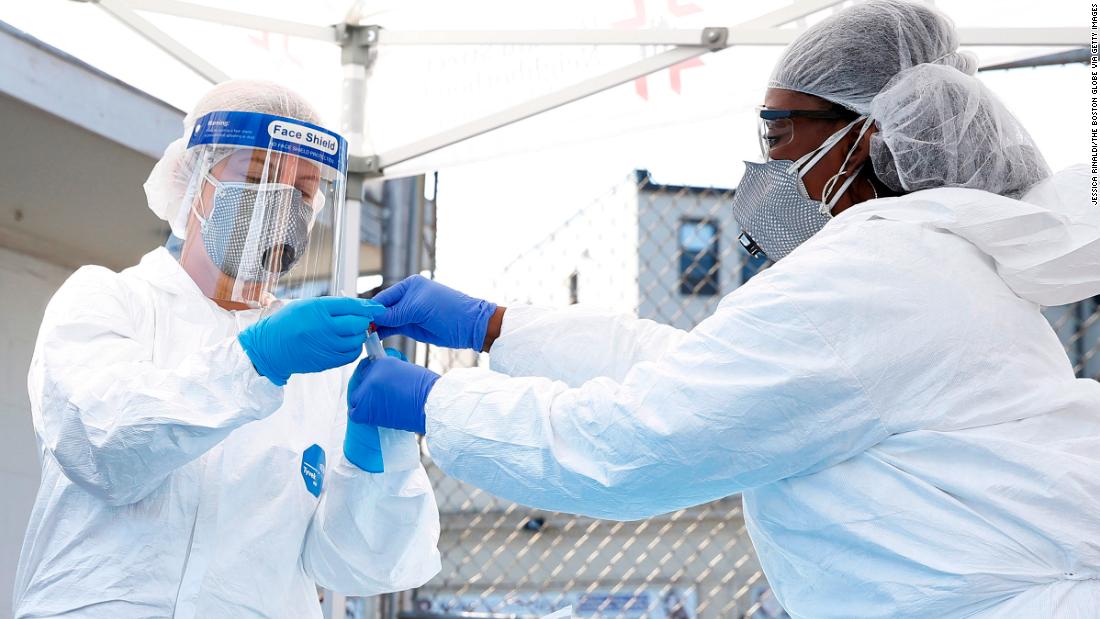 “We easily will hit six-figure numbers in terms of the number of cases,” Michael Osterholm, director of the Center for Infectious Disease Research and Policy at the University of Minnesota, told CNN Friday night. “And the deaths are going to go up precipitously in the next three to four weeks, following usually new cases by about two to three weeks.”

This comes as the country’s seven-day average of new daily cases surpassed 63,000 Friday — an 84% increase since the average started ticking back up in mid-September, according to Johns Hopkins University data.

Health officials say the steep inclines follow the reopening of schools and colleges across the US and have been largely driven by small gatherings — often family events — that are increasingly moving indoors, where the virus is likely to spread.

In Maryland, the governor said this week family gatherings were the No. 1 source of transmission in the state, followed by house parties. In North Carolina, health officials reported its highest daily case count Friday and said they continue to see clusters “from social and religious gatherings.”Unlike many European countries that are also experiencing spikes, the US never lowered its daily case baseline very far, meaning the compounding of cases could be worse, experts say.

And that’s ahead of several popular holidays, when health officials worry more Americans could let their guard down and opt to visit family and friends and further drive surges.

In North Dakota, with the highest per capita new case rate in the country, Gov. Doug Burgum called for a “Thanksgiving challenge,” urging residents to follow mitigation guidance like masks and social distancing to bring numbers down by the holiday.

“It would be really great to be sharing with all of you at Thanksgiving that our numbers are going down as we head into the holiday period,” he said Friday. “That we’ve got increasing amounts of hospital capacity. That our schools have remained open, that our businesses are open during that holiday season.”

The President has said in recent days the country is rounding the corner when it comes to the pandemic. But alarming patterns across the country tell a different story.

And more than 41,000 Covid-19 patients were in US hospitals Friday, according to the Covid Tracking Project. In Illinois, the number of hospitalized Covid-19 patients increased by at least 17% over the last week, the governor said Friday.

Illinois public health director Dr. Ngozi Ezike made an emotional appeal to residents on the importance of face coverings.

“As we see the numbers go up in the hospitals, people are bringing more beds, trying to prepare for the Covid units again. And these staff that went through all that pain to try to save as many people as they can are seeing history repeat itself,” she said. “We don’t have a vaccine yet, but we have a mask, and we’re asking people to use that, and I don’t know what else we can say.”

In Tennessee, hospital officials said new cases in metro Nashville have increased 50% in the last two weeks, and hospitals in the area saw a 40% increase in patients over the same time period.

And Colorado officials issued a new order limiting gatherings to 10 people from no more than two households in response to climbing infections and hospitalizations.

“We need to keep gatherings smaller and with people from fewer households — we are asking everyone to ‘shrink their bubble’ to reduce the spread,” Colorado Department of Health and Environment Executive Director Jill Hunsaker Ryan said in a Friday news release.

‘This is not a drill’

“They sound very simple, but we’re not uniformly doing that and that’s one of the reasons why we’re seeing these surges,” Dr. Anthony Fauci said Friday. “We can control them without shutting down the country.”

A new modeling study from the forecasting team at the University of Washington’s Institute for Health Metrics and Evaluation shows if 95% of Americans wore masks in public, more than 100,000 lives could be saved through February.But despite the forecast and experts’ warnings, face coverings remain a point of contention across the US. It just might be time for the country to mandate mask use, Fauci said.

“I think that would be a great idea to have everybody do it uniformly,” he said. “If people are not wearing masks, then maybe we should be mandating it,” he said.

“As I said it in February and I’m repeating it today, this is not a drill,” WHO Director-General Tedros Adhanom Ghebreyesus said in a news conference.

Expert: Vaccine may not come this year

While many experts and officials have worked to give hopeful estimates on when a Covid-19 will be available, that timeline remains uncertain.

But Collins added it was good news that the US has more than one vaccine candidate in development.

“If you were betting the whole thing on one vaccine, I’d be a lot more worried,” he said.

His remarks came the same day drugmakers AstraZeneca and Johnson & Johnson announced they were set to resume their paused Covid-19 vaccine trials in the US, both of which saw health scares in participants.

And when a vaccine does get approved, experts have said it’s crucial that enough Americans get it. If only half of the country is willing to get vaccinated, Collins warned, Covid-19 could stick around for years.

“When I look at the attitudes that are out there now about this vaccine, and about who would be interested in taking it — it’s really, really troubling,” Collins said at a National Press Club virtual event. “I’ve been talking so optimistically about how we are likely to have a vaccine by the end of the year, but if only 50% of Americans are interested in taking it, we’re never going to get to that point of immunity across the population where Covid-19 goes away.

Don't Miss it US COVID-19 deaths could hit 500,000 by February, researchers say | US & Canada
Up Next Devendra Fadnavis, BJP’s Bihar Poll Campaign In Charge, Has Coronavirus