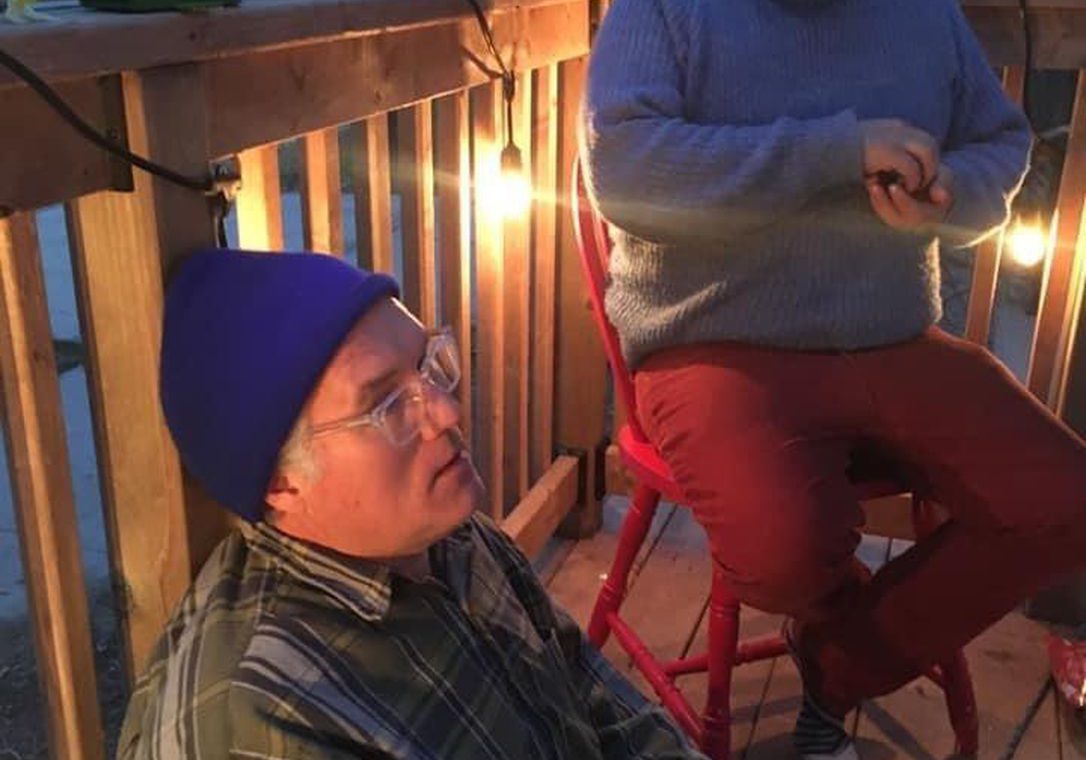 If anyone were to be the inspiration for a reboot of Oscar Wilde’s classic story “The Selfish Giant” it would be my friend Richard Vaughan. But the title would have to go. Yes, to fit his legacy properly, and to modernize it for the current climate, perhaps we could go with “The Selfless Giant,” or “The Gregarious Crafting Giant,” or “The Community-Building Giant”. Yeah, that might work all right.

When the police told my wife the news about finding Richard’s body on Friday, Oct. 23, she came into the garden and told me to go speak with him — the officer standing in our kitchen. He’d gone missing Oct. 13 and was found dead 10 days later. I didn’t want to talk to a stranger about someone who means more to me than almost anyone else in my life.

Richard Murray (RM) Vaughan, 55, was one of my closest friends, confidantes and collaborators. Two decades after I first met him, while growing up in Toronto publishing streams, Richard came home to New Brunswick in January, where I had been living for three years — when he was appointed Writer In Residence at the University of New Brunswick. It was a sort of CanLit relocation program and I was happy to see him. He was here only a short while when COVID-19 hit and he was booted from his digs in downtown Fredericton, so we asked him to live with us which, thankfully to us all, he did, on March 1. My wife, 11-year-old daughter, four cats and a new puppy were soon familiar with his hilarious personality, and his love of crafting — which would greet us in many forms every few days. Sometimes a collage would appear on my desk, left like a proud grade-school child bringing home work he’d made during art class.

After receiving his Bachelor of Arts Degree and his Masters of Arts in English from the University of New Brunswick, Vaughan moved to Toronto and became a fixture in the city’s art and literary scene in the ’90s and 2000s, working in visual art (video, performance, collage) as well as being a regular arts columnist and critic for newspapers and magazines. He’s a board member of This Magazine, and has a large section of filing cabinets at the Gay/Lesbian archives just teeming with his work. (He took me there once).

His recent projects included editing a collection of Queer poetry by New Brunswick writers with Frog Hollow Press, and he had recently published a chapbook called “Contemporary Art Hates You,” with Anstruther Press .

His vast bibliography includes poetry collections “A Selection of Dazzling Scarves,” “Invisible to Predators,” “Ruined Stars,” “Troubled” and “Ve1Xe”; the novels “Quilted Heart” and “Spells;” the play “Camera, Woman” and “The Monster Trilogy;” and “Compared to Hitler: Selected Essays,” which came out in 2013.

He was taught by his mother to be a kind and well-mannered Maritime boy. Young man. He once cancelled a sushi date with me because he had to interview Freddy Krueger actor Robert Englund — oh, the laugh we had because he was ditching me to talk to Freddy Krueger. Always there were the laughs, and the anecdotes. They helped define our friendship, as they did with so many others — the amount of personal mail he receives every week from friends across Canada and beyond, attest to his ability to keep in touch, to draw people towards him, and his dedication and pride towards those he loved, dated, admired and collaborated with.

When he wasn’t working on his poetry, his novel, or writing his widely loved columns and articles, he was in our large lovely garden, nurturing life, planting seeds and proudly watering his towering sunflowers. He also grew potatoes for the first time this summer, and shared his bounty with us. More than once a day his phone alarm would sound off and he’d be off to talk to one of his many friends across the world on Skype. He treasured he connections to “my gays” as he’d call them affectionately. We were his “straights.”

When a television reporter came to talk to me, reporting on his death, they cut out what I felt was more important than what he meant to me personally: I talked about his impact on the Queer creatives who were so oppressed when he came of age in the 1980s and ’90s; how important his work and advocacy was to their empowerment, how the mainstreaming of Queer culture is because of the efforts of icons like him.

He’s like Andy Warhol and Douglas Coupland, Truman Capote and Kathy Acker all in one, with just the right amount of his fave actress, Jodie Foster. Richard was a true pioneer and made a joke of being what he called the “token gay” — “We need a gay? Let’s get Richard!” — but it really meant he was always in demand.

He carried an undercurrent of sadness — about his mother’s death in 2015; the abuse he faced as a child from his father for being chubby; for being different — that sometimes clouded our bonfire conversations. He would drift away, only to recover again quickly, picking up another train of thought, making us laugh again. His gregarious personality created a curtain for his pain; his heart was big, he connected people. “You should talk to …” he’d say. “I’ll introduce you.”

Our writing community is full of hot-heads and saints, egoists and divas. But it’s changing, becoming filled with influencers and those without experience.

Last week saw both the retirement of beloved Brick Books publisher Kitty Lewis and the announcement that Pedlar Press will end this year.

In an interview, Pedlar founder Beth Follett talked of her fears of leaving the publishing world in the hands of those who don’t know. “There’s a lot of expertise in the small-press world and if there aren’t excellent succession plans getting worked up then it could be really dicey in a couple more years,” she told Quill and Quire recently.

RM Vaughan’s death is that kind of loss. Who can possibly replace him, his ability to make everyone feel welcome, loved, curious about the world of creative types around them, all the while making them spit their drinks out from laughter. You can’t go to charm school to learn any of that.

When Richard first went missing I prayed we’d find him. He’d been suffering bouts of isolation, sometimes staying in his apartment downstairs for four days straight, not even leaving to check the mail. I prayed he was holed up in a motel with a cute boy and some weed and was just taking a break.

I dreamt recently that I found him with cuts on his body. Again I thought of Wilde’s story, the part where the Giant finds a little child he had loved standing in his garden, with his wounds of crucifixion, and the child says “These are the wounds of Love.”

I hope Richard is in his garden, in Paradise, covered in white blossoms. I pray that, like the boy in Wilde’s story, his wounds were the wounds of Love.

Nathaniel G. Moore is a Fredericton artist and writer.