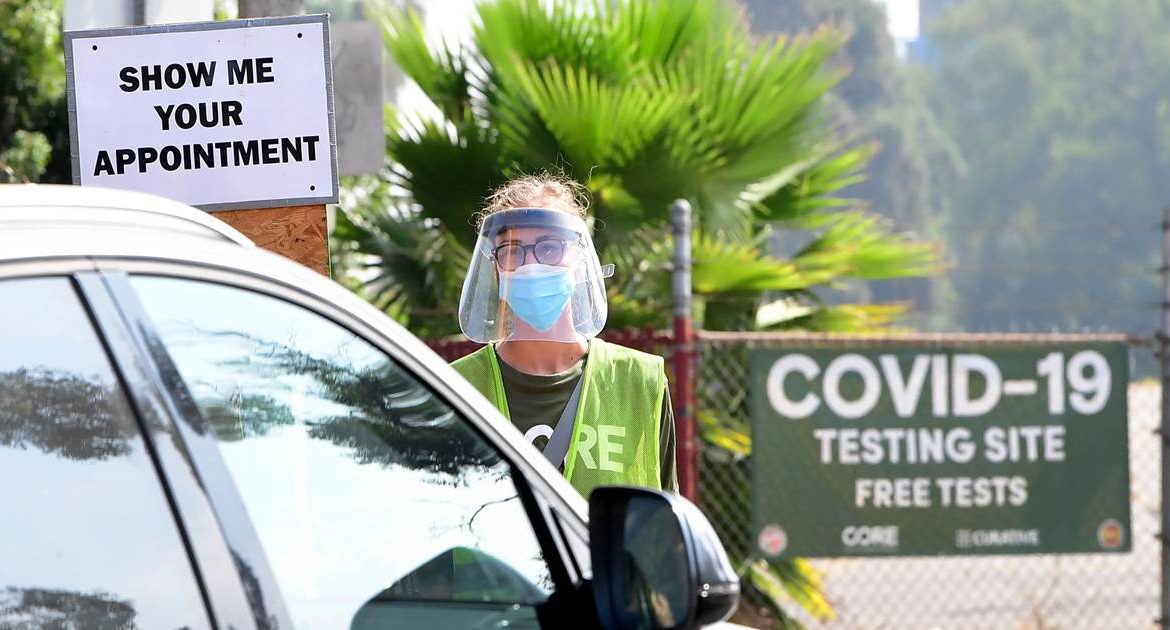 Covid-19 infections are spreading across the United States at the fastest rate since the start of the pandemic, the latest NBC News figures showed Tuesday.

The 71,000 new cases per day that the U.S. averaged over the past week was the most in any seven-day stretch since the crisis started and stood in stark contrast to President Donald Trump’s repeated claims that “we are rounding the turn” on the pandemic.

And no part of the country has gone untouched by this latest surge in new coronavirus cases.

Wyoming, which had relatively few cases until recently, reported a 475 percent spike in Covid-19 deaths in the last 14 days, the numbers showed. Nine deaths were reported Monday in Wyoming, boosting the state’s total number of coronavirus fatalities to 77, the NBC numbers showed. Of those, five were elderly residents of a long-term care facility in Big Horn County, the Wyoming Department of Health reported. Also on Monday, the state set a single day record for new cases for the second time in less than a week, with 436.

Those numbers are tiny compared to Texas and California, which have the most cases in the country, but Wyoming with 579,000 residents is the nation’s least populated state.

Dr. J.J. Bleicher, the interim head of the Wyoming Medical Center, told The Casper Star-Tribune that they were bracing for an “exponential” growth in the number of critically ill Covid-19 patients.

In other coronavirus news:In a sign of just how many Americans have been touched by the pandemic, a majority of adults reported that they know at least one person who has been diagnosed with Covid-19, according to new data from the NBC News|SurveyMonkey Weekly Tracking Poll.Writing to her fellow Democrats, House Majority Leader Nancy Pelosi signaled there is unlikely to be a new Covid-19 relief bill before Election Day next Tuesday and ripped Trump and his team for that failure. “From ‘hoax’ to hundreds of thousands dead, the White House has failed miserably – not by accident, but by decision,” she wrote.The National Institute of Allergy and Infectious Diseases is ending a study testing an Eli Lilly antibody drug for people hospitalized with Covid-19 because it doesn’t seem to help them. President Donald Trump received a similar experimental drug when he was sickened with the coronavirus this month.Making her first solo appearance on the campaign trail, First Lady Melania Trump told supporters in Pennsylvania she and the president were feeling “so much better now thanks to healthy living and some of the amazing therapeutic options available in our country.”The pandemic has spawned another health crisis: Elderly residents trapped by the virus in nursing homes are dying from isolation, NBC News reported.A former Omaha, Nebraska TV meteorologist and mayoral spokesman was sentenced to two years probation for threatening to slit the throat of a local heath director who had imposed Covid-19 restrictions on the city, The Omaha World-Herald reported.

With the presidential election now just a week away and Trump’s re-election chances imperiled by his administration’s much-criticized performance during the pandemic, the U.S. led the world in the number of Covid-19 cases with 8.8 million and nearly 227,000 deaths from the virus, according to the Johns Hopkins University Covid-19 dashboard.

Pennsylvania, a must-win state for Trump where polls show Democratic challenger Joe Biden in the lead, reported a record daily high of 2,751 new cases on Monday along with 23 deaths from Covid-19.

Wisconsin, another key state that Trump needs to win, also set a new daily record for both infections (5,262) and deaths (64), state health officials reported. And it reported a 25.7 percent Covid-19 testing positivity rate, one of the highest in the country.

The World Health Organization advises governments to maintain a testing positivity rate of 5 percent or lower for 14 days before reopening.

Trump dismissed any criticism of his administration’s pandemic performance.

“Voters are judging me on a lot of things, and one of the things we’ve done a really good job on is Covid,” the president said before taking off from a campaign event.

An average of 671 people died in the U.S. per day during the seven day period ending Monday, NBC News figures showed.

That’s a much lower death toll from the high of 2,803 fatalities-per-day recorded in April, when U.S. health officials were still trying to understand how the virus was spreading and scrambling to find enough ventilators and hospital beds to treat critically ill patients.

It was during this period that states like New York, which continues to lead the nation with 34,341 deaths, recorded most of its Covid-19 fatalities.

States like Texas (18,081 deaths) and Florida (16,652 deaths) recorded the bulk of their Covid-19 deaths after they started lifting their lockdowns in May, at the urging of Trump and to the dismay of public health experts, NBC News statistics have shown.

While Europe has been grappling with a second wave of Covid-19 infections that has forced countries like France, Spain, Germany, Italy and Poland to re-impose lockdowns and other restrictions aimed at curbing the spread, public health experts in the U.S. said the nation never made it out of the first wave.

“I look at it more as an elongated exacerbation of the original first wave,” Dr. Anthony Fauci, director of the National Institute for Allergy and Infectious Diseases, said Monday at a Yahoo Finance forum. “It’s kind of semantics. You want to call it the third wave or an extended first wave, no matter how you look at it, it’s not good news.”

With the weather getting colder and more people heading indoors where infections spread easier, Fauci and other infectious disease experts have been pleading with Americans to keep wearing masks and to social distance as much as possible.

Trump, however, continues to undermine that message by refusing to mask-up, even after he and first lady Melania Trump contracted Covid-19 themselves.

Neither was wearing a mask at Monday’s late night ceremony on the South Lawn of the White House to swear in new Supreme Court Justice Amy Coney Barrett, The New York Times reported. And neither did Barrett, who has also recovered from a coronavirus infection.

Other guests at the event were required to wear masks and social distance in an attempt by the White House to prevent Monday’s bash from turning into another “superspreader event” like last month’s Rose Garden ceremony when Barrett was officially introduced.

Nigel Chiwaya is a deputy data editor for NBC News.