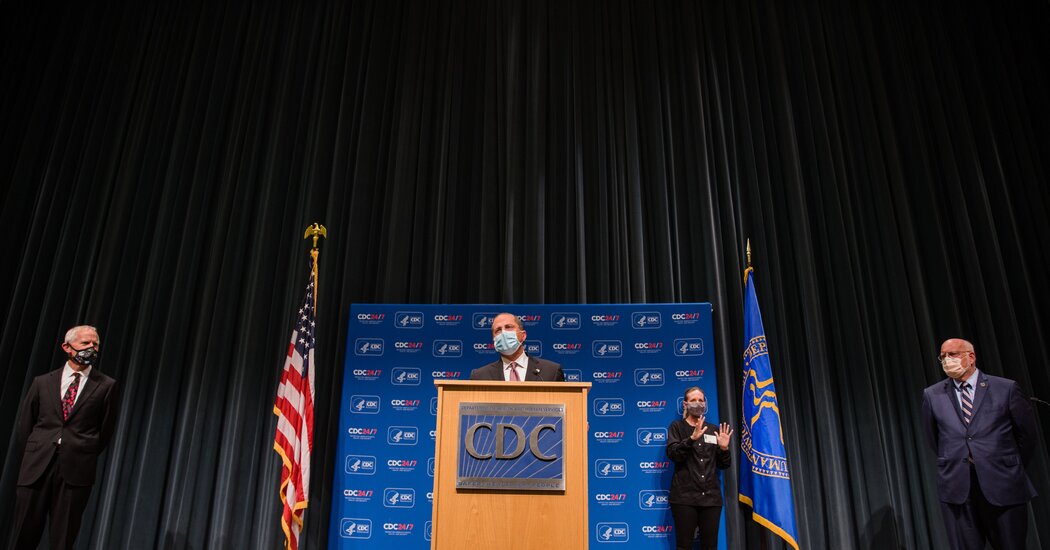 WASHINGTON — A $265 million public campaign to “defeat despair” around the coronavirus was planned partly around the politically tinged theme that “helping the president will help the country,” according to documents released on Thursday by House investigators.

Michael R. Caputo, the assistant secretary for public affairs at the Department of Health and Human Services, and others involved envisioned a star-studded campaign to lift American spirits, but the lawmakers said they sought to exclude celebrities who had supported gay rights or same-sex marriage or who had publicly disparaged President Trump. The actor Zach Galifianakis, for instance, was apparently passed over because he had declined to have Mr. Trump on his talk show “Between Two Ferns.” (Mr. Galifianakis did have President Barack Obama on the irreverent show.)

Ultimately, the campaign collapsed in late September amid recriminations and investigation.

Democrats on the House Oversight and Reform Committee and the select subcommittee on the coronavirus crisis released the records, declaring that “these documents include extremely troubling revelations.” They accused Alex M. Azar II, the secretary of health and human services, of “a cover-up to conceal the Trump administration’s misuse of hundreds of millions of taxpayer dollars for partisan political purposes ahead of the upcoming election.”

Mr. Caputo, a fierce ally of Mr. Trump, had drawn attention to the public relations campaign last month during an extended rant on Facebook, claiming that the president had personally put him in charge of the project and that career government scientists were engaging in “sedition” to undermine the president. He is on medical leave battling cancer.

That public relations effort is now in shambles. The celebrities picked to promote the campaign, including the actor Dennis Quaid, have pulled out. Mr. Azar ordered a review of whether the initiative served “important public health purposes.” Top health department officials have privately tried to distance themselves from the project.

“The plan has always been to only use materials reviewed by a departmentwide team of experts,” a department spokeswoman said in a statement.

The new documents indicate that Mr. Quaid stood out mainly because he got through the vetting. Documents show contractors involved in the public relations effort researched the political views and backgrounds of at least 274 celebrities in what appeared to be an effort to root out anti-Trump sentiment that could inflect the initiative.

Mr. Galifianakis “refused to host President Trump on talk show,” one notation reads. Bryan Cranston, the antihero of the television program “Breaking Bad,” “called out Trump’s attacks on journalists during his Tony Awards speech in 2019.” The actor Jack Black was “known to be a classic Hollywood liberal.”

Dakota Johnson, the actress, once “wore a pin to support Planned Parenthood.” And Sarah Jessica Parker, the actress, was tagged as an “L.G.B.T.Q. supporter including marriage equality.”

In the end, only 10 of hundreds of potential celebrities considered for the campaign were approved, the documents suggest.

The new documents deal with a $15 million contract awarded to Atlas Research and signed in late August. They indicate that government officials successfully urged the company to hire three little-known subcontractors with no obvious expertise to join the bigger campaign.

When Mark H. Chichester, the president of Atlas, tried to research those subcontractors, he discovered “small shops with little on them in the public domain,” according to documents the committee released.

One was a one-person operation run by a state-level Republican pollster, Mr. Chichester wrote. Another appeared to be “a small — perhaps one-man” operation.

A third was a “platform owned by Den Tolmor, a Russian-born business associate of Caputo’s,” Mr. Chichester said.

In a September meeting with one subcontractor, Mr. Caputo suggested “taglines” for the effort, some of which had a distinctly partisan tone, such as “helping the president will help the country,” according to notes released by the lawmakers. Mr. Caputo said that theme “would appeal to his base in terms of wearing a mask, vaccine,” the notes state.

Mr. Caputo appeared to be trying to shore up support from Mr. Trump’s followers who might be skeptical of wearing masks or getting a vaccine by linking those activities with supporting the president. The main contractor, Atlas Research, could not be immediately reached for comment. A person familiar with Mr. Caputo’s version of events, who spoke on the condition of anonymity, said Mr. Caputo was never in business with Mr. Tolmor, the subcontractor, and did not try to improperly intervene in the contracting process.

But in a 2018 news release and in at least two media reports that year, Mr. Caputo was described as the chief marketing officer for a film and video streaming company co-founded by Mr. Tolmor. And the documents released by congressional investigators suggest that contract officials with the Food and Drug Administration, a part of the Department of Health and Human Services, were so concerned about Mr. Caputo’s involvement in the process that one removed him from an email chain and warned Atlas executives that only contract officers could advise the company about how to fulfill its government obligations.

The public relations campaign became politically toxic even to those who signed up for it. Mr. Quaid recently backed out after recording an interview with Dr. Anthony S. Fauci, the government’s top infectious disease expert, saying in an Instagram post that his role was not an endorsement of Mr. Trump, and that he was “feeling some outrage and a lot of disappointment” after public reports on the campaign. The singer CeCe Winans also dropped out.

Democratic lawmakers have questioned the campaign’s funding after Dr. Robert R. Redfield, the director of the Centers for Disease Control and Prevention, testified in September that $300 million had been steered from his agency’s budget to Mr. Caputo’s office, and that the C.D.C. was given no role in the campaign, which aimed to “defeat despair.”

The federal government awarded the campaign’s biggest contract to the Fors Marsh Group, a research company in Northern Virginia. A department official said the award, for $250 million, was competitively bid and Mr. Caputo had “nothing to do” with it.

On Sunday, The Wall Street Journal reported that as part of that same campaign, Mr. Caputo had offered early access to a coronavirus vaccine to a group of performers who play Santa Claus, Mrs. Claus and elves. In recordings obtained by The Journal, Mr. Caputo said that the campaign would feature regional events with “beautiful educational films,” and that the Santas would participate in dozens of cities. Health department officials said the Santa plan was discarded. Mr. Caputo also did not have the power to grant special access to a vaccine.

In their letter dated Wednesday, the Democrats scolded Mr. Azar for not turning over contract documents, including those related to Atlas. They wrote that it was “completely inappropriate to frame a taxpayer-funded ad campaign around ‘helping’ President Trump in the weeks and days before the election.”

The letter was signed by three committee leaders: Representatives Carolyn B. Maloney of New York, James E. Clyburn of South Carolina and Raja Krishnamoorthi of Illinois.

Mr. Caputo was especially aggressive in putting the president’s sanguine spin on the pandemic. He and a onetime adviser he hired at the department, Dr. Paul Alexander, repeatedly tried to interfere with weekly bulletins published by the C.D.C. about the latest research on the pandemic, lashing out at career officials for perceived opposition to Mr. Trump. Mr. Caputo asked C.D.C. officials for the names of the authors of the reports in an attempt to locate potential anti-Trump political bias in their biographies, according to two former senior health officials.

Don't Miss it Coronavirus: Latest developments in the Greater Toronto Area on Oct. 29
Up Next Coronavirus: What next as UK deaths rise and cases surge? – BBC Newsnight