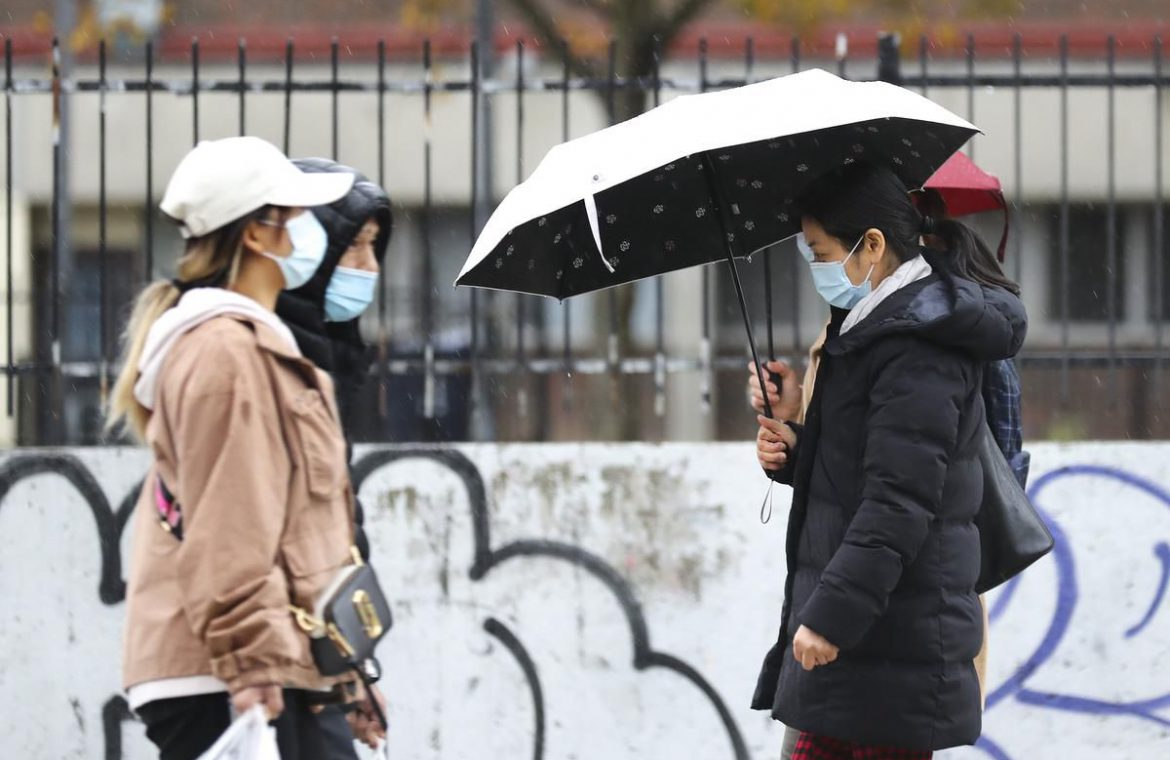 With new COVID-19 infections in Ontario now averaging over 900 per day, new data analysis shows your chances of encountering someone infected with the virus in groups of 50 is now more than 25 per cent in 42 Toronto neighbourhoods, up from 16 just three weeks ago.

The analysis, by Ryan Imgrund, a biostatistician with Southlake Regional Health Centre, also shows that the odds of coming into contact with the new coronavirus in that sized group is more than 50 per cent — one in two — in four areas of the city.

The data, which provides neighbourhood risk figures for the time period of Oct. 14 to Oct. 25, also shows the chance of encountering someone with the virus in groups of 100 was 25 per cent or more in 84 neighbourhoods, up from 66 three weeks ago.

“I think it shows that so far the Stage 2 rollback hasn’t been effective,” said Imgrund, who is also a high-school science teacher and has worked for the Public Health Agency of Canada. “I expected to see a plateau at worst. Instead, we have seen a sharper than expected increase given the move back to modified Stage 2.”

However, at a press conference Friday to announce millions of dollars in funding for two Etobicoke schools, Premier Doug Ford said he’s asked public health experts to come up with a plan next week to “ease restrictions in a way that safely allows businesses to start opening back up after the 28-day period is over.”

The premier said “based on the evidence I’m seeing, the measures we had to take on (Oct. 10) have had an effect.”

The modified Stage 2 measures included a ban on indoor dining and fitness classes in gyms, as well as closing cinemas and limiting gatherings to 10 people indoors and 25 people outdoors. Toronto, Peel and Ottawa were the first to enter the modified restrictions, followed a week later by York Region.

At Friday’s press conference, Dr. Barbara Yaffe, the province’s associate chief medical officer of health, said that before the modified Stage 2 restrictions, around 30 to 40 per cent of COVID-19 cases in Toronto and Ottawa were coming from bars in restaurants. That proportion is now down to around 14 per cent in Toronto, said Yaffe.

Overall, cases are still going up, but “they’re going up slower,” she said. “So what it’s saying to us is we can look at perhaps modifying the conditions.”

The province put a pause on 10-person social bubbles at the beginning of October, when it mandated masks in indoor spaces, when two-metre physical distancing isn’t possible, throughout the province.

To calculate the risk percentages, Imgrund uses case data by postal code released by the city of Toronto every week. He assumes that the virus is transmissible for a period of 12 days and takes into account the fact that people can transmit COVID-19 before and after the onset of symptoms.

He also accounts for the population of each neighbourhood and uses seroprevalence figures from Public Health Ontario, which is testing for antibodies specific to COVID-19 in blood samples to determine the proportion of the population that has been infected.

“What I’m looking at here is the cases that are able to be transmitted to other people,” he said. “There are some fancy math tricks that need to be done to account for data cleaning, reporting lags and also future growth of cases, but they’re just really fancy math tricks that are utilizing the data that is already out there that Toronto releases.”

Imgrund noted that his risk calculations represent a snapshot in time going back 12 days. That means neighbourhoods in which people have higher odds of encountering someone with COVID-19 this week may not be the same next week.

Chris Bauch, a professor of applied mathematics at the University of Waterloo, points out that, although the data calculates the probability that someone could encounter a person with COVID-19 in their neighbourhood, it is not a transmission model, and it doesn’t show a person’s chances of becoming infected through that encounter.

He said that, in neighbourhoods where the risk of an encounter is higher according to Imgrund’s calculations, individuals can reduce their chance of transmission if they are “diligent about mask use, physical distancing, handwashing and remaining in small (social) bubbles that don’t have members who are also parts of other bubbles.”

“The smaller the bubble, the better,” Bauch said.

But he cautioned, “If cases start to climb (as they will), the chances of encountering someone, even in smaller groups, will start to increase.”

Don't Miss it Coronavirus rates show 13 hotspots where cases rising rapidly – and none are in Tier 3
Up Next Trevor Lawrence coronavirus diagnosis — Timeline, Clemson’s backup QB and more