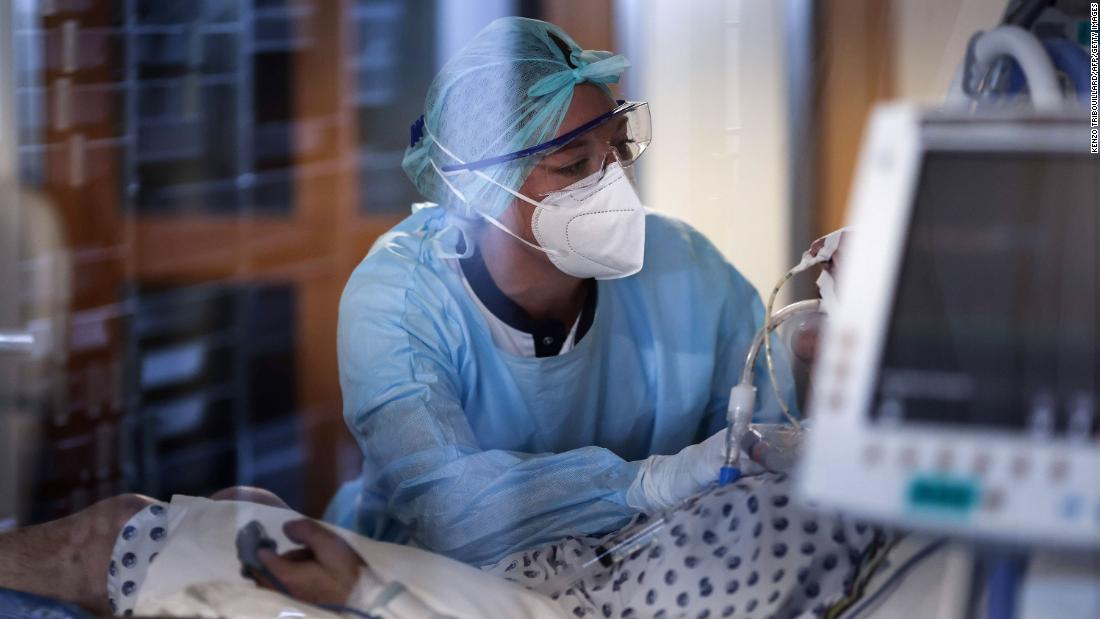 A scientific adviser to the British government warned Saturday that the pandemic is “running riot” in the UK, demonstrations against new Covid-19 measures have turned violent in Spain and Italy, while Germany has reported a record number of cases for the fourth day in a row.

British Prime Minister Boris Johnson could announce a new lockdown for England at a Monday news conference, according to senior sources quoted by UK newspaper The Times. A UK government adviser, who asked not to be named, told CNN the reports were true.

The measures, which include closing everything except for essential shops and schools, would go in place as soon as Wednesday, The Times reported.

Johnson has previously said he wants to “avoid the misery of another lockdown,” but he hasn’t ruled it out.

Calum Semple, a member of the government’s Scientific Advisory Group for Emergencies (SAGE) and a consultant respiratory pediatrician, said tighter restrictions were needed to slow the spread of the virus.

“It’s a slightly slower growth than in the spring, but like a super tanker, it’s really moving now,” he told BBC Radio 4 on Saturday.

Semple said there were many more cases, particularly in younger women between the ages of 20 and 40, “because they’re exposed in retail, hospitality and some educational settings.”

“Unlike the first wave where we had a national lockdown which protected huge swathes of society, this outbreak is now running riot across all age groups.”

Top scientists have been warning for weeks that another lockdown would be needed in England instead of the current localized “tier” system.

“We’ve tried the softer approaches, and they’re not working as fast as we’d like them to,” University of Leicester virologist Julian Tang told CNN. “And now the virus has spread and seeded a lot more than expected, even in the worst-case scenarios.”

He said it was “not surprising” after the growth in case numbers seen following the relaxation of restrictions in Europe at the end of summer.

Jeremy Farrar, director of the Wellcome Trust, said on Twitter that the UK had “surpassed the ‘reasonable worst-case scenario,'” outlined by government scientists in September, with the country’s reproduction rate (R number) well above 1, indicating the virus is spreading. “The best time to act was a month ago but these are very tough decisions which we would all like to avoid. The second-best time is now,” he wrote.

Protests against new Covid-19 measures turned violent in Spain on Friday night as hundreds of demonstrators took to the streets, according to multiple Spanish media outlets.

At least 12 people, including two minors, were detained after “serious riots” erupted in the northeastern region of Catalonia in Spain, according to Catalonia’s Ministry of Interior.

On Friday, the Catalonia region became one of at least 10 regions to close its borders to help fight Spain’s second wave of Covid-19. The existing closure of bars and restaurants in Catalonia has been extended for another 15 days, with shopping centers, cinemas, theatres, and gyms now ordered to close as well.

There were disturbances in several other cities on Friday night, including Burgos and Santander.

Violent protests also erupted in Italy this week as cases hit a new daily record of more than 31,000 in 24 hours, according to figures released by the country’s health ministry on Friday.

Hundreds of protesters gathered in the historic center of Florence and clashed with the police on Friday night, the Florence police press office told CNN on Saturday.

Numerous Italian regions are facing “critical risk,” according to a joint report by the Italian Health Ministry and Italian Health Institute released on Friday.

Lombardy — the worst hit during the pandemic — and Campania, the second most affected region, are among the 11 regions classified as at “high risk” of Covid-19 transmission.

Germany reported a record number of coronavirus cases for a fourth day in a row on Saturday with 19,059 new infections in 24 hours, according to the country’s disease control agency, the Robert Koch Institute (RKI).

Germany will impose wide-ranging lockdown measures from Monday in an attempt to slow down the spread of the coronavirus, its government decided on Wednesday night. Bars, restaurants and cafes will remain shut except for takeout. Theaters and concert halls will be closed, as will amateur and recreational sports facilities.

Belgium, which is to send patients to Germany for treatment as hospital admissions soar, will impose sweeping new lockdown measures for six weeks starting Sunday night.

Belgium has the second highest number of infections per 100,000 people in the European Union and UK, after the Czech Republic.

“We are going back into a strict lockdown, which has only one purpose: to ensure that our healthcare system does not collapse,” said Belgian Prime Minister Alexander De Croo as he announced the restrictions on Friday.

The measures include the closure of non-essential stores, hair salons and restaurants; mandatory mask-wearing for outdoor gatherings of up to four people and a ban on mixing indoors except with a “cuddle contact,” or person in a support bubble. The rules will be place until December 13. Schools will remain on vacation until November 15.

“We have to limit our physical contacts as much as possible,” said De Croo, adding that this was Belgium’s “last chance if we want to bring this curve down.”

France entered a second national lockdown on Friday that will last an initial four weeks, until December 1 at “minimum.” The rules will be more relaxed than during spring’s lockdown, with school and workplaces remaining open.

However, people will only be allowed outside “to work, to go to a medical appointment, to care for a relative, to shop for essential goods and to get some air,” said French President Emmanuel Macron.

“The virus is circulating at a speed that even the most pessimistic had not predicted,” Macron added.

A curfew that had been imposed in Paris and other cities had no impact on the spread of the virus, according to Macron.

Parks, gardens, and open-air markets will stay open but movement between regions will be forbidden.

Macron acknowledged the “huge effort” required by businesses forced to close, and said that “15 days from now, we will re-evaluate the situation” and “reopen some if the situation allows.”

Greece has also expanded its containment measures from high-risk areas to the whole country. In a televised address on Saturday, Prime Minister Kyriakos Mitsotakis outlined a series of measures for the whole country that will take effect on Tuesday November 3 and last for a month.

There will be a night-time curfew from midnight to 5 a.m., mask use will be mandatory everywhere, and more people will be encouraged to work from home.

The number of coronavirus cases in Europe since the beginning of the pandemic has exceeded the 10 million mark, with more than 1.5 million cases confirmed last week, World Health Organization’s Europe director Hans Kluge on Thursday.

During a meeting with European Health Ministers, Kluge said hospitalizations had risen to “levels unseen since the spring,” with deaths rising by 32% across the region last week.

“Europe is at the epicenter of this pandemic once again,” Kluge said.

“At the risk of sounding alarmist, I must express our very real concern and convey our steadfast commitment to stand beside you and support you as best we can.”

Kluge said lockdowns “need not mean what they meant in March or April” and that indirect economic impacts must be considered.

But for much of Europe, this new phase of lockdown looks set to be even harder than what came before.