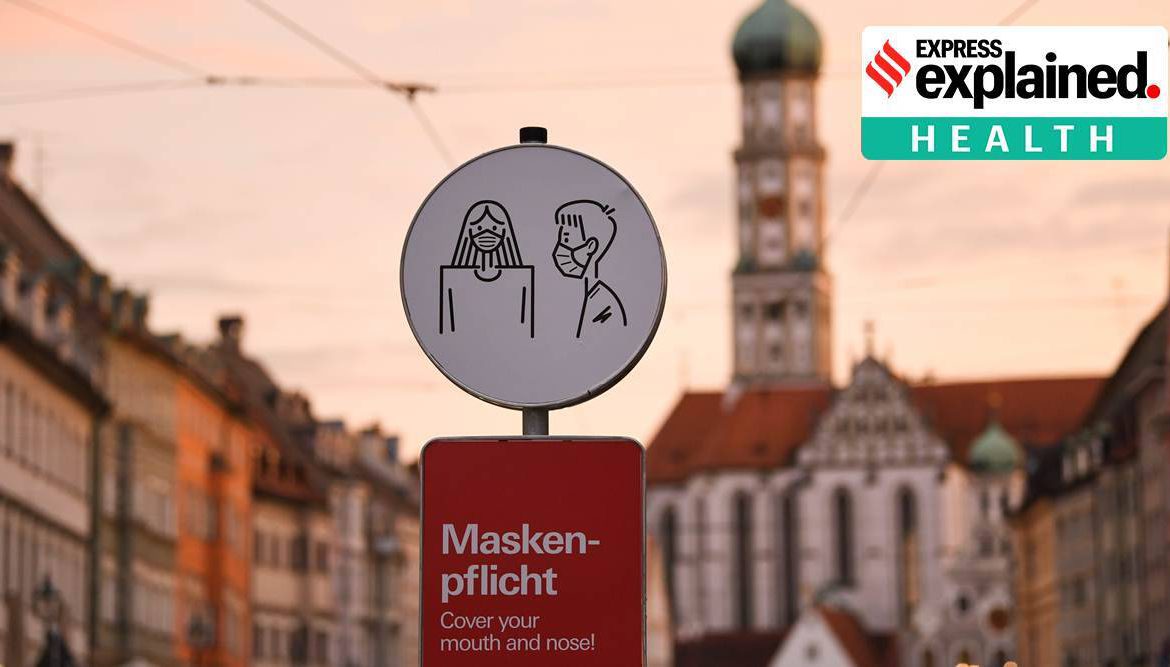 A sign that reminds people how to wear a face mask correctly is seen, amidst the spread of the coronavirus disease (COVID-19) In Augsburg, Germany, October 30, 2020. (Reuters/Andreas Gebert)

In the months of March, April and May, Europe as a whole reported between 35,000 and 38,000 Covid-19 cases every day, at its peak. The numbers steadily declined after that as the United States, and, later, India emerged as the epicentres of the epidemic. For most of June, July, and even August, Europe reported less than 20,000 cases a day, almost a third or fourth of what India alone was reporting.

In the last one month, however, there has been a dramatic rise in cases in Europe. The second wave of infections in Europe is far worse than the first. On Thursday, Europe reported more than 2.5 lakh cases in a single day, according to the database maintained by the website ourworldindata.org.

The US, which has had a slightly different trajectory than Europe, too is in the midst of a second wave. Daily numbers in the US have mostly been over 30,000 since June, but in August and September, it was significantly lower than the 50,000-60,000 it was reporting at its peak. In the current wave, the number of daily new cases has already crossed 88,000.

While there could be a variety of reasons behind this renewed surge in Europe and the US, experts point to two possible broad factors: a general lowering of guard after the numbers began to dip in the summer, and the drop in temperature that would be pushing most activities indoors. The cold, dry weather could also be helping the virus survive longer and remain potent, though the evidence on that is not conclusive.

“Europe does seem to have got a bit relaxed in June and July, once the numbers began to come down. People started travelling extensively, even for leisure. And this has contributed to the surge that we are seeing now. This is what we need to learn about this disease, and need to guard against. The virus has not gone anywhere, even when the numbers decline,” said Shahid Jameel, Director, Trivedi School of Biosciences at Ashoka University.

Spain, for example, received 2.5 million visitors in July, after practically no international tourists in March, April and May.

Gagandeep Kang, professor at Christian Medical College, Vellore made the same assessment. “We are coming out of a time when most of Europe was on a holiday, and had started travelling… within Europe, but still, travelling. In the United States, school holidays ended around the end of August, and colleges started to function. We are two months from all those events, and for the virus to multiply, it takes a bit of time, there is a lag. So, this surge is not entirely unexpected,” she said. “What is a bit surprising is that one would have expected these populations, which are considered to generally more aware, to have done a better job at doing the non-pharmaceutical interventions to control the epidemic, but that clearly does not seem to have happened.”

Both Kang and Jameel also underlined the possible role of the change in weather.

“As the temperatures go down, more and more people remain indoors. Transmission of the virus becomes much more effective in these settings. So, while the virus was always present, the effectiveness of transmission is likely to have increased when people interact mostly in closed spaces. There are studies that have shown that the probability of infection increases during interactions in closed spaces,” Jameel said.

Jameel said Australia could avoid a major surge during the southern hemisphere winter because of much better compliance with wearing masks. “In fact, this year, there has been a significant decline in cases of flu in Australia, because people have been wearing masks. Also, the population density is much lower, and the Australian winter happened, when people were still very afraid of the virus, and the fatigue had not set in,” he said.

Kang said while the winters had forced people indoors, their interactions had not declined. “It is not as if people are isolated at home. As is usual during this time, the activities shift indoors in winters… And in places which are small and the ventilation is not good, the chances of the virus sticking around and infecting people, is much more,” she said. ? Express Explained is now on Telegram

A new study, published on Thursday on a pre-print server (yet to be peer-reviewed), suggests that travel within Europe, particularly Spain, could be spreading the virus. It reports that a new variant of the virus, first detected amongst people in Spain in July, has now spread through many countries in the region. Named 20A.EU1, this variant is particularly prevalent in the UK, Switzerland, the Netherlands, France and Norway. It accounts for the majority of the recent infections in Europe, and “was dispersed across Europe by travellers to and from Spain”.

However, the study also says there was no direct evidence to suggest that this new variant spread faster than others, or that it resulted in more serious disease. In effect, while the new variant is becoming dominant, it is not yet clear whether it is also leading to the rapid rise in numbers.

In India, the number of daily new cases touched a peak in the middle of September, and has been declining ever since. On September 16, India detected 97,894 new cases, the highest for any country in a day. Currently between 45,000 and 50,000 new cases are being detected.

But states like Delhi and Kerala are already witnessing a fresh wave of infections. In fact, Delhi is going through a third wave now, having seen two cycles of peaks and declines earlier — each peak higher than the previous one.

Whether India will also go through a Europe-like resurgence during the winters cannot be predicted. Experts have been warning of the risk in the festival season and the approaching winter when air pollution too is high. The impact of Dussehra, if any, and the Bihar elections might become evident only after a few weeks.

But Kang said there were also other differences between the situations in India and Europe. “In Europe and some other parts of the world, a lot of human activities are driven by the season, and the prevailing climate. In most parts of India, the weather changes are not that extreme to force significant behaviour changes… Now, whether that would protect us in some way is something we can only wait and see, but it is certainly plausible,” she said.