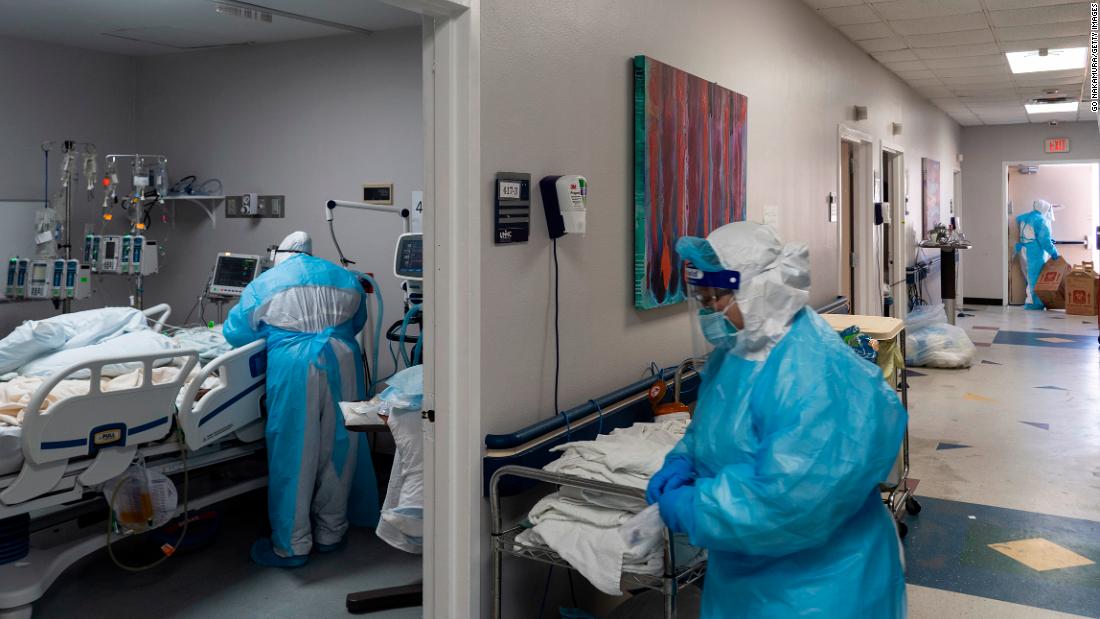 The country’s seven-day average of new daily cases was 78,380 Saturday — a number that has risen 128.2% since a post-summer-surge low on September 12. With any potential vaccine still a ways off from possible distribution, and the colder months threatening to increase spread, experts emphasize more people need to regularly take precautions to stem the rise anytime soon.

“It’s the way we protect our neighbors and our communities. And we need to avoid crowds. We have to socially distance. You can’t go to a mass gathering now. We need to lower our viral footprint,” Dr. Jonathan Reiner, professor of medicine at George Washington University, told CNN on Saturday.

October was unprecedented for several recorded metrics associated with the pandemic.

Of the country’s seven highest daily tallies of new cases, six were in October. The highest — 99,321 recorded on Friday — was the most recorded in one day for any one nation so far.

The number of US Covid-19 patients in hospitals on Saturday, October’s last day, was 47,374 — 65.6% higher than it was on September 20, when it was at a low following the summer surge.

And Reiner said there is no sign that the number of daily cases will drop soon.

“We won’t peak until we change our behaviors. And our behaviors that principally need to change are our lack of masking all over the country,” he said.

The country has recorded more than 9.1 million infections and 230,548 deaths during the pandemic, according to JHU.

A spike in deaths could come, experts say

Hospitals could become overwhelmed as the number of coronavirus cases continues to climb, Dr. Christopher Murray, director of the University of Washington’s Institute for Health Metrics and Evaluation (IHME), told CNN’s Anderson Cooper on Friday.

In El Paso, Texas, where hospitals are struggling to keep up with the number of Covid-19 patients, officials are preparing to add a third mobile morgue unit in anticipation of a spike in deaths.

“If that doesn’t put our situation into perspective I don’t know what will,” County Judge Ricardo Samaniego wrote on Facebook.

The number of hospitalizations is the best measure of how the nation is faring in the coronavirus pandemic, Murray said.

“They are a leading indicator ahead of deaths,” he said.

Murray and his colleagues at IHME are responsible for an influential coronavirus model, which most recently projected 399,000 coronavirus deaths in the US by February 1.

“The fall/winter surge should lead to a daily death toll that is approximately three times higher than now by mid-January,” the IHME said in its latest forecast.

Window to get control over cases narrows

The US has a narrow window of time before more drastic measures like mandatory lockdowns will have to be considered, Dr. Leana Wen, a former Baltimore health commissioner, said Saturday.

“We are seeing Covid-19 hotspots raging all over the country, and right now we have an opportunity to implement targeted measures like universal mask wearing, like making sure that high-risk businesses like bars in certain areas are shut down, like instructing the public that we should be avoiding social gatherings of extended family and friends,” she told CNN.

“But if we don’t do these things now, we’re going to be overwhelming our health systems, and then a lockdown may be necessary.”

With 3,792 new coronavirus cases reported on Saturday, Michigan set a record for its highest daily count since the pandemic began, according to Bob Wheaton, spokesman for the Michigan Department of Health and Human Services.

To help combat the spread in the state, the Michigan health department recently issued new rules for restaurants, to take effect Monday. The order says all restaurants must “maintain accurate records of the names and phone numbers of patrons who purchase food for consumption on the premises, and the date and time of entry.”

New York requires most travelers to get negative tests

With cases surging throughout the country, New York Gov. Andrew Cuomo announced Saturday that most travelers must now get Covid-19 tests before and after arrival in the state.

The new policy replaces a previous advisory list of states with rising case counts from which travelers were required to quarantine for 14 days upon arrival in New York, the governor said during a call with the media.

State officials said the new requirement will be enforced in the same way as the previous 14-day quarantine policy, with travelers being asked to fill out questionnaires. The policy leans on individual compliance.

Don't Miss it Clashes in Spain over coronavirus restrictions continue for second night
Up Next Coronavirus: Australian supermarkets open early for the elderly and disabled | ABC News