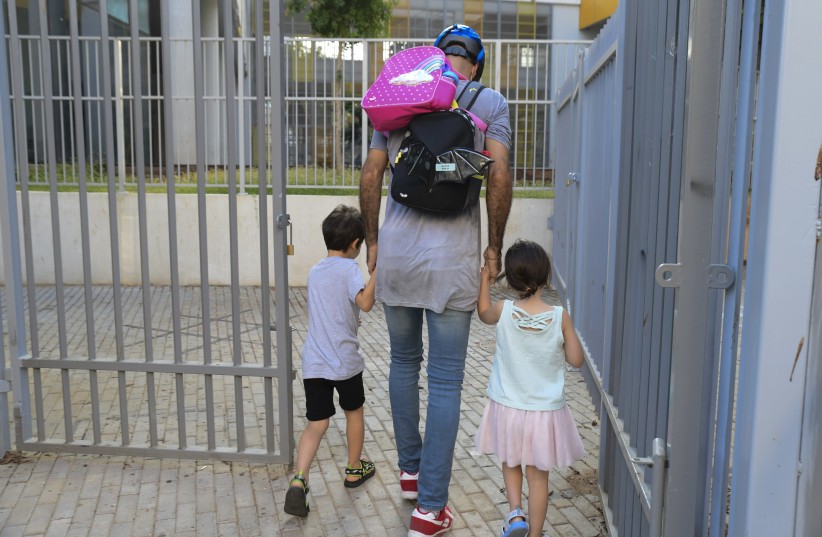 For some parents and students, Sunday might feel like September 1. Children in grades one to four will return to school – albeit in capsules – for the first time since the start of the lockdown.But many parents are nervous about the situation, with students learning in small groups and wearing masks during the day but being combined with up to two other groups for after-school care. “Not sending,” said Elana Yael Heideman from Nes Harim, whose children are ages 6, 10 and 11. “The stress is too much, and we are learning very well at home.”But other parents are overjoyed, such as Mimi Rozmaryn of Hashmonaim whose second and fourth graders “can’t wait to go, and we cannot wait for them to either.” She said that Zoom and other online learning methods have been hard for her family, olim who struggle to understand Hebrew. “The school requested all teachers and students take coronavirus tests last week, and had free no referral needed testing right here, so hoping everyone stays healthy and safe,” she said. Said Yoni Shwartz, a father of a first grader who lives in Modiin: “We are a bit nervous, as to be expected. But at the same time, we feel that it is necessary for many reasons, such as social and educational and must hope for the best.”“I hate the last-minute decisions being made,” said another parent. “A change like this requires a lot of emotional preparedness.”The decision to send children back to school, as well as to open other aspects of the country, including hairdressers, bed and breakfasts and even synagogues was made last minute during a coronavirus cabinet meeting that lasted until nearly 1 a.m. on Thursday. It approved many things, but left street shops closed, despite protests by owners that they could not survive.The cabinet approved allowing one-on-one activities and services (driving lessons or personal training) to resume, complementary medical and mental treatments to be offered, and for bed and breakfasts to open, so long as they host only one nuclear family at a time and don’t provide access to pools or dining hallsIt was also agreed that up to 10 people could pray in synagogues. Haredi ministers had pressured the cabinet to allow more people to worship together, but the request was rejected. The school outline includes allowing classes to resume four days per week for up to 20 students in a group. Municipalities that can provide additional days of instruction will do so. After-school care can have up to 28 children from three different classes, as long as they are the same age. Students and teachers will wear masks all the time, except when eating.In addition, the ministers agreed to reduce the nine-stage exit strategy originally outlined by the Health Ministry to six stages, which had been presented earlier in the week by the National Security Council.The regulations are in effect until November 14.Small business owners took to the streets on Thursday as the cabinet convened, begging the government to allow them to operate. However, ultimately, the cabinet decided to push off opening street shops another week, until November 8, unless there was a significant drop in infection. Finance Minister Israel Katz had pushed hard against Health Minister Yuli Edelstein to approve opening street shops two weeks early, but health officials cautioned that opening stores before there were 500 or less new cases a day could put the country back into another lockdown. “We already see in recent days that opening up a minimal amount has an impact,” the health minister warned at the cabinet meeting. “Opening the economy rashly is the beginning of the next closure. Whoever pushes to exit quickly is operating out of populism, and in the end, will harm the businesses he claims to speak for.”His words stung shop owners especially hard, on a day that they had taken to the streets of Tel Aviv in protest. One owner even threatened suicide should the government not green light resumption of business. “Next time, someone will hang himself,” a shop owner said in a TB interview. “Dead. Dead. Will hang himself in protest. Suicide.”Prime Minister Benjamin Netanyau tried to calm business owners in a video message shared Friday: “To all of my friends, the merchants, I know how difficult it is. I request that you cooperate for another few days. We have promised to open next Sunday, maybe earlier if morbidity goes down, and this is the main problem.“Morbidity is leaping forward around the world,” the prime minister said. “With joint forces we succeeded in lowering it. We do not want it to go up again and then we would need to re-impose the restrictions. I will help you in every way. We have helped you economically; we will help you with even more measures.”Coronavirus commissioner Prof. Ronni Gamzu also spoke to shop owners over the weekend, during a visit to Fureidis, an Arab town in the Haifa district. He, too, promised that if the infection rate decreased these stores would be first to open.“I know what small businesses are. I know how hard it is,” Gamzu said. But he added that the cabinet made the right decision.Some businesses are already threatening to open against the law. At the same time, the government is meant to discuss on Sunday the idea of increasing fines on people who break restrictions. “It’s crazy that we’re opening up in a dramatic way without raising fines,” senior Health Ministry officials were quoted as saying by Israeli media. “It’s critical. Five-thousand shekels does not deter anyone.”Gamzu had long pushed to increase fines by up to five times as much, but haredi lawmakers have pushed back – mainly because some of the increases, such as fining educational institutions that open against regulations NIS 25,000, impact their constituencies the most. There were 674 people diagnosed with coronavirus on Friday, and another 138 between midnight and press time on Saturday, the Health Ministry reported. At press time, there were 419 people in serious condition, including 182 who were intubated. The death toll stood at 2,523.