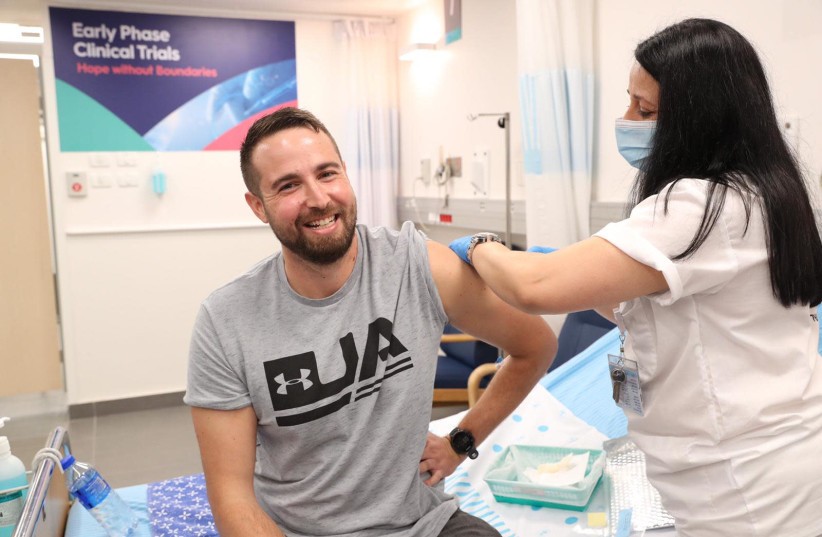 “I feel good, excited,” Ottolenghi, a doctoral student in immunology at Ben-Gurion University of the Negev, said shortly after he was inoculated. “I want to encourage as many people as possible to join the experiment and help the entire public.”

The Israeli vaccine, known as “Brilife,” was developed by the Israel Institute for Biological Research. Sunday marked the start of the Phase I human trial.

“The true exit from the coronavirus crisis is in the development of vaccines,” Prime Minister Benjamin Netanyahu said shortly after meeting with Harel. “Therefore, this is a very important day, a day that gives a shot of encouragement… We wish success during these and the latter stages. With God’s help, we will have a vaccine made here in Israel. This is a very big thing.”

The Health Ministry also is working with major pharmaceutical companies to bring vaccines to Israel, he said. The country has already signed contracts with American vaccine makers Arcturus and Moderna. Last week, it was revealed that the Mossad brought China’s coronavirus vaccine to Israel in recent weeks to study and learn from it.

“I personally am using my connections with world leaders so that we will be able to receive their production here, not at the end of the line but at the front,” Netanyahu said. “I have spoken about this with my friend US Vice President Mike Pence, who is dealing with this issue in the US, with German Chancellor Angela Merkel, with Indian leader Narendra Modi, with Russian President Vladimir Putin, with Italian Prime Minister [Giuseppe] Conte and with others, which I [have] yet to tell you about.”

“What is important is that with this or that means, with the independent production that has been developed here or through the importing of vaccines from abroad, we will bring enough vaccines for all citizens of Israel,” he continued. “Then we will be able, at long last, with God’s help, free of the pandemic. I do not think that this will happen immediately, but I do tell you that I already see the light at the end of the tunnel – I see vaccines in the State of Israel.”

Netanyahu stressed he has ordered that an enterprise for the permanent production of vaccines be established in the country.

Defense Minister Benny Gantz expressed “cautious optimism” because while he has trust in the in the country’s top doctors and scientists, “this process is still a long process. It will take time to follow, process the data, analyze the meanings, so patience is necessary.”

The Phase I trial will be conducted on 80 healthy volunteers between the ages of 18 and 55. Each volunteer will be monitored over the course of three weeks to determine if there are any side effects caused by the vaccine. Researchers will also examine whether volunteers develop antibodies to the coronavirus that lead to immunity.

Depending on the responses of these first two volunteers, others will gradually receive the vaccine candidate beginning on Tuesday in two phases – 40 people at each medical center, IIBR head Prof. Shmuel Shapira said. Each volunteer will receive an injection, but some will receive a placebo.

When Phase I is completed, if successful, Phase II will commence, testing the vaccine on 960 healthy volunteers over the age of 18. Phase II is expected to begin in December at medical centers throughout the country. That phase is meant to complete safety tests, pinpoint the right doses and continue to gauge effectiveness.

If the first two phases are successful, a Phase III trial of 30,000 volunteers will begin in April or May for the final stage. Once completed, the vaccine can be approved, and the population can be vaccinated against the virus.

Phase III will likely be conducted outside of Israel, Shapira said, without saying where that would be since no final agreements have been signed. But he said it would be a country with “a large population and a lot of sick people.”

Shapira, like Gantz, expressed cautious optimism. “If I did not think we had a chance, we would not be here,” he said.

He compared Israel’s vaccine to others being developed, adding: “There are a lot of vaccines that are like birds on a tree,” meaning that they could be fleeting, as they are based on technologies that have not been used before in successful vaccines.

This is the case with the Moderna’s mRNA-1273 vaccine, which uses the mRNA (messenger RNA) delivery platform. Moderna has never completed production of a similar vaccine.

“IIBR has developed many vaccines,” Shapira said. In fact, he told The Jerusalem Post, the institute has been preparing for several years for an unknown threat such as this one. As part of the scientific preparation, it purchased and set up a national infrastructure for rapid identification of epidemic pathogens and developed tools for rapid vaccine planning in response to outbreaks.

Animal models have been put in place to test the safety and efficacy of vaccines and treatments. New infrastructure has been developed and established for rapid and efficient production, amounting to millions of vaccines, under stringent regulatory conditions.

“Six years before this crisis we had already started preparing for such an event,” he said.

IIBR’s coronavirus vaccines had been tested on rats, pigs, hamsters and rabbits and in each case showed safety and efficacy, Shapira said.

In Phase I, doctors are looking for any extreme side effects to the vaccine, which could cause the institute to pause and reevaluate, he said.

IIBR is not currently vying for Food and Drug Administration approval, but at a certain point, it could consider it, Shapira said.