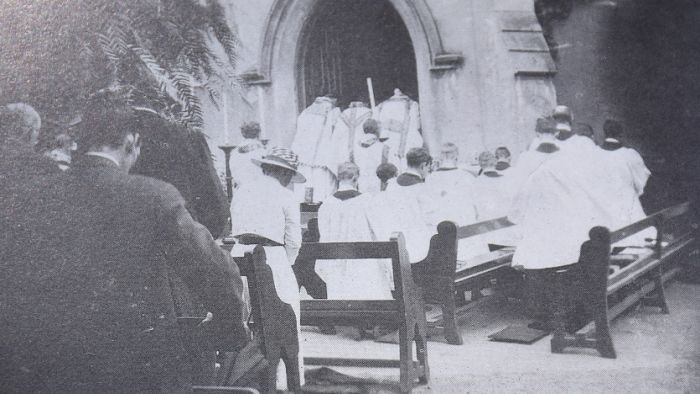 Sue Wuttke had tears in her eyes as the Melbourne church choir she’s been part of for 30 years rehearsed for its first service after months of lockdown.

“I dream about it at night, singing with my colleagues and my family,” she said.

“The choir is my family, we’re all godparents to each other’s children, we’re family.”

This weekend Ms Wuttke and thousands of other Melburnians of faith like her gathered at churches, mosques and synagogues for services, for the first time in more than 100 days.

Under Melbourne’s third step of eased restrictions, religious gatherings are capped at 10 people inside and 20 outside, plus one faith leader.

Father Hugh Kempster says his heart is “filled with joy” at the chance to reconnect with the congregation.(ABC News: Margaret Paul)

Father Hugh Kempster said it was an emotional morning.

“Oh it was just wonderful. 111 days of lockdown, and to have a congregation together again, it was just amazing,” he said.

“My heart is filled with joy, it really is.”

He said while he was supportive of the public health measures, the lockdown had been very hard for people of faith.

“It’s a way of belonging that’s been torn away from us for all this time,” he said.

“What churches do is so important for our society, gathering together, being able to sing songs together, reflecting on meaning and purpose and feeding the poor.”

Echoes of history in service held outdoors Today’s service bore similarities to another one held in exactly the same place in 1919, as an influenza epidemic gripped Melbourne.(Supplied)

Father Kempster said during the lockdown, the church had been live-streaming services, and they would continue to do that for people who couldn’t come along.

He said the church had started a “book-a-pew” system online to manage the numbers of people who wanted to attend.

This is not the first time the congregation has gathered in the car park. Father Kempster said when the first lockdown hit, one of the parishioners found a photo of a service in the same car park during the Spanish Flu pandemic in 1919.

“We’ve been here before, so it’s truly a historic moment,” he said.

It is not the first time Melburnians have seen parallels between the coronavirus pandemic of 2020 and the influenza pandemic that broke out after World War I.

The Great Hall of the Royal Exhibition Building in Carlton was converted into a hospital during the influenza pandemic in 1919.(Supplied: Museums Victoria)

In March, as Australia watched the pandemic overrun New York’s health system, the Victorian Government contemplated the grim possibility of converting the city’s large convention centres or exhibition buildings into medical facilities, or even morgues.

It would not have been the first time for the city’s exhibition buildings to play such a role.

From February to September 1919, the iconic landmark’s Great Hall became a hospital, its basement became a morgue and its banqueting and committee rooms were divided into cubicles to accommodate nursing staff.

According to Museums Victoria, the makeshift hospital was capable of accommodating 1,500 people at a time.

Don't Miss it Covid-19 vaccine predictions of pharma companies that didn’t come true – world news
Up Next What Is Biden’s Plan for Stopping COVID-19?