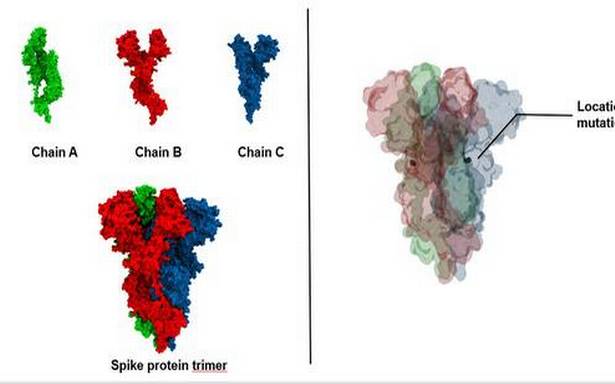 While novel coronavirus is undergoing many mutations, one particular mutation called D614G, according to a study, has become the dominant variant in the global COVID-19 pandemic.

What is the D614G mutation?

When the virus enters an individual’s body, it aims at creating copies of itself. When it makes an error in this copying process, we get a mutation.

In this case, the virus replaced the aspartic acid (D) in the 614th position of the amino acid with glycine (G). Hence the mutation is called the D614G. This mutated form of the virus was first identified in China and then in Europe. Later it spread to other countries like the U.S. and Canada and was eventually reported in India.

How is this mutation different?

The D614G mutation is situated in the spike protein of the virus. “You can think of the spike protein as a massive ‘trimer’ assembly with three protein chains. Each protein chain has two sub-units (S1 and S2). The sub-unit S1 is the one that attaches to the host cells — Human ACE2 receptor,” says Dr. Lipi Thukral, Senior Scientist at CSIR-Institute of Genomics and Integrative Biology (IGIB) in an email to The Hindu.

“The S2 sub-unit mediates the fusion of the viral and human membranes. The D614G mutation is present in the sub-unit S1 of the protein and is also close to the S2 sub-unit. Therefore, it has an impact on the human cell’s interactions with both S1 and S2,” she added.

“In simple words, this particular mutation aids the virus in attaching more efficiently with the ACE2 receptor in the human host, thereby making it more successful in entering a human body than its predecessors,” explains Dr. Saumitra Das, Director of the National Institute of Biomedical Genomics in West Bengal. To provide a clear picture of how transmissible this particular mutation of the virus has become over time, a paper in the journal Cell says that the mutation was found in 10% of 997 global genome sequences before March 1, 67% of sequences between March 1 and March 31 and 78% of the sequences between April 1 and May 18.

What are the effects of the mutation?

A preprint posted in medRxiv, which has not undergone peer-review, explains the sequenced genomes of 5,085 SARS-CoV-2 strains in Houston. By doing so, it discovered that not only did the D614G show increased infectivity but it also displayed greater ability at attaching itself to the cell walls inside an individual’s nose and throat, increasing the viral load.

However, the paper could not establish any direct correlation between this particular genetic change in the virus and an increase in the severity of COVID-19 or its impact on a patient’s mortality.

The patients seem to be exhibiting variable reactions to it depending upon their genetic constitution, age, exposure to other diseases etc. Researchers are still pondering over the effects of this mutation.

How prevalent is it in India?

“The D614G mutation, which is the defining mutation for clade A2 of the virus, is indeed, quite prevalent in India,” Dr Anu Raghunathan, Senior Principal Scientist at CSIR-National Chemical Laboratory said in an email to The Hindu.

A study (a preprint posted on bioRxiv) — which collected SARS-CoV-2-positive samples from the various States like Delhi, Tamil Nadu, Maharashtra and Uttar Pradesh among others — reveals that the D614G was one of the most prevalent spike mutations even during the initial phase of the pandemic.

Since then, D614G mutation’s ‘relative abundance’ has increased over time to 70% and above, in most States except Delhi, reports another pre-print in BioRxiv after analysing samples from 10 Indian States.

Can this mutation impact vaccine research?

A paper in the journal, Nature, after conducting experiments on hamsters, concluded that this particular mutation may not reduce the ability of vaccines in clinical trials to protect against COVID-19 and that the therapeutic antibodies should be tested against the circulating variant of the virus before clinical development.

“There is a need for extreme caution with premature inferences on mutations and their effects without supporting experimental evidence. This could result in a media frenzy and potentially undermine public confidence in vaccines,” Dr. Raghunathan states.

Don't Miss it Australia coronavirus live: Victoria reports no Covid cases as border wars continue – live updates | Australia news
Up Next German President Steinmeier: 'This is a test for our democracy' | DW Interview