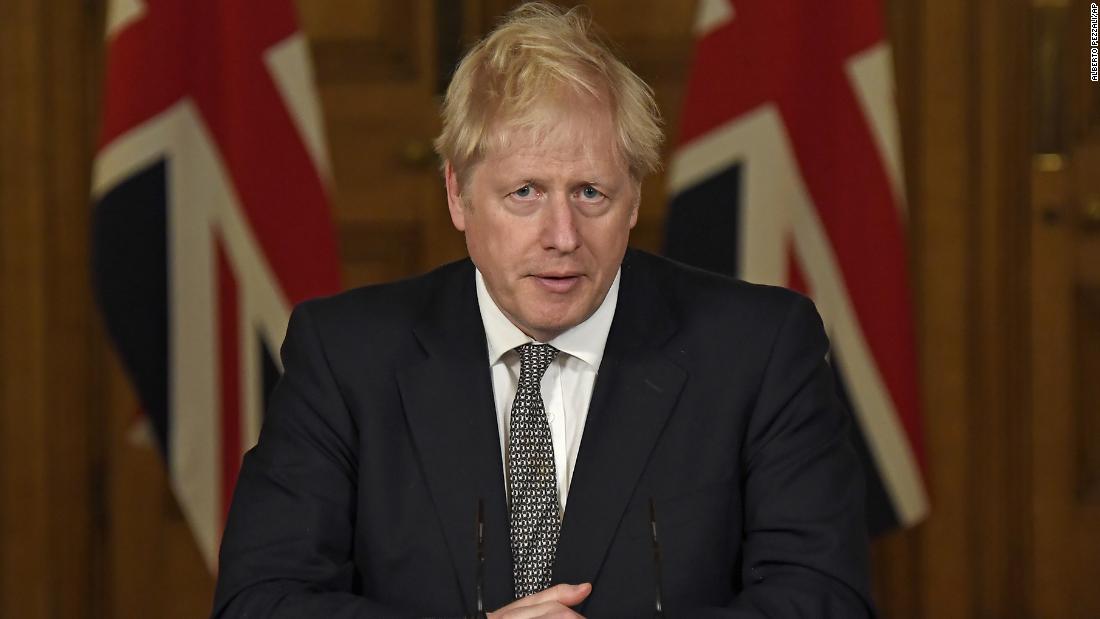 The infection rate in the country has been rising steeply for weeks. The Office for National Statistics now estimates that 1 in 100 people in England have Covid-19, compared with 1 in 2,300 in July and 1 in 200 at the start of October.

Johnson’s cabinet was advised that if no action was taken, the National Health Service’s bed capacity would be surpassed by the first week of December.

“Normally, advisers advise and ministers decide. Yet that system has broken down with Sage [the Scientific Advisory Group for Emergencies] believing its advice to be more like commandments written on stone and its members publicly lecturing the Government over the airways,” Duncan Smith wrote.

Many others believe the lockdown has come too late. Sage first suggested stronger restrictions six weeks ago, when it called for a short “circuit-breaker” lockdown to bring case numbers down.

The group said in a document released on September 21 that “a package of interventions will need to be adopted to prevent this exponential rise in cases,” including the closure of bars, restaurants and gyms.

The new lockdown, which will come into place in England on Thursday morning following a Wednesday vote in Parliament, will see all bars and restaurants closed except for takeout and delivery, as well as the closure of all non-essential businesses including gyms and hair salons. Schools, universities and childcare facilities will remain open.

Residents will only be allowed to leave their homes for specific purposes including education, work (if they cannot work from home), exercise, medical issues, or to buy food and essential items.

UK Minister for the Cabinet Office Michael Gove said Sunday that England’s second lockdown could be extended beyond December 2 — the point at which the Prime Minister said he expected the current regional tiered system to be reintroduced.

“We are going to look at all of the data, we’ve got this four-week period during which we are going to review progress, but of course we’ll always be driven by the data,” Gove said on Sky News.

Gove said ministers would review lockdown measures on December 2, with the aim of seeing the R (reproduction) rate — the number of people that one infected person will infect — fall below 1.

Opposition Leader Keir Starmer said the lockdown should have been imposed three weeks ago and would now have to go on for longer.

“I’m so frustrated at the incompetence of the government,” the Labour party leader told the BBC’s Andrew Marr. “The government was too slow in the first phase of the pandemic and now it’s been too slow again, and there’s a cost to this. That’s why the lockdown will now go on longer.”

Gove told the BBC that he did not accept that the government had got it wrong and waited too long. “The advice we were getting at the time indicated that a regional approach was entirely appropriate,” he said on The Andrew Marr Show.

Elsewhere in Europe, several cities in Spain saw a second night of unrest Saturday, amid protests against stricter limits on social activities and movement aimed at restraining the spread of coronavirus.

Police made 33 arrests in the Spanish capital, Madrid, overnight, after crowds of young people took to the streets. Twelve people were hurt, three of them police officers. Videos posted on social media showed running battles in central Madrid as well as some damage to stores.

The city’s mayor, José Luis Martínez Almeida, called on young people to observe the nightly curfew, which was introduced across Spain last week.

There were also disturbances in Bilbao and Vitoria in northern Spain, and in Malaga in the south.

Spanish Prime Minister Pedro Sanchez condemned the violence and called for unity, writing on Twitter: “Violent and irrational behavior by a minority is intolerable.”

On Friday night, 12 people were arrested after violent protests broke out in Barcelona.

The Spanish government introduced stricter limits on movement and activities amid a second spike in infections. Spain has recorded 1.18 million cases of the coronavirus, while more than 35,000 people have died.

Portugal on Saturday introduced a lockdown for most of the country. From Wednesday, residents are required to stay home for all but essential outings. Gatherings of more than five people are banned, and no more than six people can sit together in a restaurant, unless they are family members.

The new restrictions, in effect at least through November 15, cover 121 municipalities in Portugal, including the capital, Lisbon.

Portugal saw its highest daily death toll and case count on Friday, with 40 Covid-related fatalities and 4,656 new cases. There have been 137,272 confirmed Covid-19 cases in the country and at least 2,468 people have died.

Austrian Chancellor Sebastian Kurz announced Saturday that the country will enter a second lockdown on Tuesday at midnight. The new measures will last until the end of the month, he said at a news conference.

“These are dramatic interventions that are not easy for us — but they are necessary,” Kurz said on his official Twitter account.

Only two households will be allowed to meet and a curfew will be introduced between 8 p.m. and 6 a.m. Stores will remain open.

“We are aware that these measures are unpopular and they mean a massive restriction of freedom. But they are necessary to relieve our intensive care system,” said Kurz.

“The real breakthrough or the end of this pandemic will not take place until a vaccine is researched. I remain optimistic and believe that we will be able to return to normality by next summer at the latest.”

Poland registered a fifth straight day of record increases in infections on Saturday.

The government has introduced new restrictions, including shutting down cemeteries for three days ahead of All Saints’ Day on Sunday, when many Poles visit the graves of loved ones.

The health ministry on Saturday reported 21,897 new cases, more than double the figure from last Monday. It also reported a further 280 Covid-related deaths.

A record 7,281 people were in hospital with coronavirus in the Czech Republic as Covid-related deaths reached 3,078 and cases hit 13,605 Friday, according to the country’s health minister.

The country has the second-highest number of infections per 100,000 people in the European Union and UK, after Belgium, according to the European Centre for Disease Prevention and Control.

The Czech Parliament has approved an extension of the state of emergency until November 20, which enables the government to keep the strict measures in place for another three weeks. These include the closure of schools, restricted movement, and the closure of many shops and services.