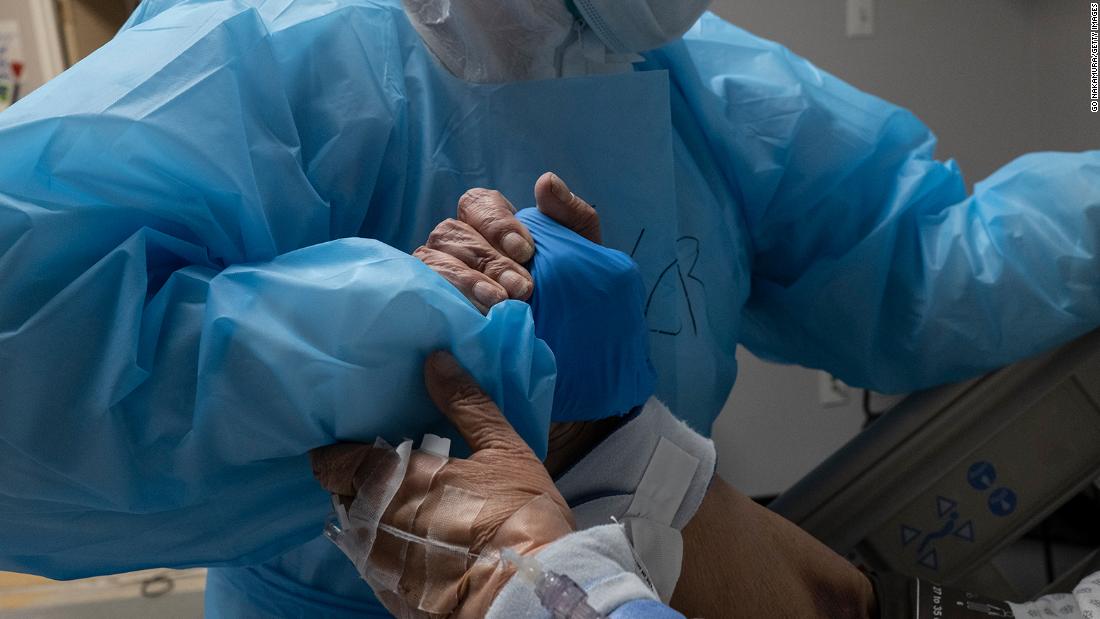 Hospitalizations were on the rise in 47 states last month, according to the Covid Tracking Project, and a total of 47,502 people were hospitalized as of Sunday. The rates come alongside a surge of cases that made October a record setting month for coronavirus infections in the US.

The US recorded its highest number of new cases on Friday with a reported 99,321, the record for any nation in the world. And experts have said that the impacts will likely continue to get worse as colder months drive up infections.

“We’re right at the beginning of what looks like exponential growth in a lot of states,” Dr. Scott Gottlieb, former commissioner of the US Food and Drug Administration, said on CBS’s “Face the Nation” on Sunday. “This is very worrisome as we head into the winter.”

Gottlieb expects Thanksgiving to be an inflection point, and from there he said the hospital system is going to be facing pressure similar to the early spikes — when hospitals around the country were reaching capacity and healthcare workers were stretched thin.

Dr. Christopher Murray, director of the University of Washington’s Institute for Health Metrics and Evaluation, said hospitalizations are the best measure of how the nation is faring against the pandemic and are often an indicator of how the number of deaths will trend.

The seven-day average for new cases currently is more than 81,300 — higher than any other time in the pandemic. The surge has brought cases to more than 9.2 million in the US since the pandemic began, and 230,996 people have died, according to data from Johns Hopkins University.

Covid-19 spread and hospitalizations have reached staggering levels across states.

This week, there were more new coronavirus cases in Kentucky than any other week since the pandemic began, Gov. Andy Beshear said in a statement Sunday.

“I know we’re tired, but if we do not get the spread of this disease under control, we risk a darker, more deadly period this winter than we ever experienced in the spring,” Beshear said.

Illinois is working to manage the virus by putting the entire state under resurgence mitigation measures, Gov. J.B. Pritzker and the Illinois Department of Public Health said Sunday. The state reported nearly 7,000 new cases on Sunday.

“As cases, hospitalizations and deaths are rising across our state, across the Midwest and across the nation, we have to act responsibly and collectively to protect the people we love,” Pritzker said in a statement.

The number of people hospitalized due to coronavirus in El Paso, Texas, has reached an all-time high of 943 patients. And hospitals are struggling to keep up.

Officials in the area are preparing to add a third mobile morgue unit in anticipation of a spike in deaths.

“If that doesn’t put our situation into perspective, I don’t know what will,” County Judge Ricardo Samaniego wrote on Facebook.

Though not expected until 2021, multiple vaccines are in development and officials are making plans for their distribution.

Cuomo said the plan, as explained to him by the White House, involves the military distributing a future Covid-19 vaccine to large chain-pharmacies for distribution, a plan he said would disproportionately limit distribution in communities of color.

“Why was the Covid infection rate so much higher in communities of Black and brown people?” Cuomo said. “Because they’re health-care deserts.”

The Department of Health and Human Services (HHS) said in September that it will coordinate with the Department of Defense and the US Centers for Disease Control and Prevention on the delivery of vaccine supplies.

Cuomo called on the administration to conduct specific vaccine outreach in underserved communities, and to give states funding to develop their own such programs.

Once the highest, New York’s coronavirus test positivity rate is the third lowest in the nation at 1.51%, Cuomo said.

“New Yorkers should be very proud of that fact, but we also need to remain vigilant,” Governor Cuomo said.