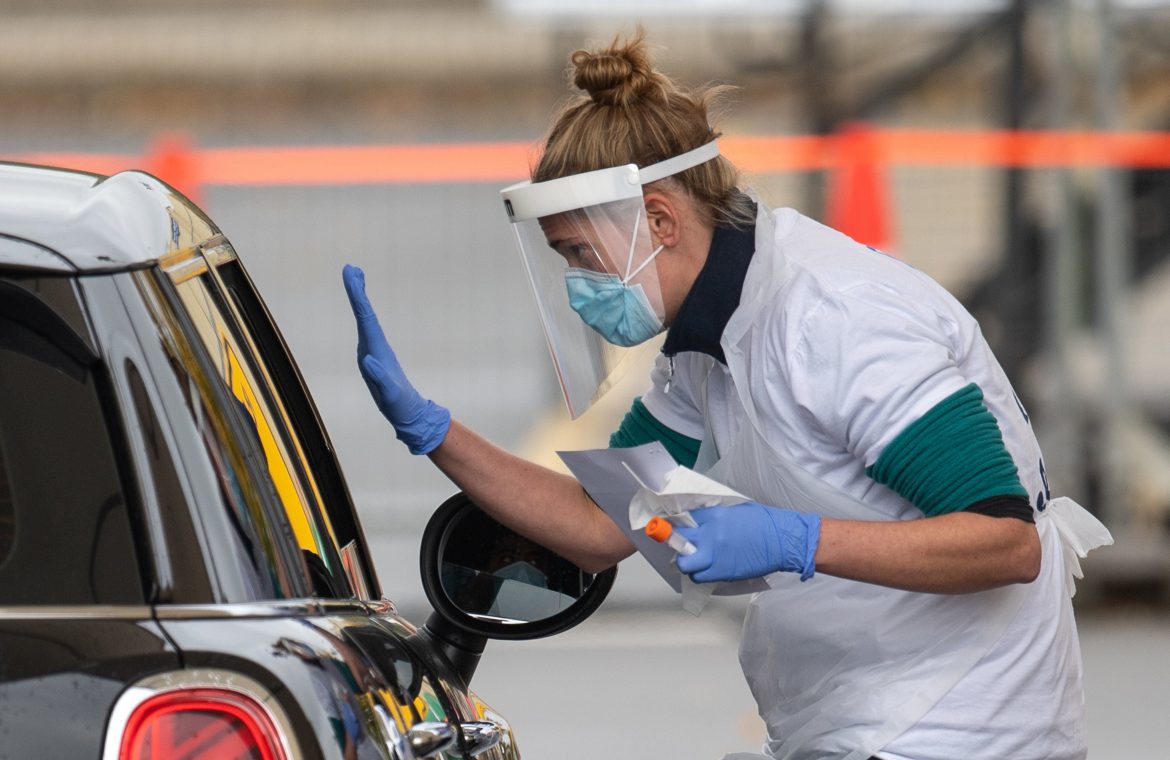 nger is growing over England’s looming lockdown after an expert said the data used at Boris Johnson’s weekend press conference was out of date.

Professor Carl Heneghan made the comments as chief scientific adviser Sir Patrick Vallance and chief medical officer for England Professor Chris Whitty prepared to face questions from MPs on Tuesday afternoon over the science behind the second national shutdown.

Meanwhile, mass testing could be rolled out in London if a trial scheme in Liverpool proves to be a “game changer”. Citizens in the northern city are to be offered free instant tests this week and next, in the first test of a system that could identify carriers without symptoms and liberate others from having to self-isolate unnecessarily.

It comes as the number of people dying with Covid-19 in the UK increased by 48 per cent in the last week to 1,126. The Office for National Statistics said this was an increase of 365 deaths on the 761 registered the previous week.

There have been a further 1,119 cases of coronavirus in Wales, bringing the total number of confirmed cases to 54,456.

Public Health Wales reported a further four deaths, taking the total in Wales since the start of the pandemic to 1,895.

Chris Green, Tory MP for Bolton West, said on Facebook he will vote against a second lockdown because it would be “ineffective and worse than the disease itself”.

He wrote: “I will be voting against the second lockdown.

“I know this goes against the wishes of the Government and the Labour Party.

“I am doing this because of the experience my constituents have had demonstrates that this approach to dealing with Covid is ineffective and worse than the disease itself.”

The Prime Minister’s official spokesman would not say whether a possible cut in the self-isolation period for those who test positive for Covid-19 was related to Government plans for a mass rollout of public testing.

It comes after Boris Johnson promised a “big, big push” on isolation compliance for those who test positive or come into contact with a positive case. Currently rules state travellers into the country must self-isolate for 14 days. Advice states people should stay at home and begin to self-isolate for 10 days if they have a positive test result.

The Number 10 official said: “We are reviewing the period of time under which people are asked to self-isolate and that work is ongoing. We will set out further details in due course.”

Asked whether the review might see the stay-at-home period cut to 10 or even seven days, the spokesman said: “I don’t have a timescale for you on when we will be in a position to announce the next steps, but we have said we are looking at a reduction in the period of self-isolation.

“I don’t think I have specified a specific time-limit but it is something we are looking at.”

Pushed on whether the cut would be linked to the roll-out of more mass testing, the spokesman added: “As I say, the work’s ongoing and I can’t pre-empt it, as I’m sure you’ll understand.”

Number 10 said the UK Government would “of course” provide economic support should Scotland require its own national lockdown after December 2.

The Prime Minister’s official spokesman, asked whether there could be a Scotland-only furlough scheme, said: “The UK Government has intervened in an unprecedented way to save nearly one million jobs in Scotland during this pandemic.

“The Scottish Government has also benefited from £7.2 billion of additional support as a result of the UK Government’s Barnett guarantee and furlough has always been a UK-wide scheme, and, as the PM has said, the Government will always be there to provide support to all parts of the United Kingdom.”

Responding to an urgent question from Labour on economic support for the second national lockdown in England, he said: “Yesterday the PM set out why we are introducing new measures to tackle coronavirus. This decision is not one we would wish to take, but it responds to the soaring infection rate.

“Just as we have a responsibility to protect lives, we must also safeguard livelihoods. That’s why the Government has provided unprecedented levels of financial support throughout this crisis. A package described by the IMF as one the best examples of co-ordinated action globally.”

He added: “We will also uplift the Barnett guarantee this week to give Scotland, Wales and Northern Ireland further certainty over their upfront funding.

“These measures build on the Government’s economic package that now totals over £200 billion. They will provide security to millions of people while giving businesses the flexibility to adapt and plan, and they underline our unrelenting focus on listening and responding to the damaging path of this virus.”

1604408511Domestic abuse cases are being given priority in the courts following a “big demand spike” during the pandemic,

“What steps are being taken to ensure that trials of people accused of domestic abuse, and indeed support for their victims, are being prioritised by Government?”

Justice Secretary Robert Buckland replied: “I am grateful to (Mr Gwynne) and he can be reassured that throughout the pandemic domestic abuse cases appearing in the Magistrates Court, and indeed in the Crown Court, have been given the priority that we all expect them to be allocated.

“We’ve seen, of course, a big demand spike in the Covid crisis for domestic abuse support services, which is why the package that I referred to in the previous answer, the £25 million package – of which £22 million has already been allocated to support groups related to domestic abuse and sexual violence –  is already making a real difference to victims and those affected by domestic abuse.”

While she added there would be “difficult judgments for the future”, she said prevalence of coronavirus was lower in Scotland than other parts of the UK.

“That is, we believe, partly down to the plan we have been following,” the First Minister said.

With Scotland having moved to a new five-tier system of restrictions on Monday, Ms Sturgeon said her government would be “closely monitoring” the data ahead of the first review of the levels council areas have been placed in on Tuesday November 10.

She said: “The fact that we acted quickly to control the pandemic in September and October means we are now, we think, seeing some encouraging signs in the figures for new cases.”

Dr Andrew Goodall told a press conference that the figure was 18 per cent higher than last week and the highest number since late April.

“We expect demand for hospital treatment for people with coronavirus to continue to increase in the days and weeks ahead,” Dr Goodall said.

There are 57 people being treated in critical care for coronavirus, an increase of 12 per cent on last week, with about a third of critical care capacity being used for such patients.

A YouGov survey commissioned by BBC North West after the city was placed into Tier 3 showed that 67 per cent of people asked thought that the South was being given better treatment – with only 1 per cent believing the opposite was true.

The poll, of 1,028 people, found that 70 per cent of respondents believe the Government is handling Covid-19 badly; and 61 per cent disapprove of Mr Johnson’s handling of the issue, with 67 per cent having either not much or no confidence in the Prime Minister making the right decisions.

A total of 60 per cent support England going into a national lockdown, with 48 per cent believing that decisions around lockdown measures should happen at the same time for the whole of England, even if some areas are at different levels than others at reducing the spread of the virus.

More people approved of Mr Burnham’s handling of the coronavirus situation than Mr Johnson’s – with 56 per cent supporting Mr Burnham, compared with just 23 per cent approving of the Prime Minister, and 58% trusting the mayor to make the right decisions.

They also supported the move into Tier 3 for Greater Manchester – with 54% approving of the tougher restrictions – but only 26 per cent thought it would be effective at reducing the spread of coronavirus.

During justice questions, Labour’s Dame Diana Johnson said levels of anti-social behaviour were growing in parts of her Hull North constituency, adding: “The perpetrators behave as if they’re beyond the reach of the justice system and the law.”

Responding, Mr Chalk told the Commons: “Those people who want to perpetrate anti-social behaviour should understand that the courts are operating, police are there to make arrests and that justice will be done.

“That is what is being delivered during this pandemic thanks to the hard work of plenty of people.”

In response to Labour’s shadow justice minister Peter Kyle, Mr Chalk added: “In the magistrates’ courts the backlog is being eroded because … disposals have exceeded receipts since the end of July, the number of trial courts is higher than the baseline.”

Don't Miss it Experts argue about herd immunity as a strategy in the fight against coronavirus | COVID-19 Special
Up Next Today’s coronavirus news: New restrictions take effect Tuesday in Austria and Greece; Infections soar in Russia; Outbreak declared at B.C. dance academy as 26 test positive