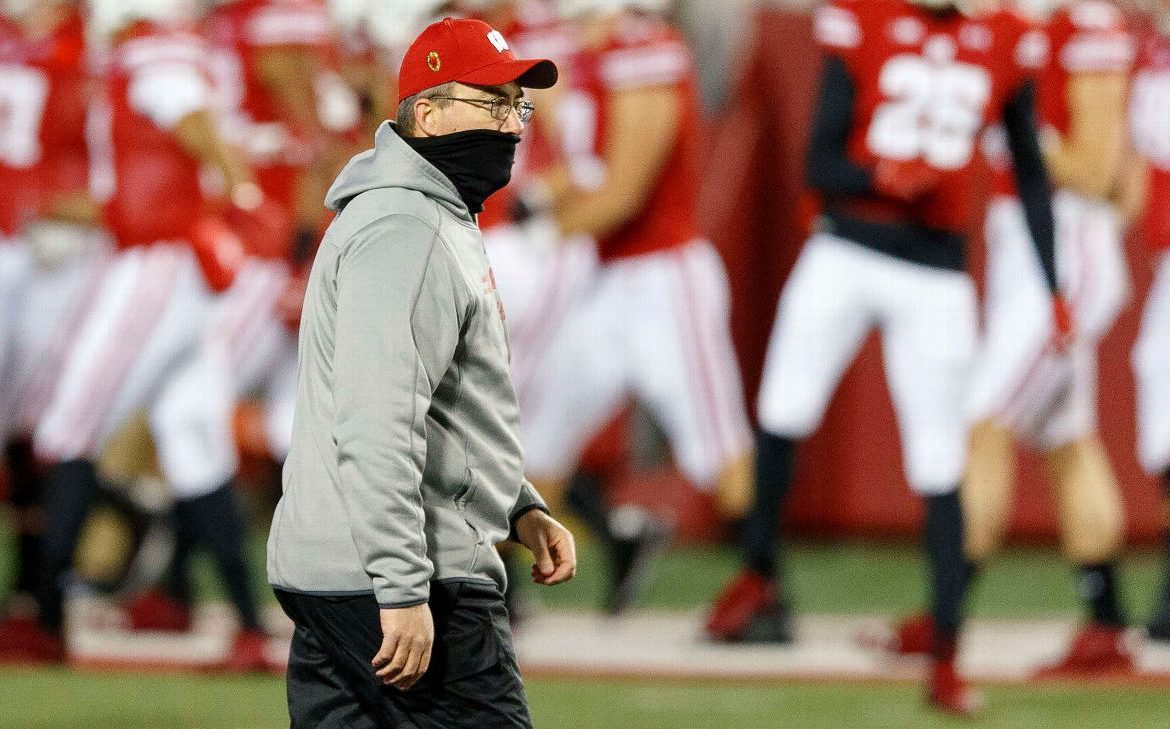 Wisconsin announced on Tuesday that its football game this weekend against Purdue has been canceled and team activities remain paused indefinitely because of the number of positive coronavirus cases within the program.

The Badgers originally canceled the game against Nebraska on Oct. 31, after the program had 12 positive tests, including starting quarterback Graham Mertz and head coach Paul Chryst. That number of positive cases then rose to 22, made up of 12 players and 10 staff members.

Athletic director Barry Alvarez initially announced the team would pause football activities for seven days on Oct. 28, but now says it will be indefinite as the program deals with the outbreak and it is canceling its second game with no plans to reschedule.

“I share in the disappointment of our student-athletes and staff,” Alvarez said. “We have seen a level of improvement in our testing numbers, but not enough to give us confidence to resume normal activities and play our game on Saturday. We will continue to test regularly, take the proper health-related precautions and look forward to getting our team back on the field as soon as possible.”

There have been five positive tests since Oct. 31, and there are now 27 total active cases within the program, which includes 15 student-athletes and 12 staff members.

The program has said that Chryst could return on Thursday, and there has been no change in that, according to a school spokesman.

Alvarez said the program initially felt as though it would be able to get the outbreak under control and that the team had sufficient depth to execute a game. While it is not yet in the red/red category under Big Ten protocols that would force the team to stop regular practice and competition for a minimum of seven days, the team decided it would be best to halt activity to get the virus under control.

“I felt very confident — if we continued we were getting things under control. In the last three days, if I counted right, we had 11 positives in the program and just didn’t feel as though we had our arms around it, had things as I thought we needed,” Alvarez said. “Keeping your priorities in order, the health and safety of our student-athletes is top priority.”

The Badgers continue to conduct antigen testing as well as PCR testing. But despite the regular testing, the athletic department is still searching for answers on how the outbreak happened and where it started.

“We try to take a look at that, each of us talking about different situations. Analyzing, we’ve got one of the doctors on campus who has some research on tracking where the virus came from,” Alvarez said. “He’s trying to help us, we’re trying to locate a source and trying to figure it all out. We haven’t put it together yet, but that’s something we’re all trying to do. Hopefully we’ll get an answer soon.”

While football activities are paused, Alvarez said the team is still meeting via Zoom calls and believes players were permitted access to the weight room on Monday. He doesn’t know the full extent of what the team is allowed to do and when team activities will resume.

He and the rest of the program continue to look for ways to improve going forward and were given some help from former Badgers football player Troy Vincent, who is now the executive vice president of NFL operations, on what the NFL has done to help mitigate spreads.

“(He) sent me all of the protocol that they use in the NFL. From how they board planes, how they sit, how they space at meals,” Alvarez said. “How they space in meetings, how they do everything and how it’s charted. Wanted me to share it with Paul (Chryst), with our doctors, study it and see if there are some things we haven’t done, the things we can do better that the NFL has really researched and studied and put together.”

Wisconsin will provide another update on the team’s status on Saturday.

If the average number of Big Ten games falls below six, then teams must play no less than two fewer games than the Big Ten average to be considered for the league championship. The champion will be determined in each division by its winning percentage, unless there is an unbalanced schedule because of the cancellation of games. If that’s the case, there are several scenarios in play.

Information from ESPN’s Heather Dinich was used in this report.