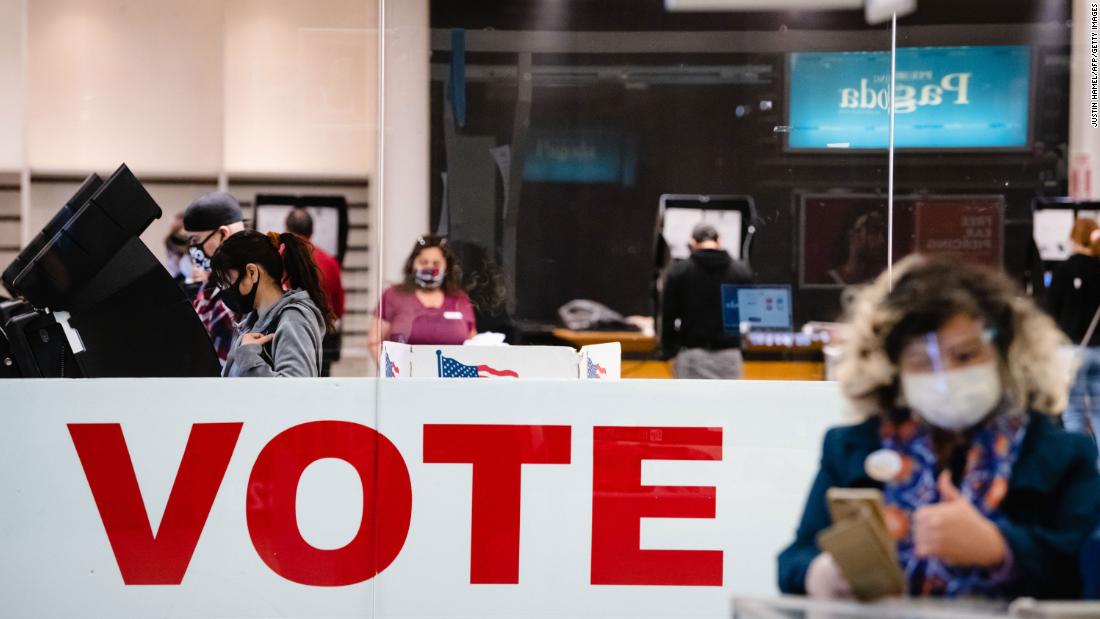 El Paso became one of the nation’s hot spots for the virus after seeing a dramatic rise in Covid-19 cases over the past few weeks. Tents were built outside a hospital to treat the influx of patients, health care workers traveled from across the state to help and the medical examiner has received additional morgues.

On Tuesday, people stood in line inside a shopping mall, schools emptied by the pandemic and outside a downtown fire station. Drivers also waited in the parking lot of a shopping mall in West El Paso, where the county set up a curbside polling place.

Along with “I voted” stickers emblazoned with “El Paso Strong” — the slogan that became a rallying cry for the community after a gunman opened fire at a busy Walmart store last year, killing 23 people — voters also received sanitizing wipes, a Q-tip and a finger cot to touch the voting machines.

Brenda Negrete, a generalist for the El Paso County Elections Department, said El Pasoans were “excited” that more than 10,000 people cast their ballots in the first three hours of voting on Election Day.

“It’s not stopping them,” Negrete said. “We saw it the first day of early voting and we are seeing it now.”

Singer Khalid encouraged El Pasoans to vote and take “extra safety precautions because COVID is rising at an exponential rate!” The artist, who moved to El Paso during his senior year of high school, said he voted in El Paso last week on the last day of early voting.”MAKE TEXAS BLUE,” he tweeted.

Outside the Pavo Real Recreation Center, which served as a polling station in El Paso’s Lower Valley area, US Rep. Veronica Escobar spoke to voters in person and virtually.

“Please mask up, go vote and then go back home,” Escobar, who is running for reelection in the 16th Congressional District, said on Instagram.

As of Tuesday morning, El Paso County, which sits on the southern border with Mexico, had reported 1,085 new positive Covid-19 tests and four new deaths, bringing the total death toll to 609, according to the City/County of El Paso Covid-19 website. Officials said 998 people were hospitalized on Tuesday.

State officials are battling shutdown ordered by the county

The city is currently under a two-week shutdown of nonessential services and a curfew related to coronavirus, but officials have said voting will not be affected.

Last week, El Paso County Judge Ricardo Samaniego, a Democrat, went against directives by the Republican governor and issued a two-week shutdown of nonessential services, such as tattoo parlors, hair and nail salons and gyms. Restaurants in the county will be limited to delivery or curbside service.

Texas Attorney General Ken Paxton filed a motion for a temporary injunction on Tuesday to stop the “unlawful lockdown order.”

“I am optimistic that the district court will recognize the unlawfulness of this action and quickly stop these orders from further oppressing the El Paso community.”

“Judge Samaniego has no authority to flout Gov. Abbott’s executive orders by shutting down businesses in El Paso County,” Paxton said in a statement.

Texas was one of the first states in the country to begin a phased-in approach of reopening back in May. As the summer surge of cases rippled across Texas and the nation, Gov. Gregg Abbott took steps like closing down bars and issuing a mask mandate, but he largely maintains authority when it comes to shutdowns.

A hearing on the motion has been scheduled for Wednesday.

Don't Miss it In February, we thought masks were unsafe. Here’s what we’ve learnt about COVID-19
Up Next Trump leaves hospital after three nights being treated for COVID-19 | ABC News