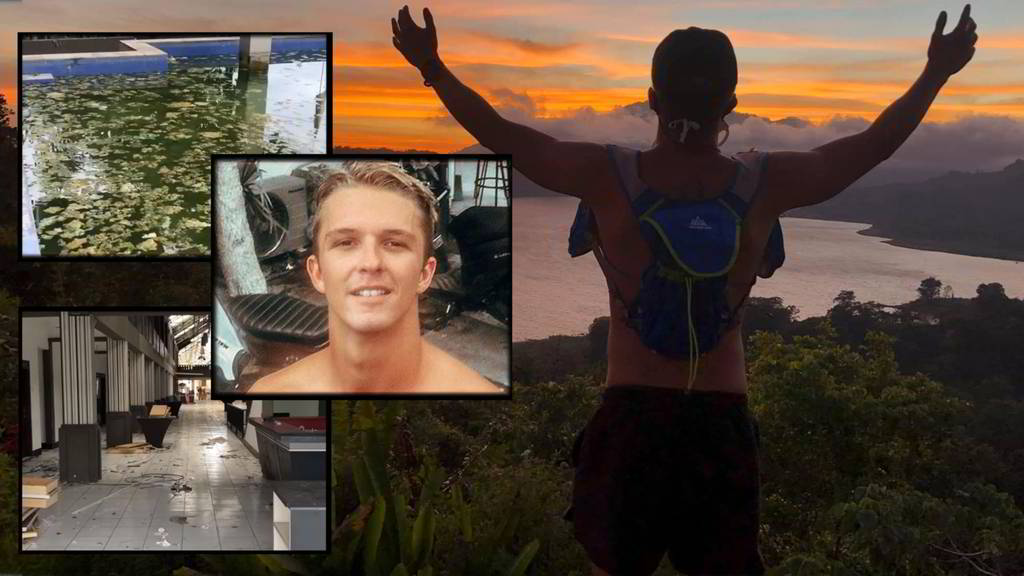 A young West Aussie living in Bali has given a glimpse into the heartbreaking reality of the island paradise, as the coronavirus pandemic ravages the former tourist hotspot.

Perth native Jack Ahearn showcased the devastating impact of COVID-19 on a once-thriving Kuta Beach hotel in a video posted to his Facebook page.

The shocking video shows a luxury hotel pool turned green by algae and filled with rubbish and the lobby stripped bare, trashed and falling apart.

WATCH THE VIDEO IN THE PLAYER ABOVE

Revealing he drives through Kuta most days to surf, Mr Ahearn said has seen first-hand the rapid deterioration of the holiday hotspot.

“Every week there are more for sale signs, for rent signs, empty businesses and buildings — it’s nuts,” he said.

“The videos and pictures I post don’t do justice to the feeling this place gives off now.”

More than a million Australians usually head to Indonesia every year, but due to the coronavirus pandemic and subsequent closure of international borders, the tourist destination is now a ghost town.

“The only time I’ve seen it ‘busy’ since February is when there is a food hand out and families are lined up by the 100’s,” Mr Ahern said.

He also called on Australians to reach into their pockets for the struggling locals.

“If you have the means, reach out to your holiday driver you use or any Balinese you know and love. I’m sure they could use a $1 or $2,” he said.

“It’s a long, long, long way away for places like Kuta to recover.”

Earlier this week, WA Premier Mark McGowan shut down any chance of sandgropers returning to the holiday destination anytime soon, saying he “can’t see Bali being an option until there’s a vaccine”.

Speaking on Seven’s Flashpoint on Tuesday, Mr McGowan said the “biggest threat” to our State was the importation of the virus from overseas.

“I don’t want us to open international borders until we are very, very sure.

“I just say to the commonwealth government, do not open up the international borders until such time that it’s safe, and that would mean a vaccine.

“I just can’t see Bali being an option until there’s a vaccine.”

Don't Miss it London coronavirus latest: Number of Covid-19 patients in capital’s hospitals set to hit 1,000
Up Next US Coronavirus: Second highest number of new Covid-19 cases reported on Election Day, with more than 91,000 infections