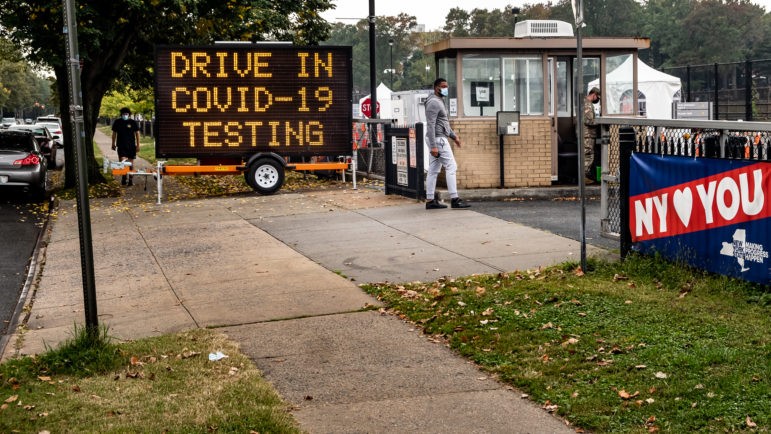 It’s been nearly a month since New York started its “Cluster Action Initiative” to contain the spread of coronavirus by instituting restrictions in specific hotspot neighborhoods. Will it keep a second wave at bay?

A recent Tuesday afternoon at a drive through COVID testing site on Goulden Avenue in the Bronx.

At the start of October, as certain areas of Queens and Brooklyn experienced upticks in  COVID-19 cases, New York state and city officials put forward a localized strategy for containing the virus, imposing additional restrictions on businesses, schools, and gatherings in specific neighborhoods.

As of Saturday, New York City’s average number of daily COVID-19 cases reported over the past week was 593, up slightly from 551 the previous week and more so from 354 at the end of September. Bruce Y. Lee, a health policy and management expert at CUNY School of Public Health, says New York City isn’t at a point that he’d call a “second wave” quite yet. However, the upticks in cases are consistent with the message public health officials, including Dr. Anthony Fauci, have been trying to get across since September: The pandemic is not over, and cases will likely rise during the fall and upcoming winter. While infection rates stayed relatively low in the city this summer, people tend to congregate more indoors during colder months, where the coronavirus can spread more easily; it’s also flu season.

It’s been nearly a month already since New York started its “Cluster Action Initiative” to contain the spread of coronavirus by instituting restrictions in specific hotspot neighborhoods, organized into color-coded “zones” based on the severity of cases there. So far, officials say the localized approach has been effective in halting or slowing those upticks, and some hotspot areas have seen restrictions eased in recent weeks after cases there declined.

“Unquestionably, we’re in a much better place than we were even just a few weeks ago in Brooklyn and Queens,” Mayor Bill de Blasio said during his daily briefing Thursday.

But new problem spots continue to emerge. City officials said they’re now monitoring two zip codes on Staten Island—10305 and 10314—where the positivity rate has risen above 3 percent. While the uptick isn’t severe enough yet to warrant restrictions under the state rules, the city will be flooding the areas with extra resources to keep it that way, such as handing out masks and opening new testing sites.

“We want to stop it early and get it right,” the mayor said Thursday.

It’s important to respond quickly to any uptick, especially since there’s a lag between when people become infectious to when they might test positive for COVID, says Lee, and some might not get tested unless or until they experience symptoms. As a result, people often spread the virus before they test positive, or take a test at all. With the number of new coronavirus cases skyrocketing across the country, the virus is very much still around. And reported cases are typically an undercount of how many people contracted the coronavirus, Lee adds.

“We can only rely on trends up or down,” he says. “If you don’t see an uptick, it doesn’t mean it’s not happening.”

Restaurants in red zones, for instance, can do takeout or delivery only, while schools and non-essential businesses must close. The red-zone restrictions also include a prohibition on non-essential gatherings, and houses of worship can have just 25 percent of maximum capacity or 10 people, whichever is less.

The state instituted restrictions during the first week of October in several cluster neighborhoods in Brooklyn and Queens, and the numbers since show positivity rates there have become more stable, suggesting the strategy might be preventing the spread of the virus from becoming harder to manage. By Oct. 21, Cuomo announced he would change the designations in Queens “red” zones to “yellow” precautionary zones, where more intensive restrictions on dining, non-essential businesses, non-essential gatherings and schools were lifted the following day.

Those include what is now a yellow zone in Far Rockaway, where the seven-day rolling average positivity rate was 2.26 percent as of Wednesday, up slightly from the previous two weeks but still down from the numbers at the beginning of October, when it stood at 2.71 percent.

In the yellow-zone focus area in Kew Gardens and Forest Hills, the positivity rate was 2.27 percent at the start of October, dropping to 2.03 percent in the middle of the month before increasing again: The seven-day rolling average as of Wednesday was 2.61 percent. Yet for now the area does not meet the criteria that Gov. Cuomo announced toward the end of October to return to the more severe orange warning zone or red micro-cluster zone restrictions.

While Brooklyn’s red zone—which includes parts of Borough Park, Midwood, and Gravesend— is still coded as red, the area’s cases have declined over the course of October since restrictions were first put in place. The positivity rate there was 5.86 percent the week of Oct. 4-10, dropping to 4.44 percent mid-month and declining again this week, with the 7-day rolling average at 3.45 percent on Wednesday.

Emily Goldmann, a professor of epidemiology at the NYU School of Global Public Health who is also trained as a psychiatric and social epidemiologist, says targeting COVID-19 restrictions to specific areas can help reduce both the economic and emotional toll that more widespread lockdown measures might take, while still preventing further spread of the virus from a particular area. And constraining spread helps reserve healthcare resources and prevent a lockdown for the entire city.

The localized approach is still imperfect, though, and there are downsides to implementing different restrictions for different areas. Some have criticized the state’s color-coded method as overly confusing or arbitrary, pointing out that even businesses on the same block can be in different zones, with some businesses open while others nearby must shutter.

“Anytime we draw neighborhood boundaries, there’s a big potential for inaccuracy,” Goldmann says. Many New Yorkers have close connections in other neighborhoods, and other boroughs. “These lines don’t stop the virus. Where people spend time versus where they live may differ.”

“I’m not sure the answer to what’s the best policy to geographically restrict the coronavirus, given all the complexity of human behavior and the way we live our lives,” adds Duncan. “New York City trains allow us a lot of access to different parts of the city.”

He also worries that it can be discriminatory for the broader society to implement public health policy that targets certain areas with greater restrictions. It’s a relevant concern, especially given the disproportionate impact the pandemic has already had on specific groups including Black, Hispanic and low-income New Yorkers. Duncan points to research on the role of spatial stigma, or negative reputation of place, as a social determinant of health.

There’s already been backlash to the localized restrictions: Earlier this month, members of Brooklyn’s Orthodox Jewish communities living in hotspot areas protested the lockdown policies with several nights of rallies, saying they were being unfairly singled out by the state’s rules.

Duncan says policies that feel supportive, rather than restrictive, can go a long way.

That’s the approach the city has taken in neighborhoods like Sunset Park, where the Health Department responded to an uptick in cases over the summer with pop-up testing sites and additional contact tracing. It’s the same strategy the city also plans to employ in the two Staten Island zip codes where cases have risen recently.

“That approach worked, and that approach is what we will employ anytime we see a problem going forward, when we see it isolated to a smaller area and not part of a bigger trend,” like the clusters in Queens and Brooklyn, de Blasio said Thursday.

Goldmann notes that regardless of whether residents live in a zone that has additional restrictions, it’s important for everyone to continue the precautions that have been shown to be effective: Until a vaccine becomes available and gets distributed to the general public, which may still be a ways off, consistently wearing a mask around others, maintaining physical distance from one another and frequent hand-washing are some of the best and only tools we have to prevent the spread of the virus.

Goldmann also advises that people get their flu shots so that there can hopefully be less patients coming into hospitals for flu season, and so the healthcare system is ready to treat more COVID-19 patients, if needed.

“This is so incredibly, incredibly hard,” she acknowledges. “At the same time, I think the idea is to keep this under control so the red, orange, yellow zones don’t get bigger.”

Passengers seated on an MTA Bus.

While New York’s localized containment strategy appears to be fending off a substantial second wave for now, and it remains to be seen whether more widespread lockdown measures lay ahead.

Lee notes that lockdowns occur for one or more of the following reasons: to “stop a runaway train” if the public health risk gets out of hand, to “get a time out” so officials can figure out what’s going on and regroup to determine what changes might be necessary going forward, or to give the healthcare system a break if it’s close to getting too overwhelmed. He says all three of these circumstances were present during New York’s first wave of COVID cases.

As long as one or more of these reasons do not become the reality again, it’s unlikely that the city would face the kind of massive shutdown it did in the spring, Lee suggests. The city is also now better equipped to respond to the crisis: During the first wave, New York did not have the testing and contact tracing resources it has now, Duncan notes. He anticipates businesses like restaurants will find creative ways to stay open this winter with an ongoing pandemic, but doesn’t think people should eat indoors, given the increased risk, particularly to strangers outside of one’s quarantine circle.

“It just takes one person to infect lots of people. We should limit all indoor activities other than people we’ve been spending time in quarantine with,” he says.

“I have no idea what will happen, but nobody does,” Duncan adds.“Coronavirus isn’t going anywhere and if we remember that, that will help. The more we control coronavirus, then we will be able to live our lives more normally.”

Nicole Javorsky is a Report for America corps member.