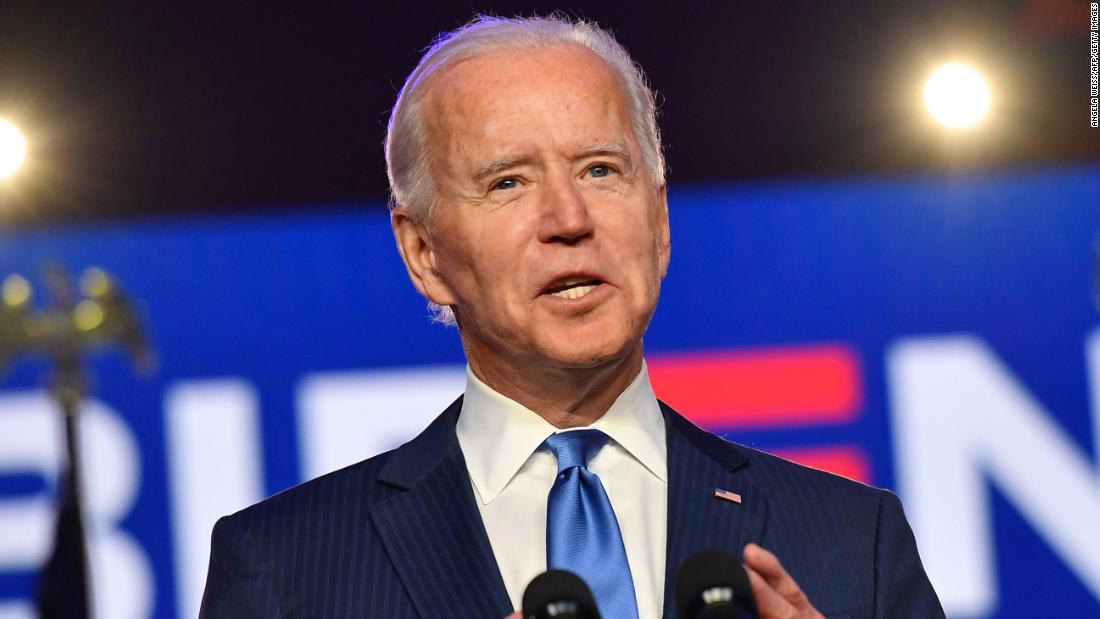 Biden will announce a 12-person coronavirus-task force on Monday, two sources with knowledge tell CNN. The announcement is meant to signify how seriously the president-elect plans to focus on a pandemic that has reached a record number of daily infections in the last week.

The task force will be headed by three cochairs: former surgeon general Vivek Murthy, former Food and Drug Administration commissioner David Kessler and Yale University’s Dr. Marcella Nunez-Smith. The additional members are due to be announced on Monday.

The priority of the task force announcement underscores the urgency of the pandemic and Biden’s intention to try and return the nation’s attention to the virus. The group, along with Biden and Harris, plan to hold frequent televised briefings on the crisis, aides say.

It’s reminiscent of the focus that Biden, and former President Barack Obama, devoted to the economy when they won the White House 12 years ago in the midst of a deep economic crisis. That is the mindset that Biden is taking towards the coronavirus, aides say, in hopes of trying to prevent the pandemic from worsening before they take office on January 20.

The coronavirus upended the presidential election and provided a stark divide in the race, with Biden pledging to take the pandemic seriously, while Trump diminished the importance of the virus and often complained that it was taking up too much focus on the campaign trail — even after he contracted it himself.

Despite Trump’s comments that the virus would go away quickly and that the country was “rounding the corner,” the pandemic has escalated over the last week as votes continue to be counted across the country. On Friday, there were 126,480 daily new cases, per Johns Hopkins University data, the third straight day where the nation has surpassed 100,000 new cases and the highest day of reporting since the pandemic began.

The Biden transition team, which has been working behind-the-scenes since Labor Day, also has preferred candidates in mind for major Cabinet posts that require Senate confirmation and positions inside the West Wing that do not. The Cabinet announcements are not expected for a few weeks, aides said, and some are likely to be delayed even longer until it’s known who will control the Senate following the January run-offs in Georgia.

Ron Klain, a longtime adviser to Biden and his chief of staff during the early years of the Obama administration, is a leading contender to be White House chief of staff, people close to the process tell CNN.

The Biden transition is a robust effort with two Biden advisers, Jeff Zients and Ted Kaufman, taking the primary lead in overseeing these ongoing efforts. Anita Dunn, a senior adviser to the Biden campaign and former White House communications director, is another one of the co-chairs, along with New Mexico Gov. Michelle Lujan Grisham, and Louisiana Rep. Cedric Richmond.

Biden has also pledged to name candidates reflective of the nation’s diversity. Early vetting has already been done for some of the top potential candidates, aides said, but everything will likely be reviewed in the wake of the election results and as questions remain over Senate control.

“There is no room to spare for embarrassment,” said one veteran of the Obama administration, who has informally advised the Biden transition team. “Every Cabinet nomination must be ready to succeed.”

The president-elect, addressing the nation before the race was called on Friday night, said the election gave him “a mandate for action,” nodding to the fact that he believes he and vice president-elect Kamala Harris believe their defeat of Trump gives them the needed political weight to move quickly to roll back aspects of the Trump administration, including his handling of the coronavirus.

Don't Miss it New COVID-19 orders in B.C.: Limits to social gatherings, travel in some regions
Up Next Armenia and Azerbaijan clash over disputed Nagorno-Karabakh region | DW News