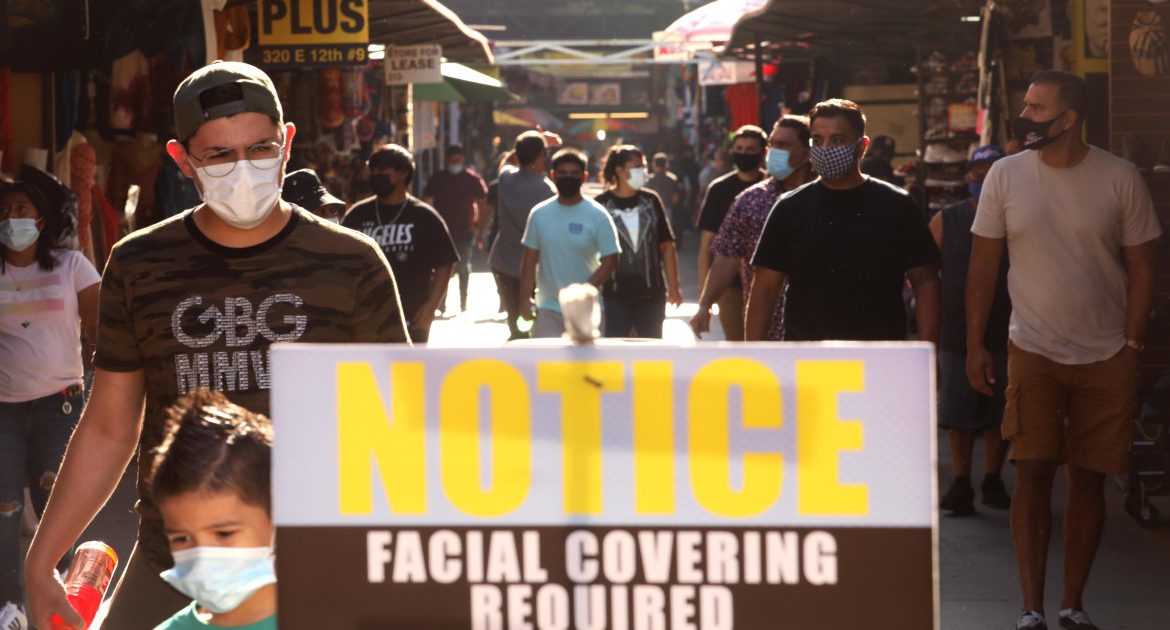 While California has started to see a rise in coronavirus cases, the pace of increase is still far milder than the rest of the United States and experts said there is still time to prevent a “third wave.”

There are clear warning signs, including a troubling increase in daily cases in Los Angeles County. But statewide, the uptick — for the moment — is at a pace still considered relatively slow and top health officials say there’s no conclusive sign of the kind of spike that roiled California this summer.

“We are fortunate in the sense that we have a much more muted uptick that’s beginning to occur,” said Dr. Robert Kim-Farley, medical epidemiologist and infectious diseases expert at the UCLA Fielding School of Public Health. “And I think it’s because we are still adhering, for the most part, to this tiered approach of gradual opening of the economy and schools.”

California’s slow reopening process has prompted criticism from some businesses, such as from some executives of the state’s largest theme parks, which remain ordered shut. Indoor bars that don’t offer meals remain largely shuttered statewide. And in the hardest-hit counties, including Los Angeles, Riverside and San Bernardino, indoor dining rooms at restaurants are ordered closed, as are indoor gyms and indoor houses of worship.

But while that slow-moving reopening strategy may still be frustrating to some, health experts and officials are crediting this framework for keeping California’s hospitals from being overwhelmed in a surge of new cases.

California’s first attempt at reopening the economy in the late spring ended in disaster, with state officials, facing political pressure, agreeing to speed up its pace without meeting its own previously established criteria. That led to a summertime surge in cases that brought California’s deadliest season of the pandemic.

Coronavirus cases in California have risen, but not to the extreme levels seen nationally.

The milder situation currently in California, Kim-Farley said, could be considered “somewhat of a modest success story compared to the rest of the nation.”

While California’s cumulative COVID-19 death toll of more than 17,900 is far worse than some countries — Japan, for example, has recorded only 1,800 deaths — the Golden State still has about half the total deaths of New York, the state reporting the most deaths with nearly 34,000 fatalities.

The number of weekly coronavirus cases California has recorded recently is still far below its worst week. For the seven-day period that ended Thursday, California recorded nearly 34,000 cases. That’s about half as many as California’s worst week, July 17–23, when 66,341 cases were diagnosed.

By contrast, the nation recorded more than 662,000 cases in the last week — the second time in two weeks the nation has posted a new weekly record.

“Part of California’s success is because we have gone really slow with our reopening; that we’ve allowed ourselves time to see how our reopening efforts impact our healthcare delivery system,” said Dr. Mark Ghaly, the California Health and Human Services Agency secretary.

Ghaly said he also believed that California has been helped in places where there’s high compliance with the state’s mandatory mask health order, which he called “one of the most valuable tools at play to reduce transmission.”

By contrast, some of the states seeing the worst per capita coronavirus case rates have residents who largely are not wearing masks.

Across the nation, newly diagnosed coronavirus cases for the first time exceeded more than 100,000 daily in recent days — exceeding the highest one-day totals so far. Since the pandemic began, the U.S. has recorded the highest numbers of coronavirus cases and fatalities of any country worldwide, with more than 237,000 deaths and more than 9.9 million people infected.

The pandemic is rapidly worsening in most states, with the exception of the West Coast, Hawaii, New York, Louisiana and parts of New England, Dr. George Rutherford, epidemiologist and infectious diseases expert at UC San Francisco, said Friday.

On a per capita basis, coronavirus cases have been highest over the last week in the Midwest, where there has been plenty of controversy over managing the pandemic. In Wisconsin, the Democratic governor and the Republican-dominated Legislature and conservative Supreme Court have sparred over control measures.

Texas — which now has more than 19,000 COVID-19 deaths — is now the state with the second-highest number of cumulative COVID-19 deaths, displacing California’s No. 2 ranking in mid-September.

It’s remarkable how much density of infection there is in places such as Illinois, Iowa, Minnesota and scattered across metro areas in the Mountain West, Rutherford said. By contrast, the West Coast has been “relatively spared,” Rutherford said, and “here in California, we continue to be somewhat fortunate.”

Rutherford said he was worried that an uptick in cases that began roughly two weeks ago in California was the start of a significant spike in cases, in which California would be recording 8,000 new cases a day, up from about 3,200 cases a day earlier in October.

But the dire scenario hasn’t happened, at least yet. Over the last week, there’s been an average of about 5,050 cases a day.

“Just because we’ve seen other parts of the country experienced a surge, it’s not a foregone conclusion that we’ll just see it down the road,” Ghaly said. “Our choices matter a great deal.”

Like California as a whole, Los Angeles County has started to see an uptick in cases in recent weeks, but it’s not at the point where it’s a surge that is expected to imminently stress local hospitals.

“There’s definitely surges happening across the country. We’re not seeing that yet here in L.A. County,” said Dr. Paul Simon, chief science officer for the L.A. County Department of Public Health. For the seven-day period that ended Thursday, 10,490 cases were reported, slightly down from the previous week’s tally of 10,987, but still higher than the count of three weeks ago, which was 7,921.

These numbers are still below the worst week of the summer, when more than 22,000 cases were reported July 10–16.

“We’re pretty convinced at this point that these smaller gatherings — where people feel pretty safe because they’re with friends, and extended family — are in fact fueling a lot of the increase,” said Barbara Ferrer, L.A. County’s director of public health. “They’re just not as safe as we would like to believe.”

Seemingly wholesome meals or parties, where people are inside eating and drinking, can easily spread the virus.

“Please don’t bring people inside your house who aren’t a part of your household, because it just keeps accelerating this increase in the number of cases,” Ferrer said. “We, like everybody else, do not want to be at the place where we feel like the only steps open to us are very dramatic sorts of reclosings,” such as those England took on recently.

Other counties in Southern California are reporting week-over-week increases in cases, but at levels still below the summertime spike. For the seven-day period that ended Thursday, San Diego County reported 2,738 cases, up from 2,400 the previous week, but below the high of 3,753 in the mid-summer.

The five-county region of L.A., Orange, Riverside, San Bernardino and Ventura counties reported 18,558 cases in the last week, up from 17,704 the previous week. The numbers are half of what was seen in the summer, where nearly 39,000 cases were reported in one week in mid-July.

The increase in cases is still a sign of concern, and Kim-Farley suspected an uptick in cases reported Thursday and Friday may be related to gatherings around Halloween. If a jump in cases tied to Halloween did happen, that would put the region in a worse place heading into the sequential holidays of Thanksgiving, Christmas and other winter holidays, which risks amplifying the pandemic.

“We are in a critical time where we have many established cultural familial traditions of getting together and celebrating,” Kim-Farley said. “That just really cannot be the same as it was last year.”

The state generally bans large gatherings and has set up the following requirements for how small social private gatherings can occur: outside, with no more than three households allowed, with guests from different households staying six feet from each other, wearing masks when not eating or drinking, serving food and drink in single-serve disposable containers, and limiting the duration to no more than two hours.

“This is not the year to party in large crowds, particularly inside,” said Dr. Grant Colfax, the San Francisco director of public health. “We want to be here for the next holiday season. We want all of us to be here.”

A lot of the concern nationwide is that major transmission occurs in small groups of gatherings of friends and families. Health experts are urging people to not host or attend large gatherings, and say it’s safest to celebrate in person with just members of your household and spending time together with others by phone or web video services.

“With the exception of some large rallies, it seems to be smaller groups of people who are clustering together where most of the transmission is going on,” Rutherford said. “And so the concern is that Thanksgiving, in and of itself — because it is a time when people cluster together with their masks off so they can eat and drink — will be a major amplifier” of the pandemic.

L.A. County officials are also monitoring a worsening in the disparity in coronavirus cases among Latino residents compared with other racial and ethnic groups. The disparity had been improving in August and early September, but began to worsen again in October.