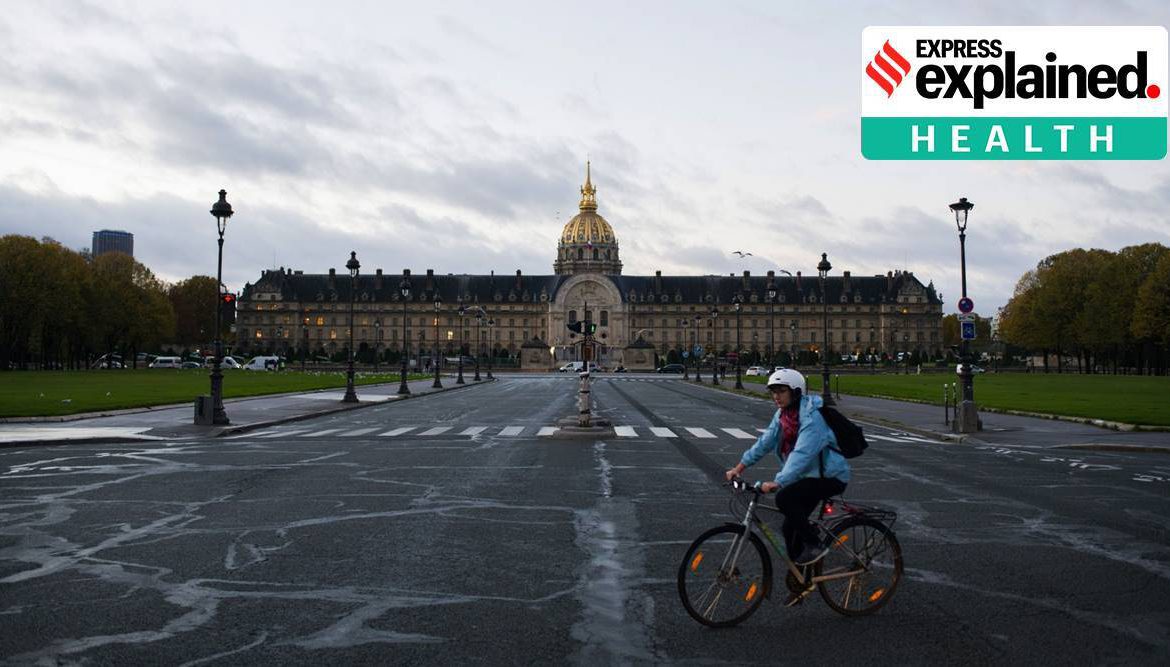 Large parts of Europe are in a second lockdown as a new wave of infection sweeps through the continent. Cases in the US are smashing new records. But overall numbers in India are falling — for reasons not yet fully clear. What is the way forward, given the cost of lockdowns? In an interview to The Indian Express, Professor Sunetra Gupta, a proponent of herd immunity, weighed in on this and related questions.

Is there any precedent from previous pandemics that strengthen the argument for allowing naturally acquired herd immunity in Covid-19?

When a new pathogen enters a territory where nobody has any immunity, it can cause devastation. As soon as some immunity builds up in a population, our relationship with the pathogen changes. Typically, immunity keeps the risk very low. A good recent example is of the Zika virus: it came to Brazil, there was a spate of microcephaly, and now there’s widespread population immunity — this doesn’t mean Zika has disappeared, but the risk is low.

To use the analogy of a cistern, the loss of immunity is just how leaky the system is, so you either get a lot of water draining out or more water coming in, but the level of immunity stays the same. That’s the scenario for most coronaviruses.

You might ask, “What about the water flowing in? Isn’t that new infections?” Well, typically, those will be reinfections. I think we can be fairly confident that, if SARS-CoV-2 behaves like other coronaviruses, those reinfections won’t carry the same risk of severe disease and death.

There are strong paradigms and examples of how herd immunity protects the population. In the first days, you’re dealing with an empty cistern, so you get this big rush of water, but then that stabilises.

How important is herd immunity as a solution, when we are still learning about how long antibodies against Covid-19 last, and some countries are already spotting reinfections?

Antibodies wane, so you cannot use them to declare what proportion of the population has been exposed to the virus. They are the foot soldiers and only a part of the various things we recruit to fight the virus.

Antibodies are only a marker that you have recently been exposed. They do not reflect what’s going on with the immune response, so it’s wrong to say that the decay of antibodies means that protective immunity is decaying.

Previous exposure to other coronaviruses also gives you some immunity to this new virus, so it’s a complex landscape.

When compared with Nordic neighbours, Sweden’s herd immunity model had limited dividends in terms of economic gain. How does it look now, as Europe battles a second wave?

It’s unfair to judge the Swedish model in comparison to other Nordic countries. It’s also not fair to judge it on the basis of how many deaths have occurred within that peak. The truth is, following the same kind of strategy, the level of deaths Sweden achieved was similar to the UK — a more fair comparison. Sweden made the same mistakes of not protecting its care homes as well as it might have done — the Swedes would be the first to admit you can learn from what happened there.

Empty tables of a bar and restaurant in the Covent Garden area of central London. (AP Photo/Alberto Pezzali, File)

Denmark and Norway both managed to control the virus and so, not surprisingly, have had fewer deaths. But, in terms of economic losses, Sweden is part of a network of the global economy, so to say, “They did just as badly as we did,” is, I think, a very flawed argument.

As I understand from speaking to people in Sweden, their goal was to put in place something sustainable… that’s what we should be thinking about.

We’ve also seen approaches like that of New Zealand, which imposed stringent restrictions to eradicate cases. New Zealand’s strategy was to close its borders and hunt down and kill every virus that managed to cross. That isn’t sustainable, unless it wishes forever to exist in a bubble outside of the world economy (unless) a vaccine becomes available. You have to acknowledge this is extremely nationalistic and probably only achievable within very contained, small, affluent states.

I think in developed countries like the UK, the costs of lockdown are profound, but at least the option of shielding the vulnerable is a realistic one. That’s what I think is the reality of the situation, and I’m astonished that, instead of considering the huge costs of a lockdown and how it’s going to send 130 million people into starvation (around the world), people have a monocular vision focused on the virus and stopping deaths from it. Unfortunately, you have to consider the entire cost at an international level, otherwise we’re in dereliction of our duties as international citizens.

So, what approaches globally are good examples of how to best handle this pandemic, especially for a country like India?

Sweden is obviously a good example — not going into full lockdown, but trying at the same time to institute measures with the idea of protecting the vulnerable. My mother is in Kolkata. She and her sister are self-isolating as best they can. Though these options are available to middle-class families, they certainly aren’t in the slums. But then, look at slums like Dharavi — the virus passed through it, lots of people got infected (but) the deaths were low, probably because, among the infected, most people were young. I think there’s a possibility in India that the older generation is more protected because they have some immunity through regular exposure to young people.Shutting down the economy is, almost everywhere, going to cause more harm, and going to disproportionately harm the poor and the young.

A stray dog sits in front of Presidential Guards who perform a shift change during the first day of a lockdown, in Athens (AP Photo/Yorgos Karahalis)

How far is India from achieving herd immunity?

Many pockets in India have already clearly achieved herd immunity, because infection levels are falling naturally. So, we go back to that question, “What do seroprevalence studies indicate about exposure?” The lesson to be learned from these studies is you can’t tell what proportion of the population has been exposed, and when.

In India, there are studies where you get 60-70% antibodies in particular localities. Those are areas where people have been recently exposed, and it has overshot the level required (for) herd immunity. Furthermore, not only do antibodies decay, another thing we know is that not everybody makes antibodies.

I suspect in India, because of continuous exposure to coronaviruses, people have more residual immunity from cross-immunity (which means immunity developed from another coronavirus would help protect against the new coronavirus) In our cistern example, the tank is already half full.

The only thing that tells you what’s going on is when infection and deaths start to come down. India is a very big country, it will happen region to region, but it will happen. I haven’t looked at all the data carefully, but I imagine by now, most parts of Maharashtra must be… But then, there will be other areas (where immunity has not progressed that much). 📣 Express Explained is now on Telegram

Data suggests around 10% of deaths in India are of those aged 26-44. Which age groups should be allowed to live their lives normally, and with what caveats?

The data needs to be looked at carefully. We know there’s an age link, and in terms of who should go back to work, certainly the data from the UK and many other countries suggest people in that age bracket (26 to 44) have very low risk. In the UK, (Prof) Carl Heneghan (of Oxford University) has done a thorough analysis of deaths. Even in the elderly, the people who have died were people with some form of comorbidity. The likelihood of dying, if you’re fit and healthy, is quite low, even among the elderly. But it’s going to vary from region to region.

There are all sorts of ways in which younger people also need to think about protecting themselves. Reducing exposure, even among those who are young, should still be part of the thinking. All of this needs to be discussed.

I’ve been calling for a perspective that isn’t centred on Western, affluent countries who can say, “Hey, we’re going to lock down now because, otherwise, you’re going to have deaths.” Let’s get it in perspective — this is a terrible event, but we have to find solutions sustainable for not just those living in luxury, but a very vast majority of the world that isn’t.

Earlier this year, you suggested London had possibly already achieved herd immunity. Are there any additional learnings that strengthen or modify your views? London, I imagine because of the lockdown, got close to herd immunity, but didn’t overshoot it necessarily.

I think it’s still the case that we don’t know whether Covid-19 circulated in January and February by the time we got the data in May… It’s likely there was a considerable contribution of population-level immunity to the observation. We observed infection levels were very low over the summer in London, so that’s not consistent with there not being any herd immunity.

What’s happening now is the typical rise you see in the winter months for any respiratory infection. When students arrive from different parts of the country to universities, if they’re not immune, they’ll pick up the infection. It’s not at all surprising that infection levels are going up this time of the year. But deaths aren’t going up quite in the same way, so, I think there is a strong contribution at the moment of herd immunity.

Don’t miss from Explained | Likelihood of future pandemics, their damage potential, as per a new report

Professor Sunetra Gupta is professor of theoretical epidemiology at the University of Oxford. Her research is focused on the evolution of diversity in pathogens, especially infectious disease agents. She has been among the most quoted experts in reports, research and commentary globally on the pandemic. Professor Gupta is one of the authors of the October 4 Great Barrington Declaration, which calls for allowing those at minimal risk of death from Covid-19 to live their lives normally, while better protecting those who are at highest risk.

Don't Miss it Coronavirus live news: US nears 10m cases as global infections pass 50m | World news
Up Next Taiwan not invited to WHO meeting despite COVID-19 success | Taiwan