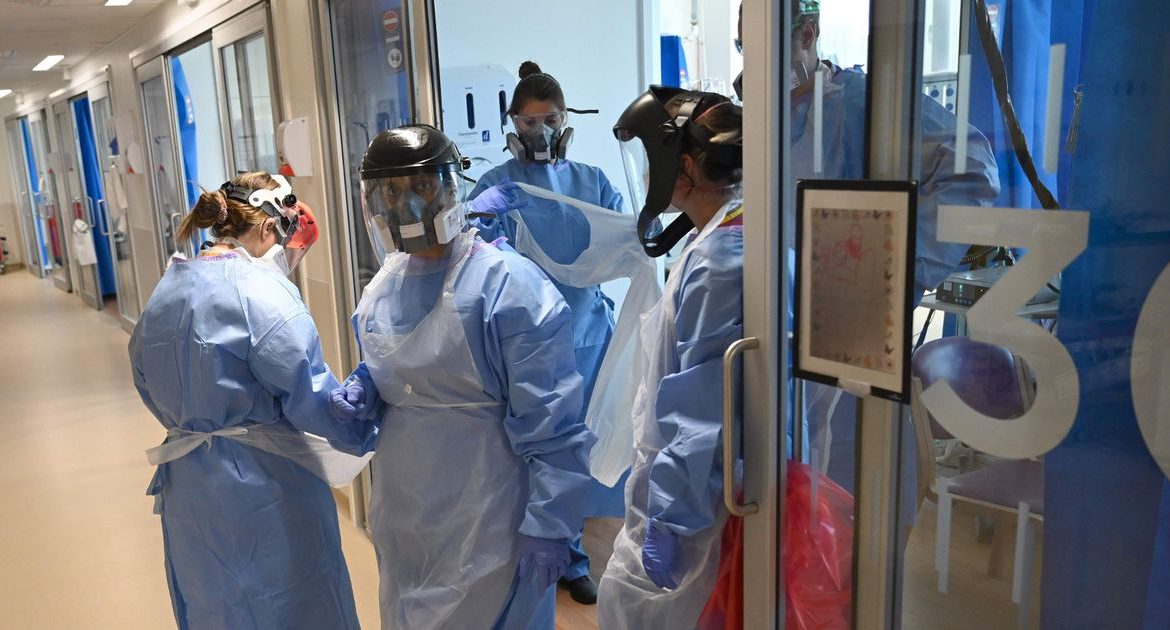 Exhausted NHS staff could quit in their droves after the Covid-19 second wave, unions representing the workforce have warned.

Unions representing 1.3 million staff today publish a joint letter to the Prime Minister today asking him to support those he dubbed the “beating heart of the nation”.

The 14 health workers unions are demanding a commitment to this year reward the heroes battling to keep the NHS from being overwhelmed.

It comes on the day inflation means many NHS workers including porters and cleaners are no longer getting the Real Living Wage.

The Living Wage Foundation today (Monday) announces its new rate – independently calculated based on what people need to live on – of £9.50 an hour.

Exhausted NHS staff could quit in their droves
(Image: POOL/AFP via Getty Images)

Unison, Unite and the Royal Colleges of nurses and midwives say a pay boost is vital to prevent departures and encourage new recruits.

They write: “They feel stressed, burned out and fearful. It is increasingly unrealistic to ask them to carry on regardless.

“The pandemic has affected staff profoundly and many may not stay around when the job is done. Raising pay this year could persuade them to change their minds and prove attractive to thousands of much-needed potential NHS recruits.

“The Scottish government has already made this commitment.”

The NHS is teetering on the brink as the UK enters a second Covid-19 lockdown and hospitals in hotspot areas are starting to again cancel planned treatments.

The letter continues: “Times may be tough, but you know this is the morally the right decision to take.

Kate Bingham is the chair of the government’s vaccine taskforce
(Image: Unknown)

“As you said at the Daily Mirror’s Pride of Britain awards last weekend, NHS workers are the ‘beating heart of the nation’.

“It’s time to do more than praise their courage and dedication.”

UNISON’ head of health Sara Gorton said: “The NHS can’t run without its staff. They all deserve better from porters to nurses.

Michelle Tymon is as a domestic cleaner at Blackpool Victoria Hospital

“Their dedication during the pandemic has been humbling. But no one is superhuman and many are feeling the strain.

“Boris Johnson must show he has a heart with a pay rise before Christmas.

“It will boost exhausted staff going into the second wave and help the NHS attract much-needed new recruits.”

Hannah Reed, national officer at the Royal College of Nursing, said: “NHS staff have been underpaid for years and there has never been a more critical time for the Government to address this.

“Paying staff fairly will show that they are valued and begin to turn the corner on the record nursing and wider vacancy levels.

“The NHS is facing an extremely challenging few months due to the combination of Covid-19 and winter pressures.

“Without urgent action on pay, vacancies across the NHS will continue to increase.”

Jon Skewes, director at the Royal College of Midwives, said: “I call on our Prime Minister to show that he meant his fine words about the work of our NHS staff during the first wave of the pandemic and give them the pay award they rightly deserve.”

A spokeswoman for the Department of Health and Social Care said: “We are grateful for the hard work and dedication of our frontline staff,

particularly during the pandemic.

“NHS staff benefit from the final year of a three-year pay deal, agreed with trade unions, which has delivered year-on-year pay increases. The independent NHS Pay Review Body makes recommendations to Government on pay increases for NHS staff and we will consider their advice when we receive it.”

You will be all too aware that tough times lie ahead for the NHS and the nation.

Winter’s here, Covid-19 rates are rising fast again, and hospitals are admitting more infected patients than before restrictions were announced in March.

With a second wave upon us, intensive care units are under immense strain, with some rapidly nearing full capacity, and the Nightingale hospitals are on standby.

Once more NHS staff will be relied upon to protect and care for us all. But health workers are exhausted, with many still recovering from the first virus peak. They’re anxious too, especially as they know what’s coming this time.

There’s also the added pressure of treating non-Covid patients from the backlog of cancelled appointments and operations from earlier in the year.

They feel stressed, burned out and fearful. It is increasingly unrealistic to ask them to carry on regardless.

As you know, NHS staff are due a pay rise in April. But if ever there was a time for their dedication and skill to be appreciated – and that increase to come early – it’s now.

A significant increase this year would help health workers feel valued, by the entire country, and the government too. But bringing forward the wage rise in time for Christmas would also place the NHS in a better position to face the future.

The pandemic has affected staff profoundly and many may not stay around when the job is done. Raising pay this year could persuade them to change their minds and prove attractive to thousands of much-needed potential NHS recruits.

The Scottish government has already made this commitment.

NHS staff are not simply motivated by pay. They do their jobs because they’re passionate about making people well again, and because they want to make a difference.

Times may be tough, but you know morally this is the right decision to take. As you said at the Daily Mirror’s Pride of Britain awards last weekend, NHS workers are the ‘beating heart of the nation’.

It’s time to do more than praise their courage and dedication. Grant them – and the NHS – the early pay increase they all deserve.