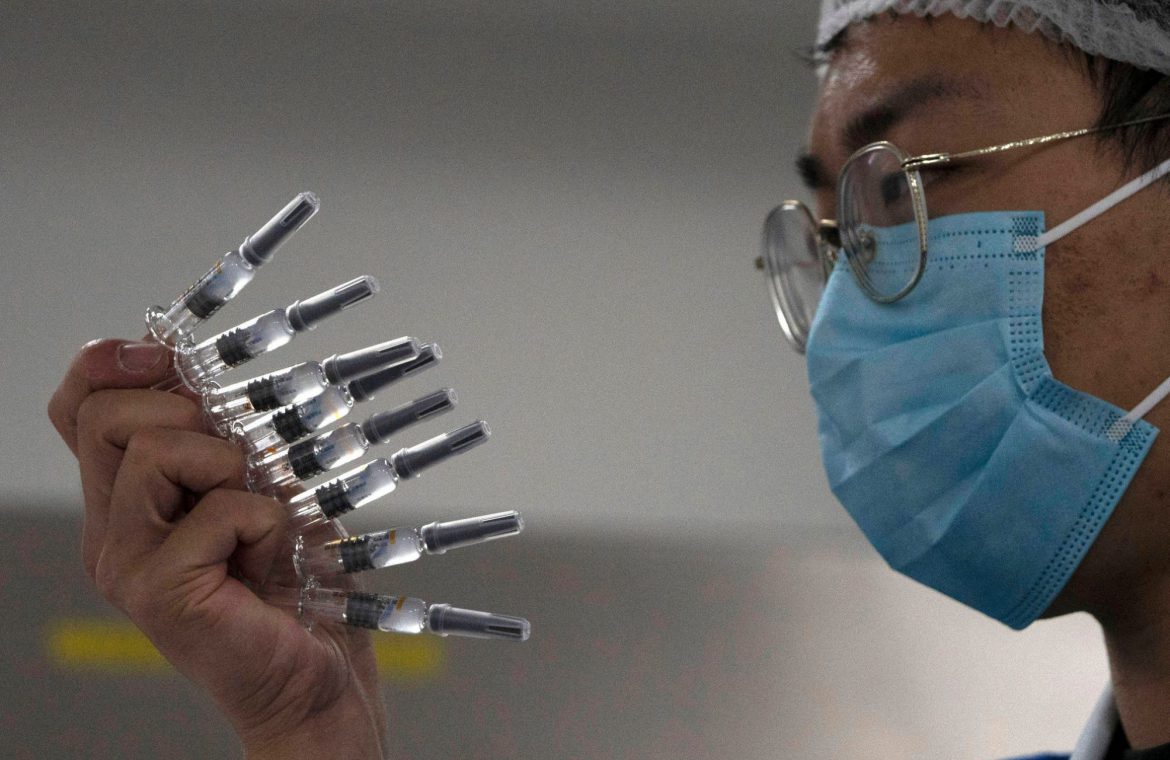 A Sinovac employee manually inspects syringes of its COVID-19 vaccine candidate at its factory in Beijing on September 24, 2020. Ng Han Guan/Associated Press

Brazil’s Butantan medical research institute has been working with the Chinese private biotech on clinical trials of its vaccine in São Paolo since July.

But Anvisa, Brazil’s health regulator, said on Monday that a “serious adverse event” occured on October 29 and that the trial was now suspended.

Buntantan director Dimas Covas said a death had taken place, but that it was unrelated to the vaccine, Reuters reported. Sinovac said on Tuesday it was “confident in the safety of the vaccine.”

The news of the trial suspension came hours after Pfizer announced that its rival trial vaccine, developed with BioNTech, had 90% efficacy.

Brazil suspended clinical trials of one of China’s coronavirus vaccines on Monday, following a death that researchers said was unrelated to the drug.

The government’s Butantan Institute, based in São Paulo, has been conducting clinical trials for Sinovac using its prototype vaccine since July 3.

But in a statement released on Monday, Anvisa, the Brazilian health regulator, said that a “serious adverse event” occured on October 29, and that the trial had been suspended.

Dimas Covas, the director of the Butantan Institute, told local network TV Cultura that a death had occured, but that it was unrelated to the vaccine, according to Reuters.

“As there are more than 10,000 volunteers at this moment, deaths can occur … It’s a death that has no relation with the vaccine and as such it is not the moment to interrupt the trials,” he said.

Anvisa said it would not release any more information about the death.

São Paulo State Governor Joao Doria with a box of the COVID-19 vaccine produced by Sinovac at a press conference on July 21, 2020. NELSON ALMEIDA/AFP via Getty Images

“Data on clinical research volunteers must be kept confidential, in accordance with principles of confidentiality, human dignity and protection of participants,” it said.

“With the study interrupted, no new volunteers can be vaccinated.”

In a statement posted to its website on Tuesday, Sinovac said its vaccine was not to blame.

“We learned the head of Butantan Institute believed that this serious adverse event (SAE) is not related to the vaccine,” it said.

“We are confident in the safety of the vaccine.”

The Butantan Institute is to hold a press conference at 11 a.m. local time (9 a.m. ET) on Tuesday, according to the BBC.

The news of the trial suspension came hours after Pfizer announced that its rival trial COVID-19 vaccine, developed in partnership with BioNTech, announced it had 90% efficacy.

The Sinovac trial vaccine is one of a number that China has approved for emergency use and has been giving to frontline health workers and their families for weeks.

Read more: We just got our first evidence that a coronavirus vaccine works. Here’s everything we know about the race for a vaccine and when you might be able to get a shot.

Pausing vaccine trials is not uncommon.

On October 12, Johnson & Johnson paused its coronavirus vaccine trial after a participant developed an unexplained illness and, in September, AstraZeneca paused its trial over concerns that a participant in the UK might have had an adverse reaction.

In late October, a 28-year-old volunteer in AstraZeneca’s coronavirus vaccine trial in Brazil died from complications of COVID-19, though the country’s O Globo newspaper said the participant was given a placebo instead of the trial vaccine.

A representative for the Oxford Vaccine Group, which is developing the vaccine with AstraZeneca, told Business Insider at the time it would continue the trials because there were “no concerns about safety.”

While Brazil’s government is working with Sinovac to develop a vaccine, President Jair Bolsonaro announced in August that his government would set aside $360 million to secure 100 million doses of AstraZeneca’s vaccine.

Don't Miss it Concerned about possible COVID-19 outbreaks, CBSA frees most migrants from detention centres
Up Next UK coronavirus LIVE: Matt Hancock says NHS workers will ‘inject hope into millions of arms’ as vaccine set to roll out next month