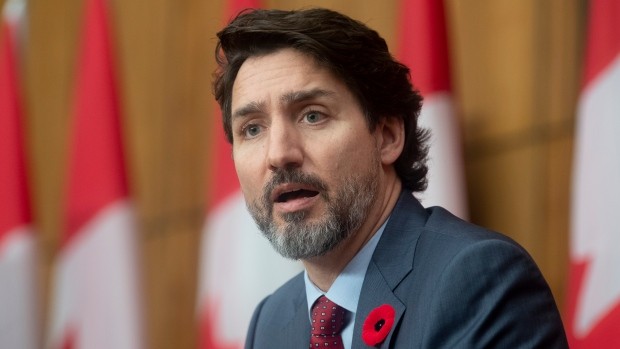 OTTAWA —
Citing “concerning” record-breaking spikes in new COVID-19 cases across the country, Prime Minister Justin Trudeau is imploring provinces not to keep sectors of the economy open if it’s putting Canadians at risk, and to reach out for more help from the federal government if they need it.

“With rising cases of COVID-19 here at home, there’s added pressure on all orders of government to keep people safe, and to protect jobs. But I would hope that no leader in our country is easing public health vigilance because they feel pressure not to shut down businesses or slow down our economy,” Trudeau said during a press conference in Ottawa on Tuesday.

“I understand that worry, but let me tell you: that’s how we end up with businesses going out of business, and the economy damaged even more. Beating COVID is the only way to protect our economy,” he said.

The prime minister said he knows people are trying to find a balance between adapting to the now months-long reality of living life differently due to the pandemic, and not becoming complacent with the personal and societal precautionary measures in place.

In his view, the federal financial aid measures his government has offered since March—including $19 billion in “safe restart” funding for provinces—have been intended to allow provinces and regional public health authorities to make the tough but necessary decisions around closures and restrictions to keep COVID-19 under control.

“Job one right now is keeping people safe,” he said. “If businesses continue to suffer under surges of COVID-19, the damage will be longer lasting than targeted shutdowns.”

Asked for specific examples of rules or lack thereof that he finds the most troubling—whether it’s bars or gyms being operational in some places for example—Trudeau said it’s not up to the federal government to “decide who closes down where and how fast.”

On Tuesday, just as the province began recently easing restrictions in some high-infection zones, Ontario recorded a record-breaking 1,388 new infections. In Manitoba the government has just announced the entire province is moving under “Code Red” critical restrictions after seeing a surge of new cases in recent days.

Ontario Premier Doug Ford responded directly to Trudeau’s remarks on Tuesday, saying he doesn’t know if the prime minister was directing his comments at him, but if they were, Ontario businesses need more support.

“We need more support, financial support, and I’d be more than happy to sit down and talk to the prime minister about that support,” Ford said, adding that there are still pre-promised federal funding that has yet to flow.

Ford said his government is concerned about the increasing spread, but that to date Ontario is “sparing no expense or sparing no resources.”

In unveiling his provinces new lockdown measures after initial steps proved to not be enough to slow the spread, Manitoba Premier Brian Pallister said that from Quebec to British Columbia, provinces are proving to be harder hit by COVID-19’s second wave than they were during the spring surge.

“When we were abiding by the fundamentals we were beating COVID, then some of us lost our way and now COVID is beating us,” Pallister said.

Trudeau said the situation is “really concerning,” but as has been his position over the course of the pandemic, he doesn’t think the Emergencies Act—which grants “extraordinary powers” to enact certain nationwide security measures—is needed.

“I’m imploring the premiers and our mayors to please do the right thing: Act now to protect public health. If you think something is missing in the support, we’re offering for your citizens, tell us,” Trudeau said. “Whatever it takes, however long it takes.”

Asked if the government is considering stepping in and imposing tougher restrictions if regions don’t heed his call to do “the right thing,” Trudeau didn’t say, but did suggest that quick action has been shown to work to get resurgent spread under control in other countries and if provinces take those kinds of lockdown measures, the federal government would support their residents.

During the press conference, the prime minister also provided an update on the state of the federal government’s procurement of key COVID-19 supplies.

Over the last few days the government has sent more than 1.2 million pairs of nitrile gloves to frontline workers; provided more than 3.3. million rapid tests to the provinces and territories; and secured a new deal for 7.6 million rapid tests and more than 2,100 analyzers that will be delivered by global medical technology company BD in the coming weeks.

“It is clear we have yet to bend the curve on accelerated growth in Canada,” Tam said. “It’s time to get really serious. Going into this respiratory season, COVID-19 is already well ahead of us.”