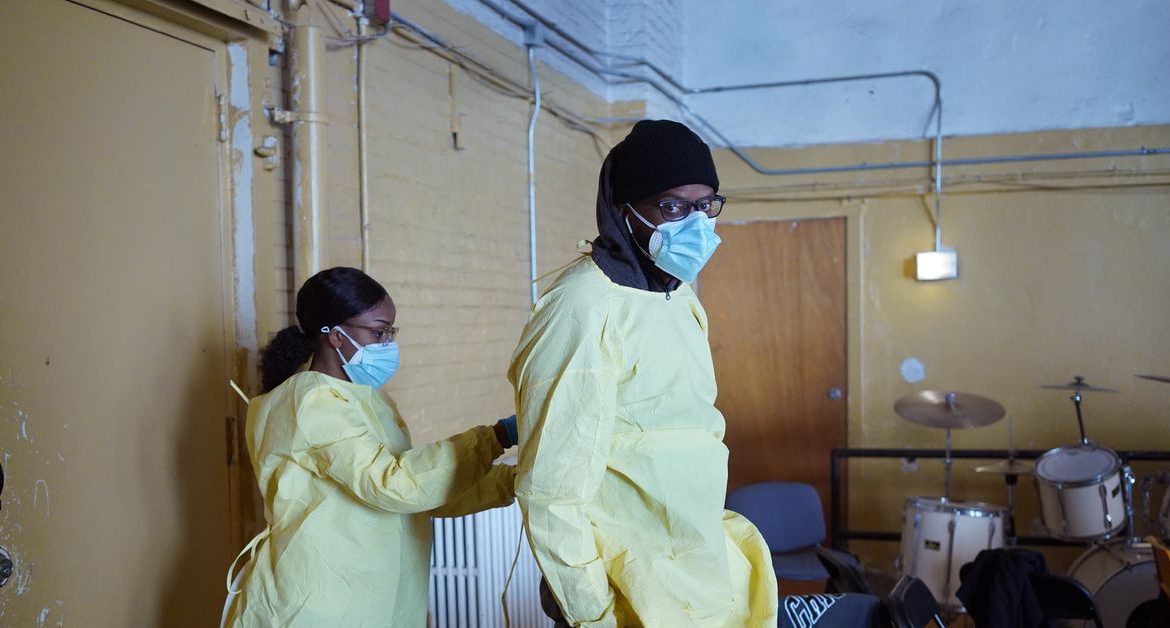 Illinois reported more new coronavirus cases on Friday — 15,415 — than any other state in the nation has ever logged in a single day throughout eight months of the pandemic.

The jaw-dropping count marked the fourth straight daily record-breaking rise in an exponential explosion of infections with COVID-19 “running rampant through our communities,” according to Illinois Public Health Director Dr. Ngozi Ezike.

Gov. J.B. Pritzker has not yet handed down a statewide stay-at-home order like the one that helped bend the curve of the springtime peak, but he’s suggested a new edict could come soon.

Either way, the only hope for Illinois to come down from its current “crisis level” is for residents to take precautions more seriously, the Democratic governor said.

“There’s got to be some personal responsibility that gets taken by not only people for wearing masks in their communities, and asking their neighbors and friends who are not wearing masks to wear them, but also the local leaders, as I’ve said, who are taking no responsibility,” Pritzker said. “That is the conspiracy that is working against the people of the state of Illinois.”

Friday’s case total included almost 3,000 more infections than were reported a day earlier. The state’s 25 highest daily caseloads have all come in the past four weeks.

Even during the worst days of the New York crisis in April, that state never topped 13,000 cases. Nor did California during its initial peak in July, according to data compiled by The New York Times. During their summertime surges, only Florida (15,300) and Texas (15,038) previously hit the staggering mark that has now been surpassed by Illinois.

Still, cases are on the rise nationwide, and Illinois has one of the most robust testing programs. Its new cases were confirmed among a record-high 106,540 tests submitted to the Illinois Department of Public Health, raising the average statewide testing positivity rate over the past week to 13.2%. That number has almost tripled over the last month, suggesting the virus is spreading more rampantly than it has since mid-May.

Hospitals across the state are bracing for a devastating surge of coronavirus patients as they continue to admit the most people diagnosed with the disease they’ve ever seen. On Thursday night, 5,362 beds were taken up by COVID-19 patients, an increase of 104 people from the previous night. Some hospitals are already approaching capacity.

“If we keep doing everything we’re doing and not changing — no measure that we can do at the state level is going to allow us to have enough [hospital] beds,” Ezike said. “Everybody’s saying, ‘What are we going to do?’ What are you going to do? Individuals need to take the responsibility to control this virus. … Step up and stop looking for somebody else to do the job that we individually have the power to do.”

Since March, nearly 552,000 people have tested positive for the virus in Illinois, about 4.4% of the population. Roughly 40% of all cases have surfaced in the last month alone.

All but six of Illinois’ 102 counties are considered to be at a coronavirus warning level, including the entire Chicago area.

The Cook County stay-at-home advisory takes effect at 6 a.m. Monday and lasts at least 30 days, cautioning residents to “refrain from any nonessential activities and stay home.” Among the activities considered essential are work, school, coronavirus testing, getting a flu shot and shopping for groceries.

“Warning level” counties are marked orange in this map.

Any other nonessential gatherings and travel should be put on hold, officials say, including vacations, social calls and, yes, holiday celebrations.

“Now more than ever, we must come together to stay apart,” the county’s senior medical officer, Dr. Rachel Rubin, said in a statement. “We know limiting gatherings with friends and family can be hard, but we also know that virtual celebrations will save lives.”

County officials are also calling on employers “to reestablish telework protocols for staff who are able to work from home.” The advisory does not call for any business closures.

More than 99,000 people in Cook County have contracted the virus so far, accounting for almost 20% of all the cases logged in the state during the pandemic. The county’s average testing positivity rate has more than doubled over a span of about three weeks to 15%.

As always, residents are urged to wear masks over their faces and noses, to maintain 6 feet of social distance and to regularly wash their hands with soap and warm water.